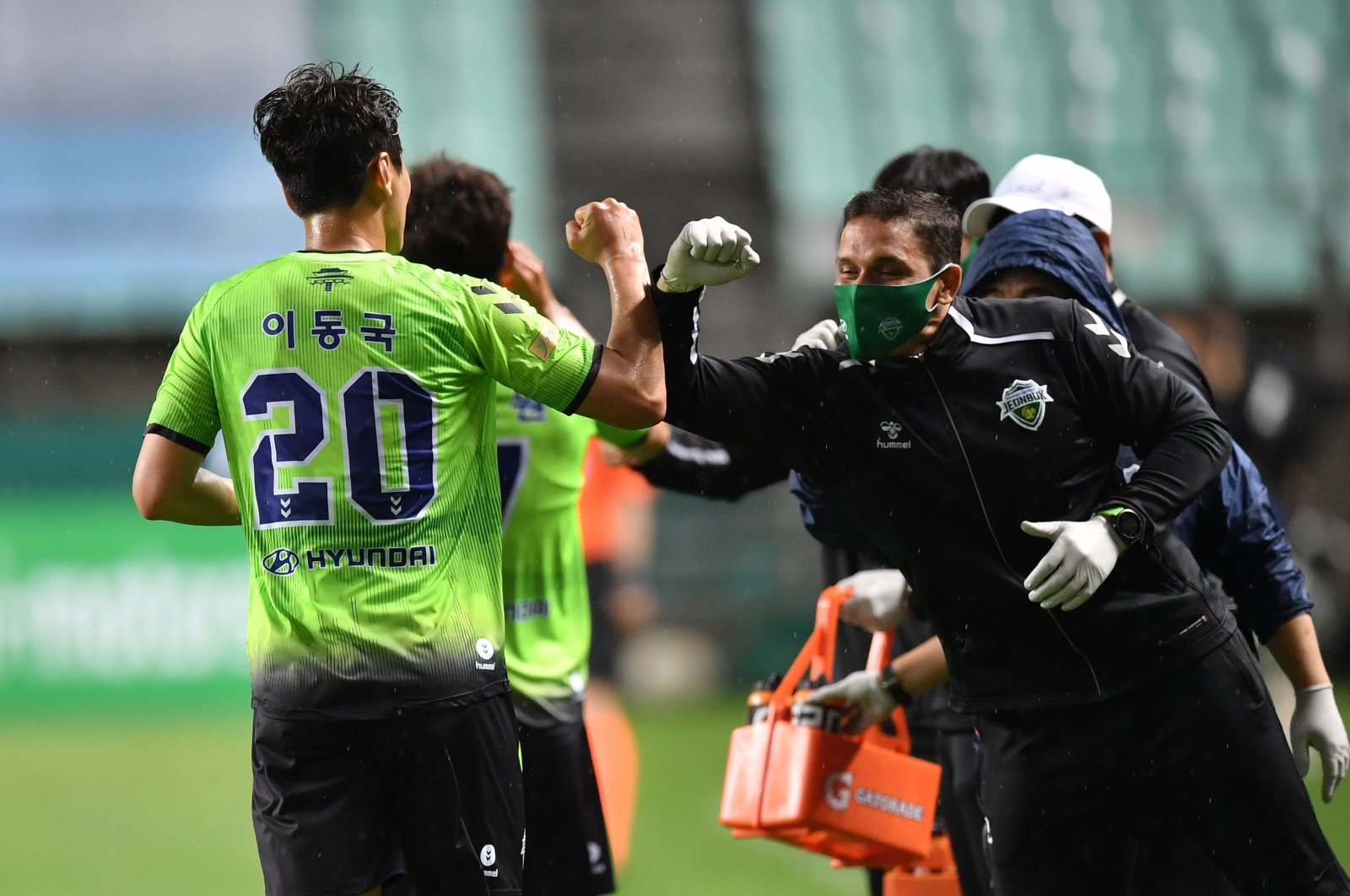 Jeonbuk Hyundai Motors' Lee Dong-gook (L) celebrates his goal with his mask-wearing team staff by bumping elbows to as a precaution against the pandemic, in Jeonju, South Korea, May 8, 2020. (AFP Photo)
by French Press Agency - AFP May 08, 2020 6:12 pm
RECOMMENDED

Football teams will be allowed to use five substitutes when play resumes after the coronavirus pandemic, the sport's law-making body announced on Friday.

The International Football Association Board (IFAB) said in a statement that it had agreed to a proposal by the world governing body FIFA for a temporary change to the rules "to protect player welfare."

Teams face likely fixture congestion in a packed calendar as they attempt to make up for the lost time when play can resume.

The lay off is expected to have an impact on player fitness levels too.

It also said that competitions which were using video assistant referee (VAR) would be allowed to drop it for the time being.

The change will apply to competitions scheduled to be completed by Dec. 31 of this year, although FIFA and IFAB left open the possibility that the period could be extended.

While teams will be able to make five substitutions, "to avoid disruption to the game, each team will only have three opportunities to make substitutions" as well as at half time or before extra time.

In competitions that allow another replacement in extra time, teams will have an additional substitution opportunity.

The previous limit on outfield substitutes for top-level competitions has been three in regulation time.

The IFAB said the change had been made "as matches may be played in a condensed period in different weather conditions, both of which could have impacts on player welfare."

It added that "the decision on whether to apply this temporary amendment will remain at the discretion of each individual competition organizer."

It said that, together with FIFA, it "will determine at a later stage whether this temporary amendment would need to be extended.

That means the measure could be maintained for the whole of the 2020-21 season and right through to the next European Championship, which was postponed by a year until June and July 2021 because of the pandemic.

"If the measure is still in force, UEFA could then adopt it for the Euro," a source said.

It remains to be seen if the measure could be left in place permanently, but doing so may play into the hands of the wealthiest clubs with the largest squads and greatest strength in depth.

The announcement comes a day after the Spanish Football Federation (RFEF) said it had proposed allowing teams in Spain to make five substitutions if matches resumed in the country.

Thursday's statement said that it was the RFEF who raised the possibility of introducing the measure to FIFA "more than a month ago."

The statement also said that La Liga chief Javier Tebas had shown support for the move, which takes a similar format to IFAB's.

"With this proposal, the federation wants to go ahead and propose measures that favor the health of footballers," said RFEF president Luis Rubiales.