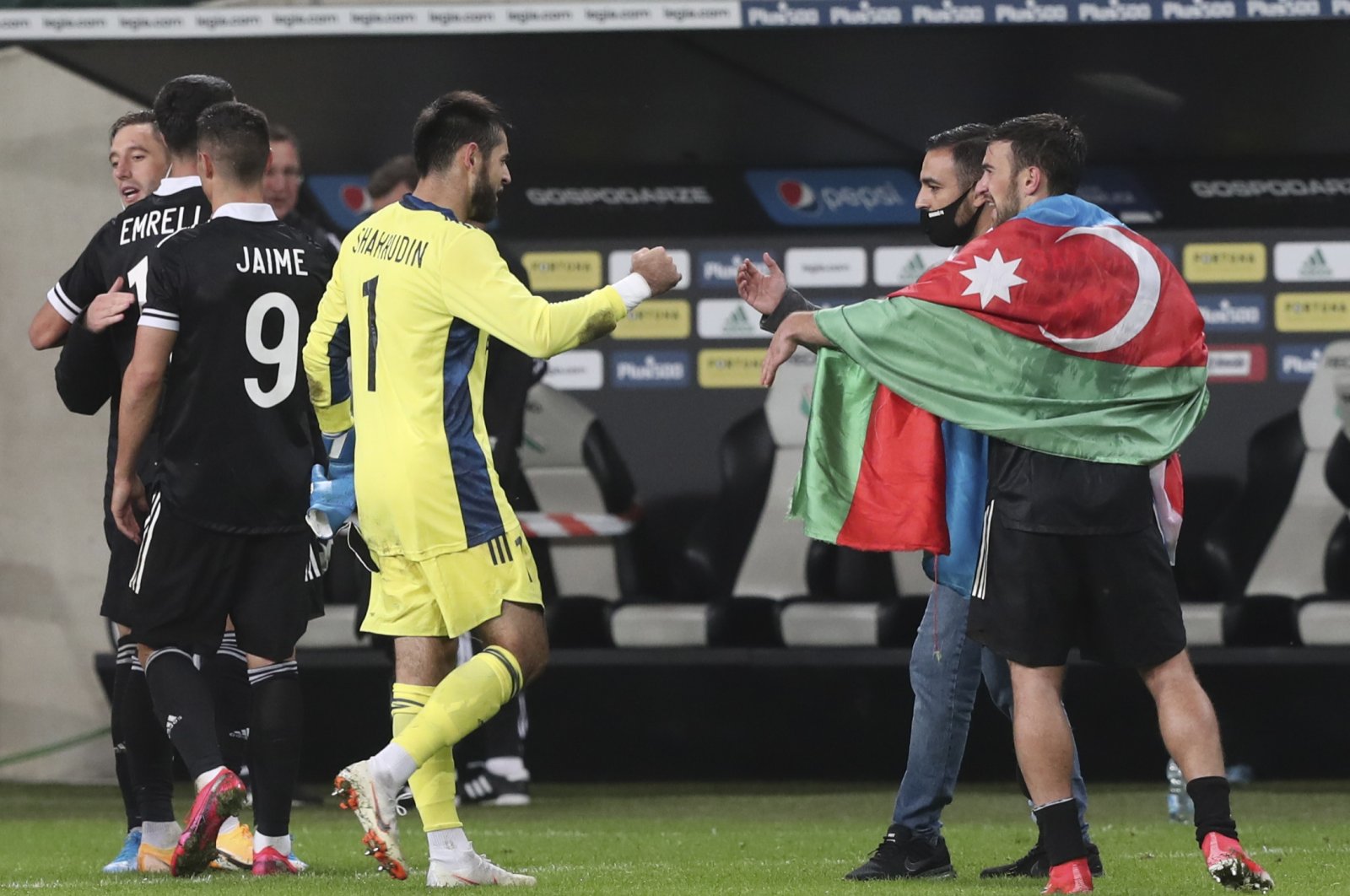 Qarabag's Qara Qarayev, with an Azerbaijani flag, and his team celebrates after the Europa League football match between Legia Warsaw and Qarabag, in Warsaw, Poland, Oct. 1, 2020. (AP Photo)
by REUTERS
Nov 02, 2020 3:42 pm

Azerbaijan's football champion for the last seven years, Qarabag FC has hoped for a different sort of victory since war returned to the region they were forced to flee nearly 30 years ago.

The exiled club, known as "The Barcelona of the Caucasus," has ambitions to return to Aghdam, a city near the front line of a conflict with Armenia over occupied Nagorno-Karabakh.

Qarabag's sometimes bellicose attitude has earned them support across Azerbaijan but courted controversy elsewhere. The club were reprimanded by UEFA for a military salute during a match in Poland last month.

The mountainous enclave of Nagorno-Karabakh and seven surrounding regions, including Aghdam, are internationally recognized as part of Azerbaijan but occupied by ethnic Armenians who claim it is part of their historic homeland.

The latest fighting began on Sept. 27 and is the worst in the South Caucasus region in more than 25 years. The death toll has surpassed 1,000 and could be much higher.

Qarabag – the name means Karabakh, transliterated from Azerbaijani – left Aghdam in 1993, along with most of the ethnic Azerbaijani population. About 30,000 people were killed in the 1991-94 war, including Qarabag's then head coach Allahverdi Bagirov.

Originally formed in 1951 as Mehsul FC, the club had several names before adopting the current one. Their crest features two rearing Karabakh horses, a breed considered nearly extinct, which gives Qarabag their other nickname – the Horsemen.

The club, who play in black and white, are owned by Azersun Holding, a company founded by tycoon Abdolbari Gozal, Azerbaijan's largest food producer and exporter.

"I hope, God willing, the day will come when Qarabag FC will officially be based in its native land," said Medvedev, an ethnic Russian born and raised in Baku. He speaks both languages and is also captain of Azerbaijan's national team.

"You wouldn't believe how many people would come to the games and how enthusiastic they were," he said, referring to matches played in Aghdam. "People would climb on the fences and hang, or sit there throughout the whole match."

No spectators are permitted at Qarabag's home matches in Baku's Azersun Arena due to the COVID-19 pandemic.

Inside the stadium, on a wall decorated with flags presented by past opponents, hangs a memento of another former Soviet club driven by war from their home, Ukrainian champion Shakhtar Donetsk, which has played its home matches elsewhere since 2014.

At the club's training ground, players run in the shadow of giant billboards proclaiming the latest Twitter comments by President Ilham Aliyev – lists of districts lost and liberated.

This has not gone unnoticed in Yerevan.

The Football Federation of Armenia on Saturday called for Qarabag to be expelled from European competition for comments, since deleted, made by a club official on social media.

The federation said in a statement it had made numerous complaints to UEFA and FIFA about "the belligerent publications, militaristic behavior and anti-Armenian posts of various representatives of Azerbaijani football."

UEFA, European football's governing body, has said club and national team matches will not be permitted until further notice in Azerbaijan or Armenia because of the conflict.

Qarabag's fan base is nationwide, Medvedev said, partly because of its success – it was the first Azerbaijani side to play in the Champions League group stages – but also because it represents a region Azerbaijan has long yearned to liberate.

"Aghdam is our town, an Azerbaijani town, and Qarabag must return home," said Gamid Gamidov, a Baku resident and supporter of the club. "Wherever it is based, I am sure the whole of Azerbaijan will continue to support it."