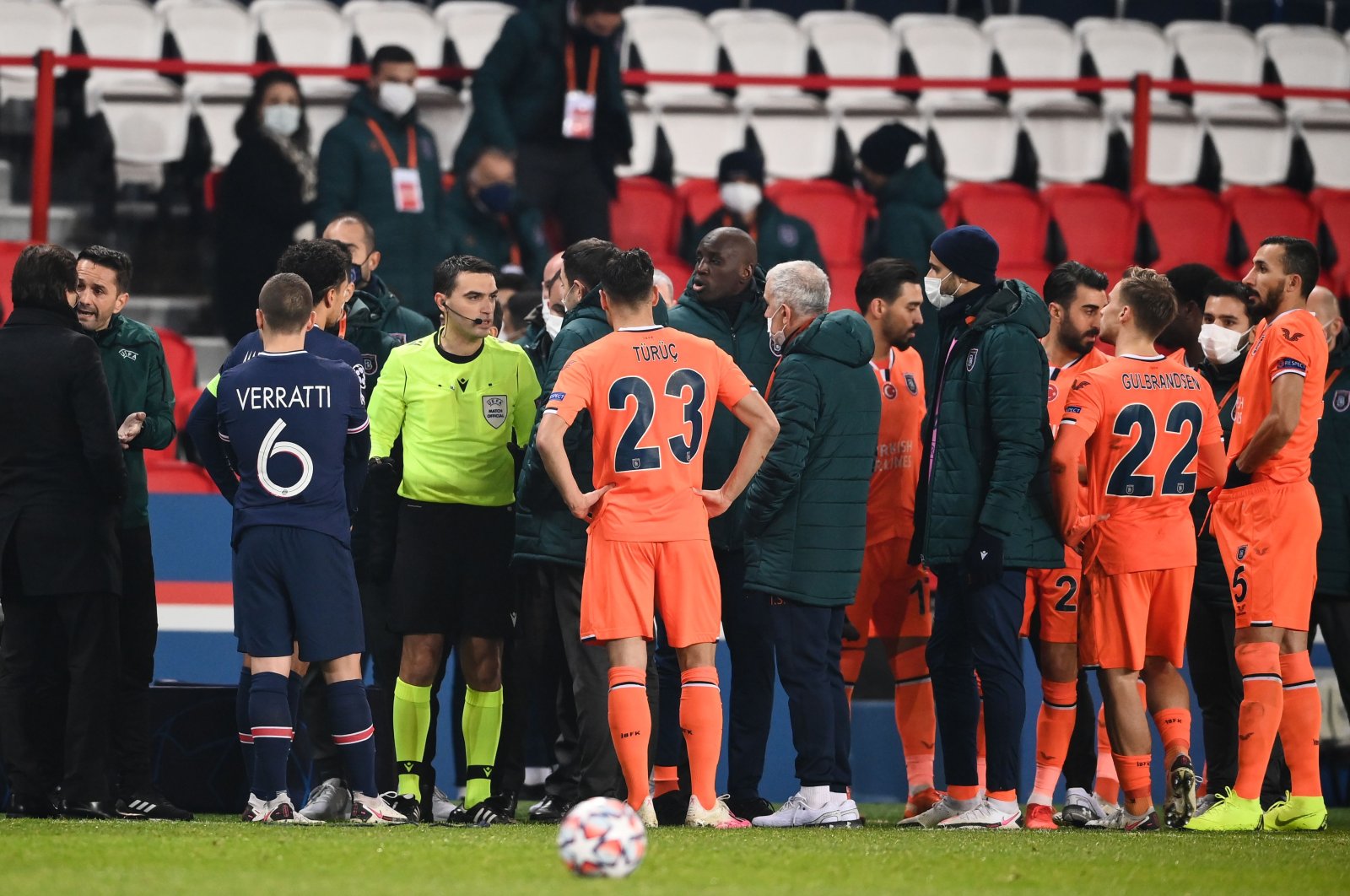 The racist attack targeting a staff member of Istanbul Başakşehir highlighted how deep the racism problem runs in football, despite millions of dollars spent by UEFA and FIFA on anti-discrimination campaigns

Players have taken a knee, unfurled slogans and demanded tougher action only to find football – their working environment – remains infected with racism.

The tipping point might just have come, with players of both teams in Paris taking the ultimate step by refusing to continue playing.

At the end of a year of striking gestures against racial injustice and discrimination, the Champions League produced one of football’s most powerful shows of solidarity against racism when players from Paris Saint-Germain and Istanbul Başakşehir left the field and didn't return.

The flashpoint came on the touchline 14 minutes into Tuesday's game when the fourth official – Sebastian Coltescu – described Başakşehir assistant coach Pierre Webo, as "black" or "negru" in Romanian, before he was sentf off with a red card.

An enraged Webo demanded an explanation from Coltescu, repeating at least six times: “Why you say negro?”

The exchanges were broadcast live around the world from football’s biggest club competition as television microphones in the empty Parc des Princes stadium then picked up the furious conversations.

PSG players Neymar and Kylian Mbappe also demanded an explanation from officials, while Başakşehir coach Okan Buruk said “you are racist” to Coltescu.

While players have individually walked off the pitch in protest against racism before, it was an unprecedented and striking move for both teams to abandon the game.

It was also significant that the racist attack came from an official, as footballers typically are targeted from the stands, which were empty this time around due to COVID-19 restrictions.

An hour later the incident, UEFA in a statement pledged to investigate the matter.

“UEFA will thoroughly investigate the matter and further communication will be made in due course,” it said in a statement.

While the UEFA was quick to vow action, the incident put the European football’s ruling body under pressure to show how sincere it is when it comes to fighting racism.

UEFA and FIFA have been spending millions of dollars on anti-racism campaigns, which usually feature prominent footballers with the slogan, “Say no to racism,” but both ruling bodies have been accused of doing little when it comes to taking action.

‘A marker’ in racism fighter

“The walk-off by both Başakşehir and PSG together lays down a marker in Europe," Piara Powar, executive director of Football Against Racism in Europe (FARE), told The Associated Press (AP). "Many players are fed up with half measures to tackle racism and are more prepared than ever to exercise their right to stop a match.”

It is the FARE network that helps UEFA prosecute discriminatory incidents like Tuesday night’s racist abuse at the Parc des Princes.

“Our colleagues at the Romanian state anti-discrimination organization have confirmed it is racist in Romanian to refer to a player by using his race as an identifier," Power said. “There is no ambiguity. This incident shows the need for much better training of match officials. Unintentional racism is still racism."

It is the high-profile incidents that highlight an inadequate response, like in the Portuguese league in February.

When Porto striker Moussa Marega tried to walk off the field after being the target of racist abuse from fans in a game against Guimaraes, he demanded to be substituted.

But he faced attempts by his own teammates and opposition players to prevent him from leaving the pitch. Even the referee booked Marega for refusing to continue playing – the kind of action that dissuades players from walking off.

Referees have often been criticized for not leading players off the pitch, rather than leaving them to take the decision. England decided to continue playing a men's international in Montenegro last year after Callum Hudson-Odoi and Danny Rose were targeted with monkey chants.

The same Romanian referee who took charge of the game in Paris – Ovidiu Hategan – was also in charge of the 2013 Champions League game when Manchester City player Yaya Toure complained about the lack of action against monkey noises he heard from CSKA Moscow fans.

“If officials cannot set the standards by their own behavior," Powar said, “they cannot be relied on to deal with racism on the pitch or in the stands.”

Former England defender Rio Ferdinand said football is at a "tipping point" and those in power must take a stand after the incident.

"We're at a disturbing tipping point," Ferdinand told BT Sport. "We've got Millwall, the PSG game today, all in the same week. Not a week goes by at the moment without an incident involving race,” he was quoted as saying by Reuters.

He was referring to another racist attack that took place in England’s second-tier Championship league on Saturday when some Millwall fans booed players for taking a knee in support of the Black Lives Matter movement during the match against Derby County.

"We're at the point now where something needs to be done, we're saying it all of the time, but the powers that be within this game need to make a huge stand."

"We firmly condemn any statement that could be considered racist or discriminatory," Stroe told broadcaster Digi24, according to Reuters

"The UEFA investigation will tell us what really happened and then measures will be taken. I don't think this will lead to a diplomatic scandal, we all condemn such an incident. Such unfortunate language will be sanctioned.

"I wish the language use were inoffensive or neutral, but we must not tolerate such behaviour. We will have talks about how we can repair this situation," he added.

After Başakşehir responded to the attack by tweeting "NO TO RACISM #Respect," along with a photo of UEFA's anti-racism logo, messages of support and solidarity began to pour in for the Istanbul club and Webo.

The message was retweeted by PSG, who later tweeted their support on their English-language feed.

"All forms of racism go against the values held by Paris Saint-Germain, the club's Chairman, staff and players," the French champions said.

Most of the Süper Lig clubs, including Istanbul rivals Galatasaray, Beşiktaş and Fenerbahçe, released statements on Twitter, saying they were against racism and that they stood with Başakşehir.

"Racism is never acceptable. We strongly condemn it. We will closely follow the matter. We stand by our representative Başakşehir," Turkish Football Federation (TFF) wrote.

“I strongly condemn the racist remarks targeting Başakşehir’s staff member Pierre Webo and hope UEFA will take the necessary steps. We are against all sorts of racism and discrimination in sports or elsewhere,” President Recep Tayyip Erdoğan wrote on Twitter.

Speaking at a press conference on Wednesday, Erdoğan condemned the attack again, calling it “unforgivable.”

“We stand by Başakşehir’s honorable stand against racism, a crime against humanity,” Çavuşoğlu wrote.

"Whatever the cost, it is important to take an honorable stand," Koca wrote.

“Say no to racism. Webo we are with you,” Mbappe wrote.

Former Australia striker John Aloisi was angered by the incident but praised the action taken by the players.

"It is very powerful. Let's hope it's a turning point," Aloisi said on Optus Sport's coverage, according to Reuters.

"I played with Pierre Webo – a great guy – to see him get so angry. It hurts."

The Champions League game that was abandoned in Paris will now resume on Wednesday with a new refereeing team.

PSG already secured its place in the round of 16 after Manchester United was knocked out of the tournament following a 3-2 defeat at RB Leipzig in Group H’s other match on Tuesday.

The French club could seal the group’s top spot if they win against Başakşehir, which was already eliminated last week.