Başakşehir knocked out of Europa League with Copenhagen defeat 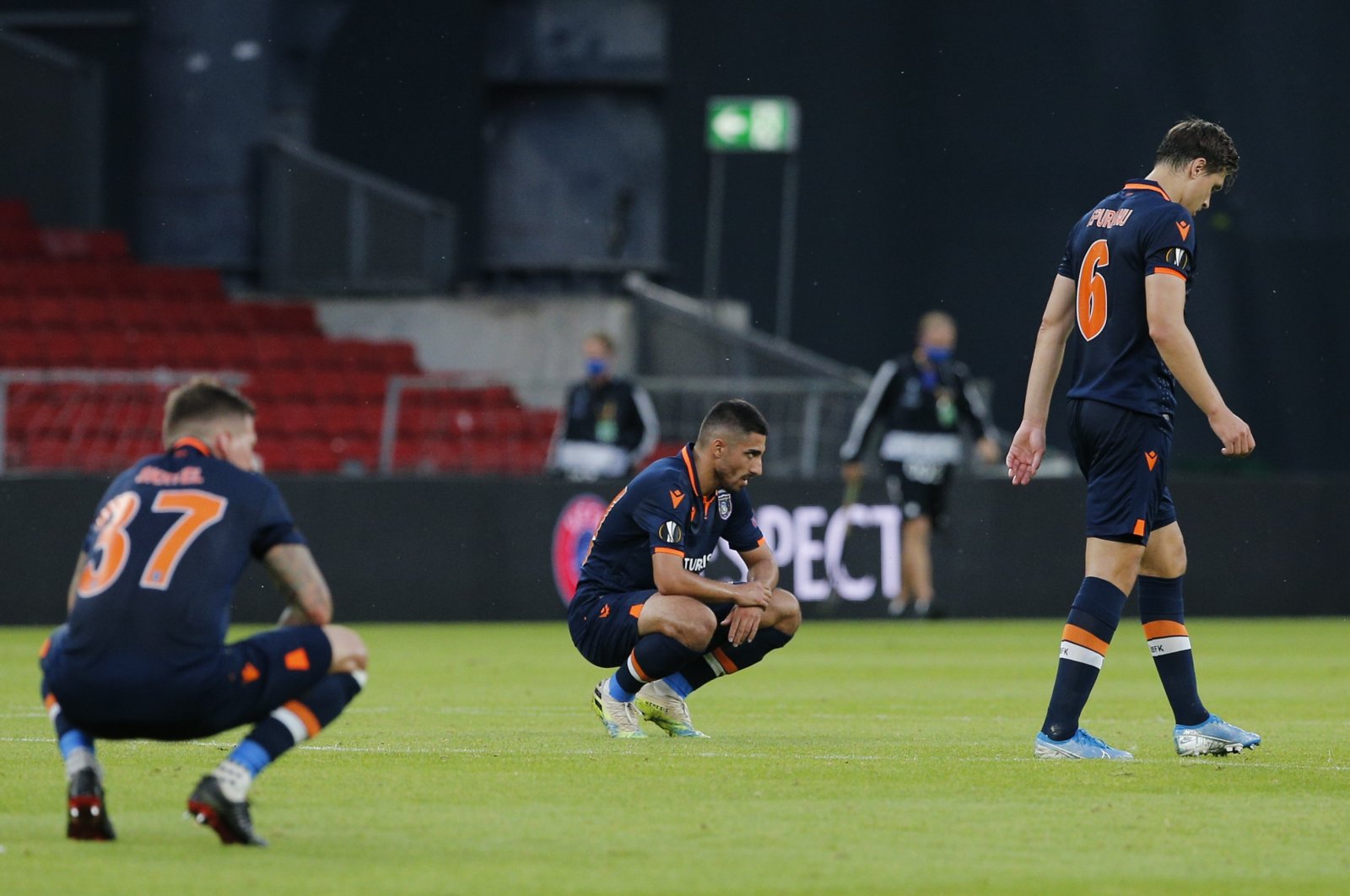 Failing to capitalize on a 1-0 victory at home before the coronavirus break, Başakşehir bid farewell to Europa League after suffering a 3-0 defeat in the second leg of last-16 match against Copenhagen

Turkish Süper Lig champions Başakşehir’s Europe campaign came to a bitter end on Wednesday as Copenhagen reached the quarterfinals after overturning a 1-0 deficit from the first leg in Istanbul to win 3-1 on aggregate.

Wind powered an unstoppable fourth-minute header past Başakşehir goalkeeper Mert Günok thanks to an inch-perfect cross by right back Guillermo Varela and then converted a 53rd-minute penalty after Mehmet Topal handled the ball in the area.

Falk put the icing on the cake for Copenhagen with a superb individual effort in the 62nd, beating Günok with a fine shot from the edge of the penalty area after a darting run through the middle.

Başakşehir managed to put on a possessive game for most of the match, but coach Okan Buruk’s men failed to turn possessions into chances, as the Istanbul side only had a single shot on goal when the final whistle blew.

After the match, Buruk said Copenhagen deserved the win, praising the Danish side for managing to play as a team and outplay his team.

"I'm sorry for the result. We couldn't play our game and I take responsibility for that," Buruk told reporters.

“If such a thing had happened in Istanbul, all hell would break loose. Even UEFA (Union of European Football Associations) would get involved,” Gümüşdağ said, adding that the club would file an official complaint with the authorities about the incident.

Despite the loss, Başakşehir’s European campaign was still a remarkable run, as it was the first time the Süper Lig champions managed to go this far in a European competition. Başakşehir was also the last Turkish team competing in European tournaments.

The match marked a similar first for Copenhagen as well, as the victory was the first time the Danish club reached the quarterfinals of a European competition.

Man U for Copenhagen

Copenhagen’s reward is a quarterfinal clash with Manchester United in Cologne on Monday after the English side beat LASK Linz 2-1 later on Wednesday to seal a 7-1 aggregate rout of the Austrian side.

United, who won Europe's second-tier club competition in 2017, appeared to be going through the motions and fell behind to a spectacular Philipp Wiesinger goal in the 55th minute before Jesse Lingard and Anthony Martial replied.

Having been virtually assured of progress after a 5-0 win at LASK in March, United manager Ole Gunnar Solskjaer fielded a below-strength side at Old Trafford, and they looked completely at sea for an hour.

Solskjaer said the fringe players needed a run out to stay in shape for United's trip to Germany, where the latter stages of the competition will be played in a mini-tournament, as his side aims to end the season on a high note.

"We learned that the players need to play to keep that sharpness," the Norwegian told BT Sport.

"Some of these lads haven't played for a while and it showed. Some haven't played since lockdown. For me, it was a good exercise. It's job done, minutes under the belt and onto Copenhagen."

In Wednesday’s other games, Shakhtar Donetsk thumped German side Wolfsburg 5-1 on aggregate after a 3-0 win in the return leg in Kyiv.

Shakhtar missed a hatful of first-half chances against Wolfsburg, with both sides reduced to 10 men in the second half after visiting goalkeeper Koen Casteels had pulled off a string of superb saves at the Olympic stadium.

The home side had defender Davit Klocholava sent off in the 66th minute for a professional foul, although the resulting penalty decision was overturned after a video assistant referee (VAR) review showed he tripped Joao Victor outside the area.

Wolfsburg defender John Anthony Brooks followed in his footsteps only four minutes later for a second bookable foul, and Shakhtar then sealed their passage with three quickfire goals in the dying minutes.

Junior Moraes broke the deadlock in the 89th minute when he turned in a Dodo cross and netted the third in stoppage time moments after substitute Manor Solomon made it 2-0 with a clinical finish.

All games from the quarterfinals onward are being played in Germany over one leg, rather than two due to a new tournament format used by the UEFA during the pandemic. The final is set for Aug. 21 in Cologne.

Romelu Lukaku and Christian Eriksen scored either side of the break for the Italians.

"It was a difficult match against a team that plays aggressively, but we did well, the defense did a good job, and I'm happy to score for the team," Lukaku told Sky Sport Italia.

"Christian also got an important goal for the side, and we must continue like this."

Inter's meeting with the La Liga side was played over just one leg in Gelsenkirchen to save time ahead of next week's last eight to be held in Germany.

The Spaniards were given a chance to take the game to penalties with 25 minutes remaining as VAR said Diego Godin had handballed in his own box, but veteran center-forward Jorge Molina missed the resulting penalty.

Eriksen made sure of Inter's last-eight spot after 84 minutes with his first touch after Dakonam Djene made a mess of a clearance inside his own area.