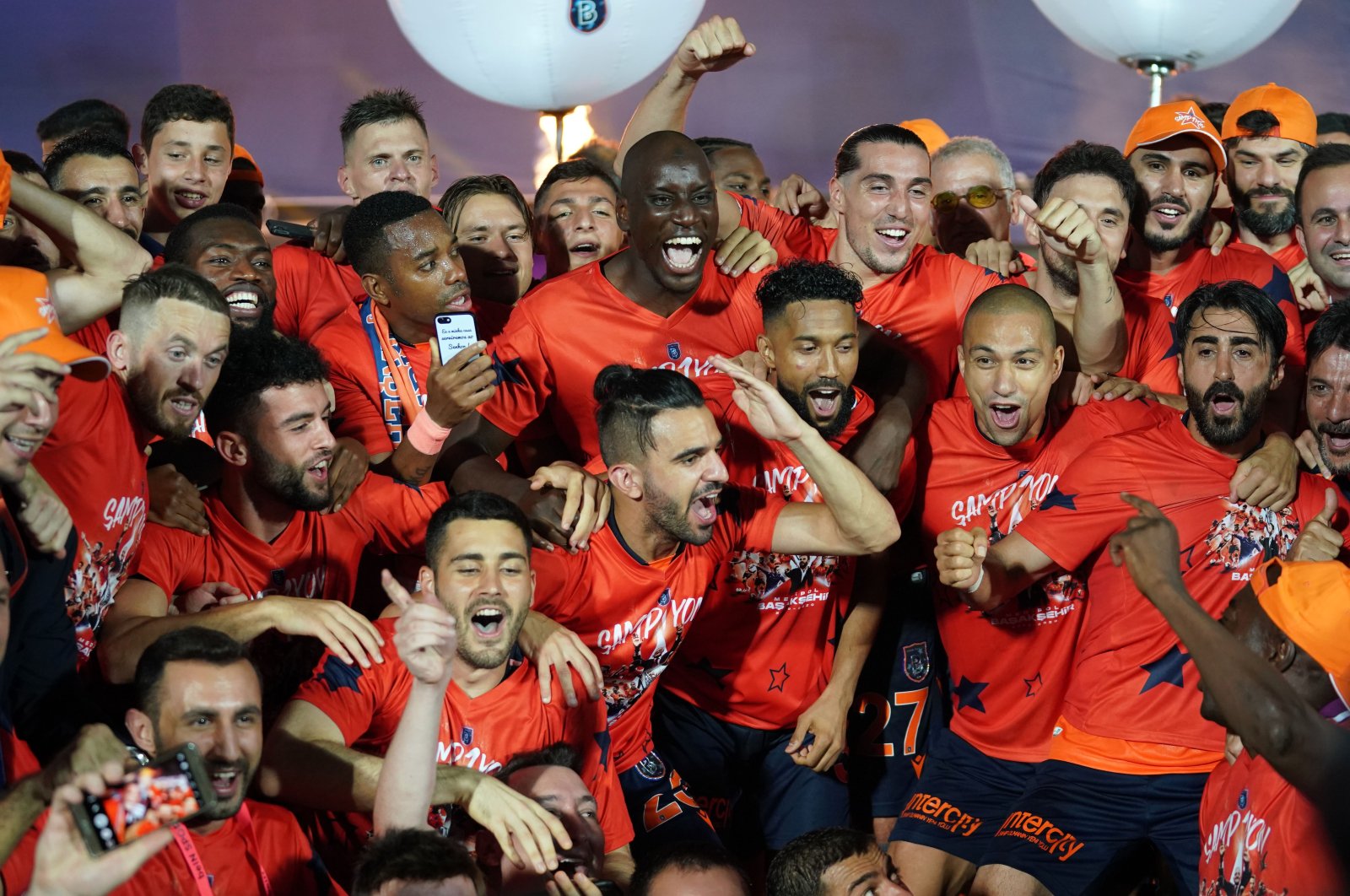 Turkish Süper Lig’s champions club welcomed a new member on Sunday as Istanbul side Başakşehir became the sixth team in the league’s history to win a title.

While Okan Buruk’s man snatched the three points they needed to secure their championship with a single goal victory over Denizlispor, the fate of the title was decided before Başakşehir’s match was finished as its closest rival Trabzonspor suffered a shocking defeat at the hands of Konyaspor.

It was a stressful night for Başakşehir. Promoted to the first division in 2014, the club had become a significant power thanks initially to the work of former coach Abdullah Avcı, who left to coach Beşiktaş last season.

Assuming the control from Avcı, Buruk had a rocky start to his tenure at the club. For the first 10 weeks of the Süper Lig, Başakşehir only had four wins and it seemed like it would be similar to past years when Başakşehir was considered a strong opponent but never a real contender for the title.

But Buruk managed to boost the form of the team, ending the first half of the season in second place. For the remainder of the season, Başakşehir never strayed too far from the top spot. Even if it briefly fell to the fourth spot, it was never more than five points away from the leader.

And Sunday put enormous pressure on the players. It was the climax of years of effort. It was their moment.

Despite having an early lead with a 19th-minute goal by its midfielder Mahmut Tekdemir, Başakşehir squandered a chance to extend its lead after Edin Visca missed a penalty. The pressure was getting to the players.

And in Başakşehir’s favor, its opponent Kayserispor was deep in the relegation zone and desperately needed three points. The visiting side came close to handing Başakşehir a last-minute upset with a brilliant shot by Pedro Henrique, only to be deflected by goalkeeper Mert Günok.

Adding to the suspense of the night, a technical malfunction caused the lights of the stadium to go out, halting the match for 17 minutes. Just as everyone thought it was fixed, the lights went out for a second time, stopping the game for another eight minutes.

But in the end, Başakşehir found out it didn’t have to do much on Sunday, as its rival Trabzonspor went on to self-destruct in a spectacular fashion, guaranteeing Başakşehir’s championship in the process.

Prior to match day, Trabzonspor both had to win and hope Başakşehir would stumble against its rivals. That was its only hope for the title. And the Black Sea club started the match with an early opener by Alexander Sorloth, who scored at the 12th minute with a classy lob over the goalkeeper.

Konyaspor, who stood dangerously close to the relegation zone prior to the match, equalized with a goal by Riad Bajic minutes before half time.

Trabzonspor made it 3-1 after Sorloth scored a penalty kick at the 56th minute and a 61th-minute goal by defender Filip Novak solidified Trabzonspor’s lead – at least that's what Trabzonspor believed, but in the last 10 minutes of the game it faced what was probably the most dramatic comeback of the season.

Konyaspor’s Levan Shengelia and Nejc Skubic equalized the game with back-to-back goals, and Thuram’s header during injury time made it 3-4, pulling the plug on any sliver of hope Trabzonspor had left.

With the amazing comeback, Konyaspor ensured its spot in Süper Lig’s next season.

While Başakşehir is known to be the Süper Lig club with the least amount of fans, it didn’t stop the handful of fans from celebrating their victory.

Not being able to attend the match due to COVID-19 restrictions, a few dozen supporters gathered outside Fatih Terim Stadium, formerly known as Atatürk Olympic Stadium, to cheer for their club while lighting flares.

Speaking to the press after the match, the club’s president, Göksel Gümüşdağ, thanked the fans for their continued support over the years.

Saying that Başakşehir managed to do what others called impossible, Gümüşdağ said he never stopped believing in the club’s potential.

“Today we are among the last 16 in Europa League. We still have a second leg to play. We are the new champions of the Süper Lig. We inaugurated our stadium on July 26, 2014, and we will lift the trophy here on Saturday on the sixth anniversary,” he said.

Also thanking the fans, coach Buruk said his men were focused on Europa League now that they won the league.

“You can’t fully realize it in the heat of the moment but winning the Süper Lig is actually a big deal. Only a handful of managers have pulled it off. I am happy. We won the league, but our Europe campaign continues. We will rest a few days and then start preparing for Europa League. I thank all the fans who have come out here tonight. Hopefully, we will represent them and Turkey in the best way in Europe,” Buruk said.

Apart from all the celebrations at the top, the Süper Lig also had its first confirmed team for relegation.

Sitting at rock bottom of the table for a long time, Ankaragücü was relegated to the second-tier PTT 1. Lig after suffering a 1-0 home defeat to Antalyaspor.

Speaking to the reporters after the match, Ankaragücü manager Ümit Şahin said the team was “indescribably” upset after losing despite putting in a good effort.

Saying that his side dominated the second half of the game, Şahin admitted his players squandered one too many chances.

Ankaragücü was previously relegated to the PTT 1. Lig in 2012 and further fell to the third-tier league the following year. It was promoted to the Süper Lig in 2018.

With only one week to go until the season ends, four teams remain potential candidates for the other two relegation spots, including Denizlispor, Kayserispor, Malatyaspor and Rizespor.