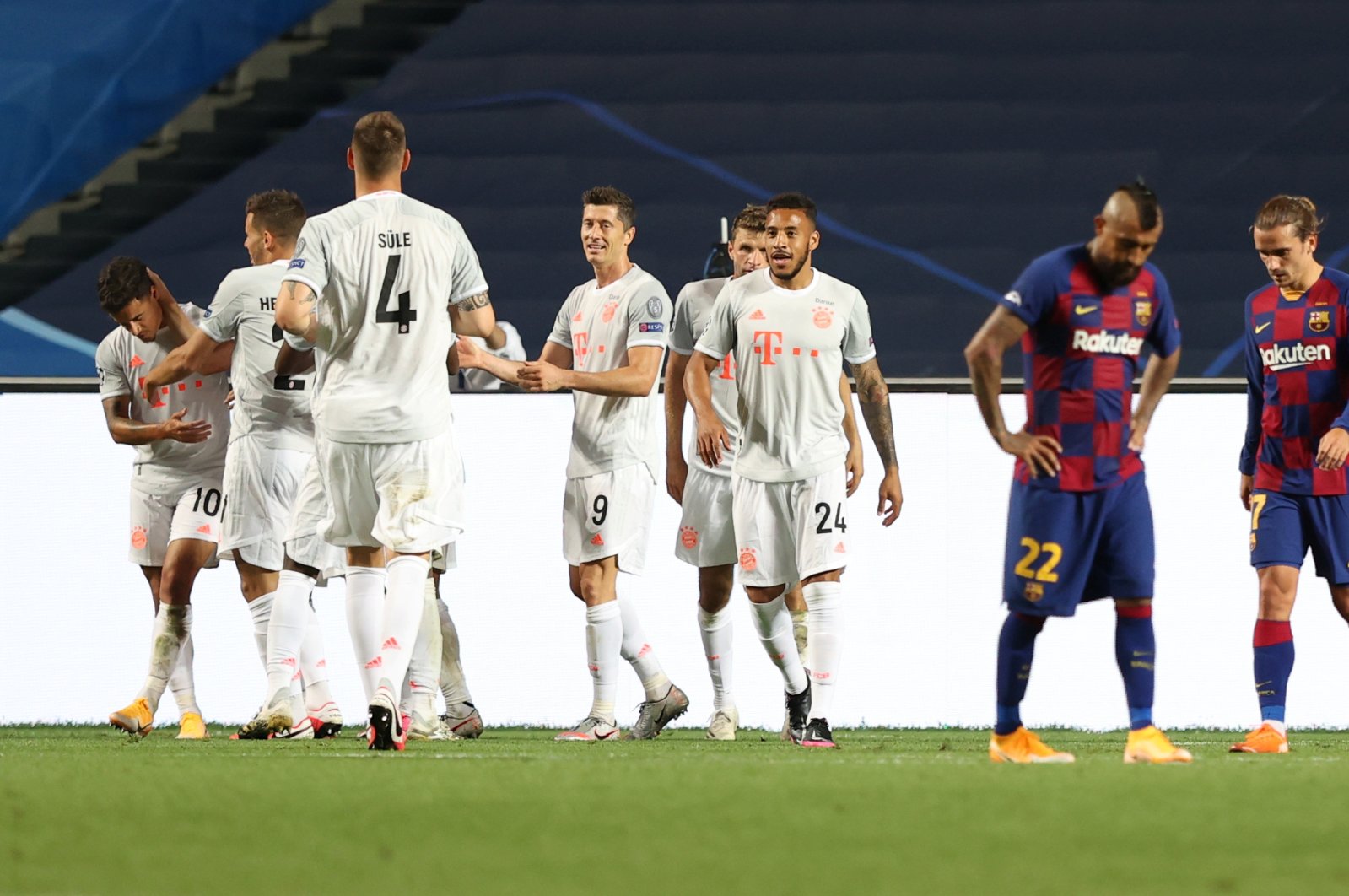 With four goals in the first half hour and four more in the last half hour, Bayern Munich humiliated Barcelona 8-2 on Friday to reach the Champions League semifinals for the second time in three years.

Thomas Muller scored twice and Ivan Perišić and Serge Gnabry added on in Bayern’s stunning start to the standout quarterfinal between the only past champions left in the last eight.

Joshua Kimmich, Robert Lewandowski and Philippe Coutinho (twice) piled on in the second half as Barcelona conceded eight for the first time since 1946.

Barcelona got on the board with an own-goal by David Alaba in the first half and a goal by Luis Suárez in the second among only seven shots on target.

Seeking its first title since 2013, Bayern will next face either Manchester City or Lyon, who meet on Saturday in the last quarterfinal.

Paris Saint-Germain and Leipzig will play in the other semifinal of the mini-tournament being staged without fans in Lisbon amid the coronavirus pandemic.

The humiliating loss ended a disappointing season for Barcelona, one that included a coaching change and public disputes between players and team officials. It is the first time since 2008 that the Spanish club finished a season without a significant title. It hasn’t lifted the European trophy since 2015.

The commanding victory kept alive Bayern’s quest for a sixth title, which would move it ahead of Barcelona. It will be back in the semifinals for the first time since 2018 when it lost to Real Madrid in the last four. The German champion was eliminated by Liverpool in the round of 16 last season.

It is the first time since 2007 that no Spanish club has made it to the semifinals.

The result adds pressure on coach Quique Setien, who had already been criticized after Barcelona relinquished the Spanish league lead – and title – to Real Madrid after the competition resumed following the pandemic break.

Barcelona, which was eliminated by Liverpool in last year’s semifinals, hasn’t reached the final since the title run in 2015. It got past Bayern in the last four that year. The German club has the most wins against Barcelona in the European tournament.

In a hectic start at Benfica’s Stadium of Light, Barcelona paid for defensive mistakes against Bayern’s potent attack, which reached 39 goals in nine games in this Champions League.

Just four minutes in, Muller scored from inside the area after a breakaway that started when Barcelona midfielder Sergio Busquets gave the ball away at midfield.

Barcelona equalized three minutes later when Alaba found his own net while trying to intercept a pass by Jordi Alba to Suárez.

Barcelona had a couple of great chances shortly after, with Suárez’s close-range strike being saved by Manuel Neuer and Messi’s curling cross shot hitting the far post.

Messi also missed after a run into the area, and Bayern went back in front with Perišić’s powerful shot past goalkeeper Marc-Andre ter Stegen.

Bayern added the third and fourth goals three minutes apart after Gnabry beat Gerard Piqué to a pass into the area, and Muller completed a cross into the area after Barcelona right back Nelson Semedo conceded possession.

Suárez pulled Barcelona closer in the 57th, but Kimmich added the fifth goal after Alphonso Davies cruised past the Barcelona defense.

Lewandowski scored with a header in the 82nd, and Coutinho – a former Barcelona player who struggled at the Catalan club – closed the scoring with goals in the 85th and 89th minutes.

With his double, Muller reached six goals in five matches against Barcelona on the occasion of becoming the German player with the most appearances in the Champions League at 113.

Bayern also had a 53rd-minute goal disallowed for offside.