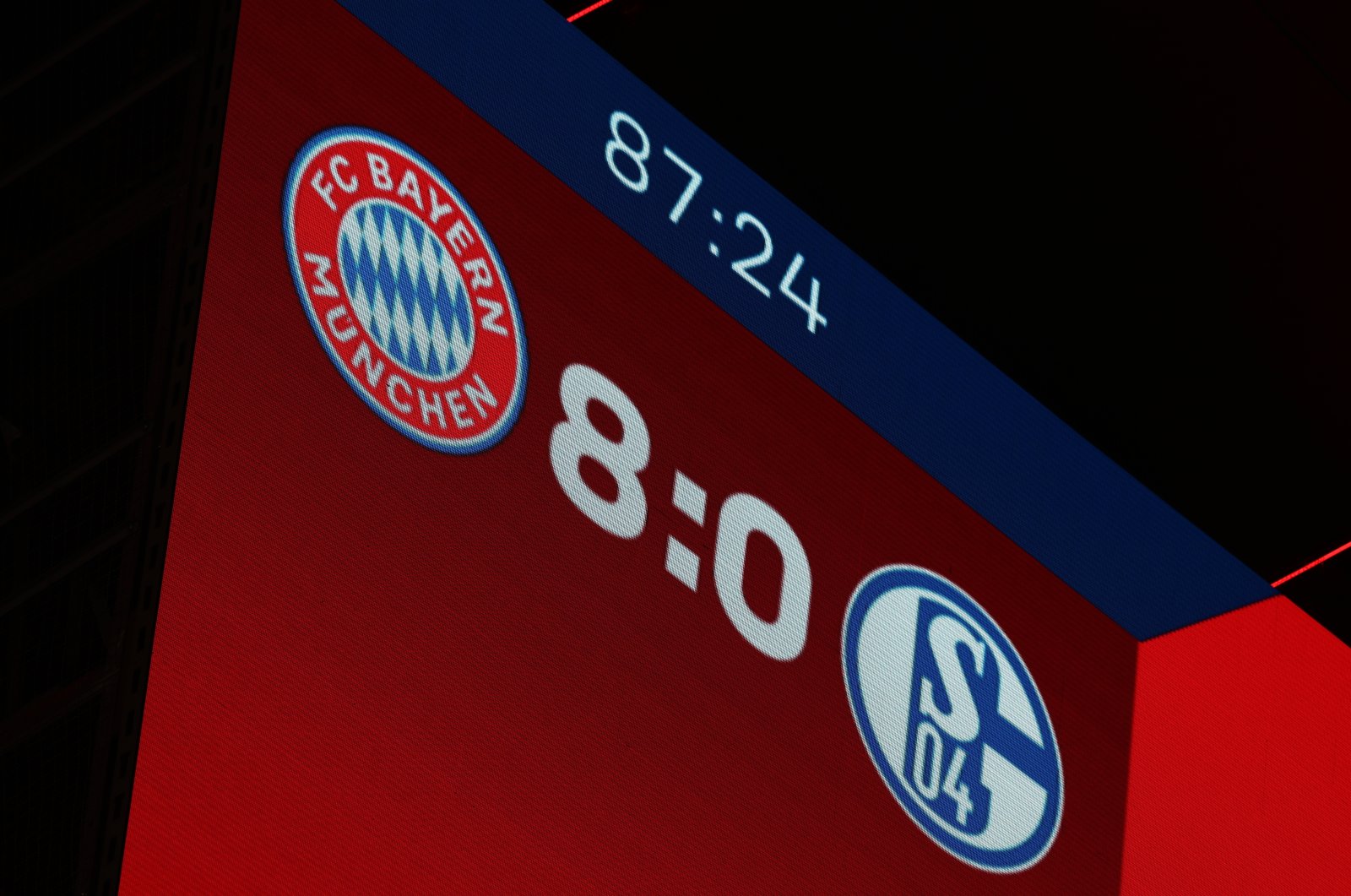 A general view of the scoreboard during the Bundesliga match between Bayern Munich and Schalke, in Munich, Germany, Sept. 18, 2020. (AP Photo)
by Agencies Sep 22, 2020 10:10 am
RECOMMENDED

On the day the FIFA president warned about a lack of competition in club football, Bayern Munich started the German league by scoring a whopping eight goals.

The Bavarian club routed Schalke 8-0 Friday and it could have been more but for a slew of missed chances. After half an hour, Bayern was up 3-0. By then, it was only a matter of how many more the team would score.

“The Bundesliga did not provide many arguments at the start that it should definitely continue to be watched – at least not when Bayern Munich is playing,” Berlin newspaper Der Tagesspiegel wrote. “The game was tediously boring.”

Bayern has already won the last eight Bundesliga titles – a record – and last season added the Champions League and German Cup, too.

“Do we really think the Italian league has been very exciting in the last 10 years, let’s say nine years?” Infantino asked after the FIFA Congress. “Do we really think that some other leagues have been really exciting in the last years? What kind of competition is that, where 90% of the teams want to arrive second, and not first? I don’t know. I’m asking myself that question.”

Under coach Hansi Flick, who took over in November, Bayern has evolved into a relentless pressing machine, choking off opponents’ space and options, then bamboozling them with quick combination attacks.

The win over Schalke was Bayern’s 22nd in a row in all competitions, and the second in four games in which the team scored eight goals after the 8-2 rout of Barcelona in the Champions League.

Germany forward Leroy Sane joined in the offseason, strengthening an already fearsome offense with the likes of Robert Lewandowski, Thomas Muller and Serge Gnabry. Sane and Gnabry seemed to form an instant understanding. Sane scored one goal and set up two more for Gnabry, who scored a hat trick.

“We were getting hammered by Bayern before it was cool,” former Bundesliga club Hamburger SV joked on Twitter.

Bayern could have met stronger opposition than the hapless Schalke, now on a 17-game run without a win, but it is hard to see if any other club could challenge Flick’s team.

“It’s currently probably the best team in the world, you have to say it,” Borussia Dortmund sporting director Michael Zorc said of Bayern after his own team’s 3-0 win over Borussia Monchengladbach Saturday. “An example for all the others.”

Leipzig, which finished third behind Bayern and Dortmund last season, eased past Mainz 3-1 Sunday, but few believe it has what it takes to dethrone the champions. And it is a stretch to see any other contenders.

Bayern looks set to claim a record-extending ninth consecutive title, then a 10th, forcing fans to look to the Bundesliga’s relegation battles for excitement.

Bundesliga chief executive Christian Seifert warned in 2017 that it would become a problem “if Bayern Munich wins the title 10 or 15 times in a row.”

But it seems there is no way of stopping the Bavarian behemoth.