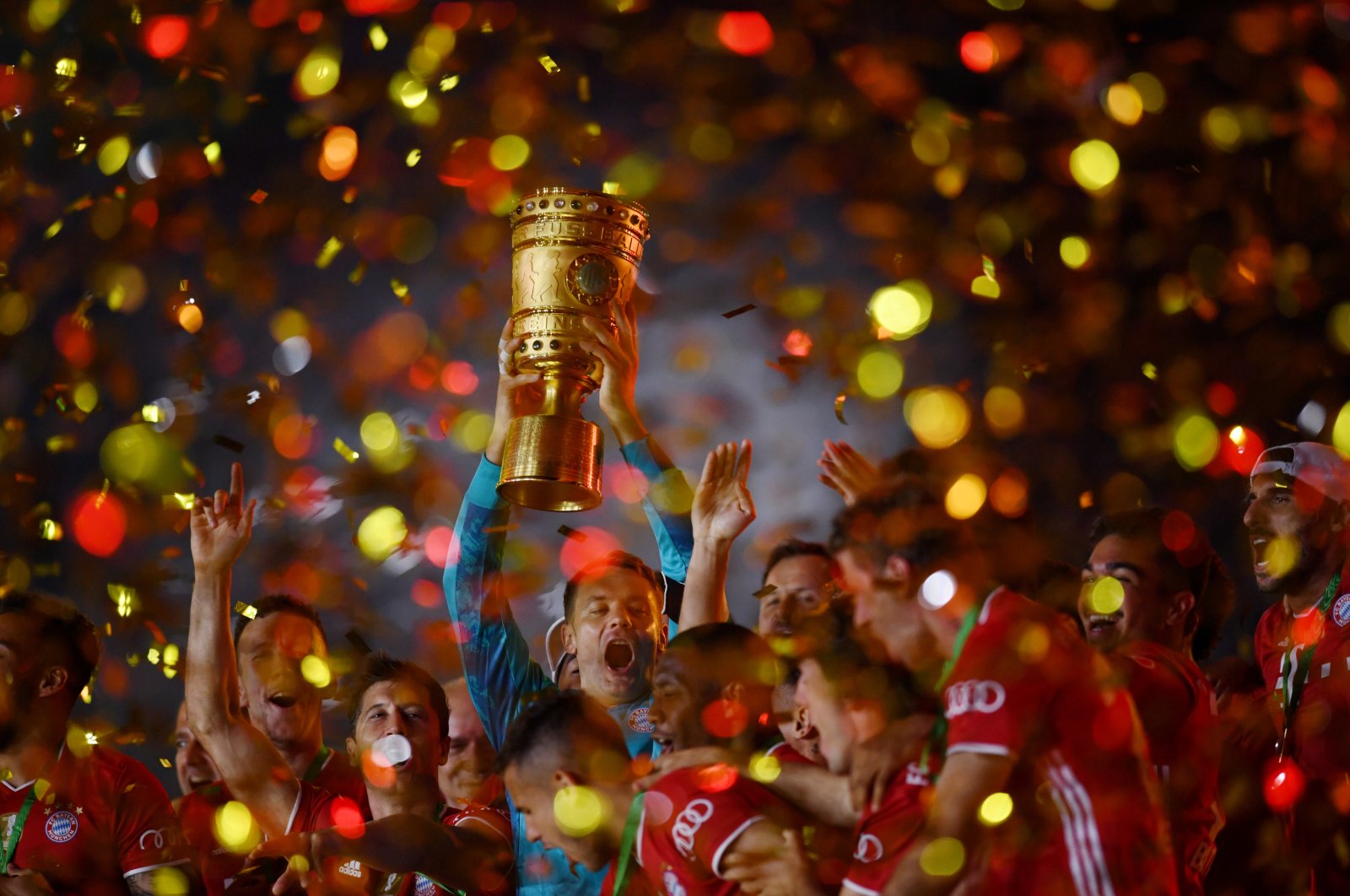 The team showed its domestic dominance by beating Bayer Leverkusen 4-2 in the country’s first cup final held without supporters present due to the ongoing coronavirus pandemic.

"(It’s) a bit sad when the fans are missing for such a cup final in such a great stadium,” Bayern forward Thomas Müller said. "I was thinking about it during the award ceremony. It hurts a bit.”

Bayern, which had already won its eighth straight Bundesliga title, retained the cup with goals from David Alaba, Serge Gnabry and two from Robert Lewandowski as he passed the 50-goal mark for this season.

It was Bayern’s second straight league and cup double and its 13th overall. Now, Bayern is targeting the reorganized Champions League in August as it bids to repeat the treble-winning season under Jupp Heynckes in 2013.

Leverkusen had been chasing its first title of any sort since 1993 when it last won the cup. Since then it has finished runner-up on nine occasions in different competitions, triggering taunts of "Vicekusen” from rivals.

Supporters were excluded from Berlin’s 75,000-capacity Olympiastadion. Only 691 people were allowed in, including Germany coach Joachim Löw who watched while wearing a black face mask and smart suit.

Hygiene measures were strict. Normally noisy roads would be teeming with traffic and fans ahead of the German soccer showpiece, but the area was eerily quiet before kickoff.

Fast food vendor Sven Grosch was the only one who opened his kiosk to sell sausages, beer and fries. He waited wearily with his arms folded behind his counter as only a trickle of curious onlookers passed by.

"It’s just sad without fans,” Grosch told The Associated Press. He said he had received state help to help him overcome the financial hit from the pandemic, "but it’s not sustainable. I hope supporters are allowed back at games sooner rather than later.”

German soccer officials are in talks about allowing a limited number of supporters to games with strict social distancing measures when the new season begins in September, but nobody can say when stadiums will be filled to capacity as before.

Germany has confirmed almost 200,000 cases of COVID-19 but has kept its death toll relatively low at just over 9,000. The Bundesliga was the first European league to resume from suspensions caused by the pandemic.

"I am so incredibly sorry that you didn’t have any spectators today. It’s something I sorely miss and you do too,” German soccer federation president Fritz Keller said during Bayern’s trophy presentation. "That we’re standing here at all is down to a lot of busy people.”

Bayern dominated from the start and could have been leading by more than two goals at the break.

Alaba broke the deadlock with a brilliant free-kick inside the top right corner in the 16th minute and Leverkusen was grateful to goalkeeper Lukas Hradecky for blocking Thomas Müller from close range shortly afterward.

Bayern maintained its pressure and Gnabry fired in the second goal in the 24th.

Leverkusen looked short of ideas and uncertain. Peter Bosz reacted with two changes at the break, but little seemed to change.

Substitute Kevin Volland should have scored for Leverkusen in the 57th, but he missed the ball while attempting to shoot, two minutes before Hradecky allowed Lewandowski’s shot to slip through at the other end.

Leverkusen midfielder Sven Bender pulled a goal back in the 64th, prompting a wild phase in which Leverkusen missed more chances.

But Lewandowski killed off any slim hopes of a comeback with his second goal in the 89th. It was his 51st goal across all competitions this season.

Leverkusen star Kai Havertz scored a penalty with the last touch of the game. He didn’t celebrate.