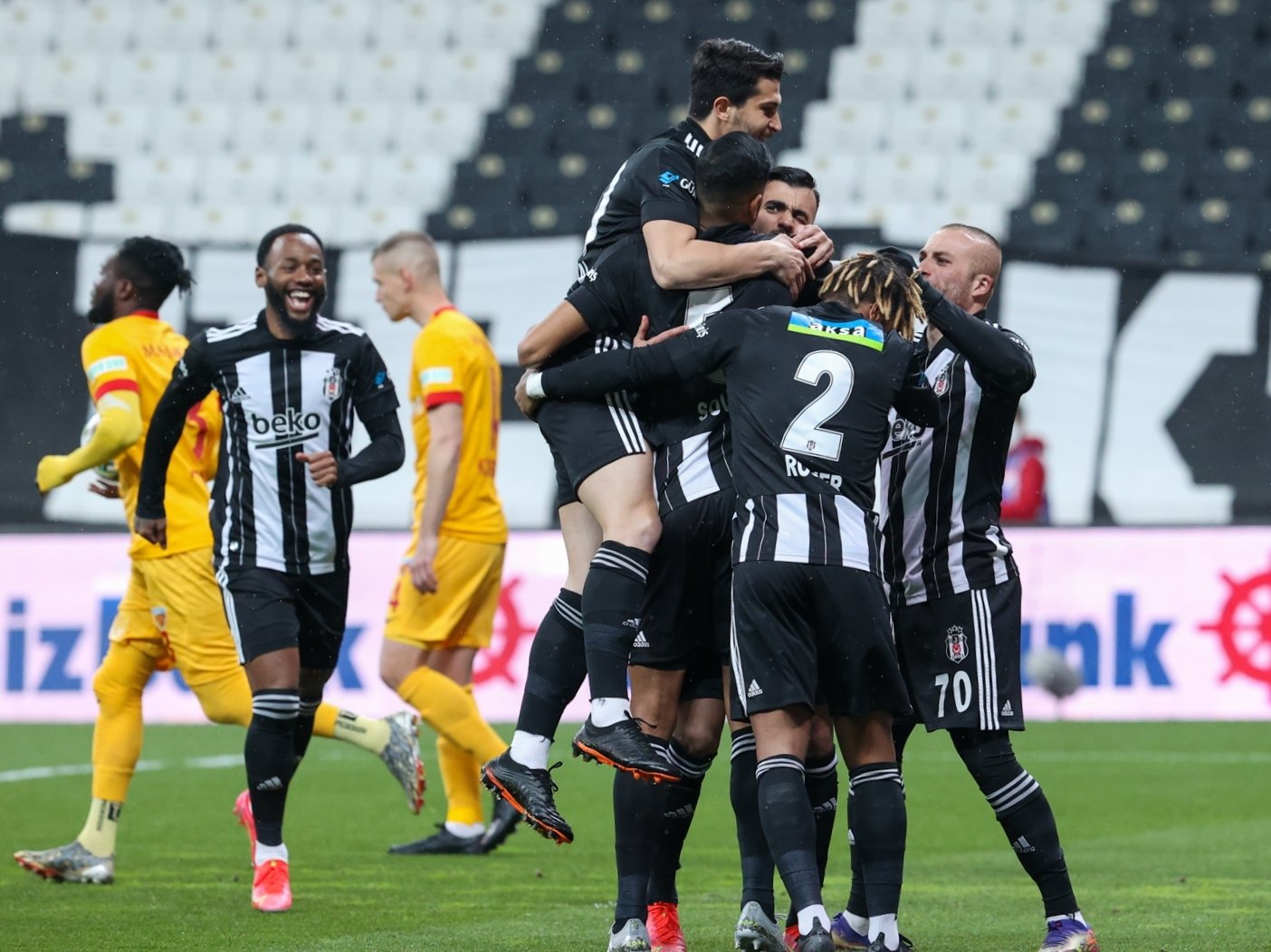 Beşiktaş players celebrate a goal during a Süper Lig match against Kayserispor at the Vodafone Park stadium in Istanbul, Turkey, April 24, 2021. (AA Photo)
by Arda Alan Işık Apr 26, 2021 11:49 am
RECOMMENDED

The status-quo in the Süper Lig title race was kept pretty much the same in one of the most crucial weeks of the season.

It was a week when a potential point loss was a serious possibility, and Beşiktaş fans, once again, watched the game on the edge of their seats.

However, unlike well-organized Sivasspor last week, Kayserispor players could not pose a serious threat for Beşiktaş, even though they managed to convert their only shot on target to a goal.

Beşiktaş took control of the game early on and did not give Kayserispor any leeway till the end.

Kevin N’Koudou was the star of the game with two goals in a 3-1 victory. He successfully carried his team to the win, in the absence of several key players in both offense and defense. Normally a substitute in coach Sergen Yalçın’s gameplan, he showed that with the right strategy, he could also be beneficial to the starting 11.

The right strategy for this game was to play like Fenerbahçe did in the last three weeks – without a striker and lots of midfielders joining the attacks.

Just like their last tie in November, Beşiktaş easily brought at least four-five players around Kayserispor’s penalty box numerous times. Gökhan Töre in the striker role was only a trap for Kayserispor, as the rest of the team used the chaos sowed by Töre to sneak behind the defense line.

Considering the fact that Beşiktaş will be without some of the players it lost over the last couple of weeks until the end of the season, it would be wise for Yalçın to improve the game he played against Kayserispor.

Besides that, Francisco Montero’s long balls toward N’Koudou were the other important element in Beşiktaş’s attacks. Yalçın might decide to keep him in the starting line-up instead of Welinton.

Fenerbahçe, on the other hand, showed a dominant performance against Kasımpaşa by scoring three goals in the first half. Despite goalkeeper Harun Tekin’s obvious mistakes and the stress later in the game, Fenerbahçe was the clear winner. Had it been more precise with finishing, the result could have been more dramatic than 3-2.

Coach Emre Belözoğlu’s 4-6-0 formation seems to work the best for Yellow Canaries and I think Ener Valencia should have been given the duty of a hidden striker a long time ago. With the midfield line comprising of Jose Sosa, Ozan Tufan, Mert Hakan Yandaş, Dimitrios Pelkas and Irfan Can Kahveci, Fenerbahçe has probably the most talented midfield line in the league.

Of course, there are no repeated patterns or certain passing schemes other than Caner Erkin’s crosses, but even the fact that this midfield creates more time and space for each other makes a huge difference. I expect Fenerbahçe to stick to this game plan and push the race to the very last week of the league.