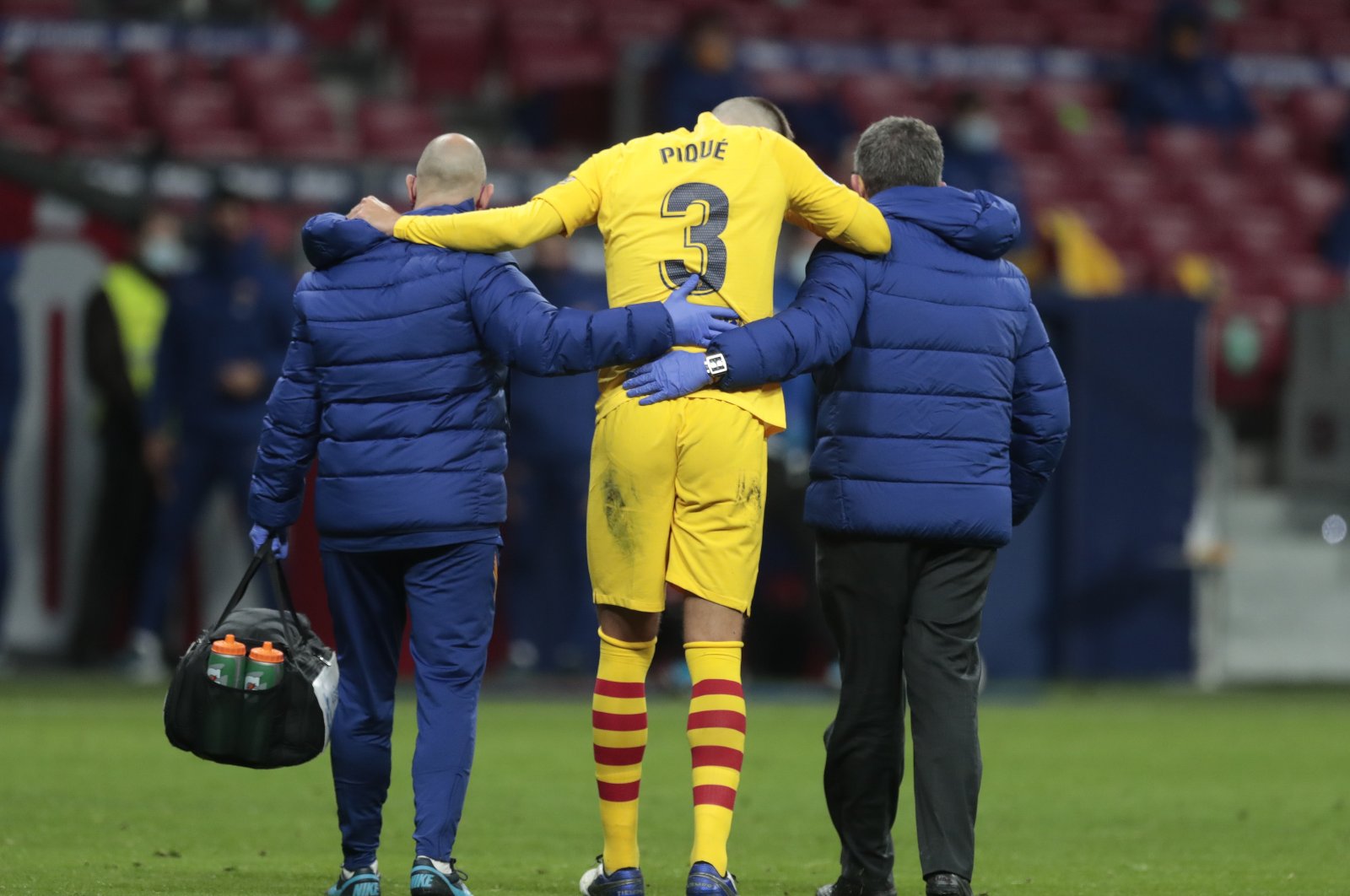 Barcelona's Gerard Pique has sustained a serious knee injury, the club confirmed Sunday, with the defender expected to be out for at least two months.

Pique cried as he hobbled off the pitch during Barca's 1-0 defeat by Atletico Madrid in La Liga on Saturday following a collision with Angel Correa.

"Tests have shown that he has a grade 3 sprain in the internal lateral ligament and partial injury to the anterior cruciate ligament in his right knee," said Barcelona in a statement.

The club also confirmed that Sergi Roberto, who can play right-back or central midfield, will be out for two months after tearing a thigh muscle.

There was no official estimate for Pique's return but reports in the Spanish press have suggested he could be out for anything between two and six months. Pique's absence leaves Barca with Clement Lenglet as its one fit central defender, given Samuel Umtiti and Ronald Araujo are also out injured. Frenkie de Jong has occasionally dropped into defense in recent weeks but the situation is far from ideal for Ronald Koeman, whose side slipped to its third league loss of the season against Atletico.

Barca sits 10th in La Liga but has fared better in the Champions League, sitting top of Group G with nine points out of nine ahead of Tuesday's game away at Dynamo Kyiv.

Atletico Madrid delivered a major boost to its hopes of winning La Liga on Saturday by beating Barcelona 1-0 and consigning its opponents to its worst start to a league season in 29 years.

Yannick Carrasco finished brilliantly from range after mistakes from Gerard Pique and Marc-Andre ter Stegen left the goal gaping but Barca, and a below-par Lionel Messi, failed to respond at the Wanda Metropolitano. Instead, Atletico recorded their first league victory over Barcelona in 10 years, which puts them three points ahead of Real Madrid, with a game in hand, and second in the table, level on points with early leaders Real Sociedad. It also leaves their opponents languishing in 10th, with Barcelona's 11 points from their first eight games their worst tally at this stage since the 1991-92 season.

"Like any coach, I am responsible," said coach Ronald Koeman. "We know we have to improve the results. I continue to trust the players I have."

Real Madrid had earlier been held to a 1-1 draw by in-form Villarreal, another slip-up for the reigning champions to enforce the sense that this could be Atletico's year. And beating Barcelona in La Liga for the first time since 2010, before Simeone arrived as coach, will do wonders for the team's belief and extends what is now a considerable advantage in the table. It also extends Atletico's unbeaten run in the league to 24 matches.

"Today we were able to win but it absolutely doesn't change anything," said Simeone. "We're working well and I'm excited about this team." Antoine Griezmann almost put Barca in front against his old club while Marcos Llorente went closest for Atletico, skimming the crossbar after a neat exchange between Kieran Trippier and Correa down the right.

Messi might have scored but was uncharacteristically hesitant, with an even half about to finish goalless until two errors gifted Atletico the lead. Pique was caught out of position after a heavy touch and Mario Hermoso did well to free Carrasco. Ter Stegen, already upfield, rushed out to fill the gap Pique had left but Carrasco's first touch feathered the ball through the goalkeeper's legs before a curling finish from 50 yards sent the ball into the open net.

Clement Lenglet should have equalized but headed Messi's cross straight at Jan Oblak yet Barcelona was far from dominant and Messi struggled for his usual influence.

Philippe Coutinho came on and Pique hobbled off. Messi floated a free-kick wide and saw a shot blocked before substitute Martin Braithwaite was given a late chance after a poor kick by Oblak. But Barca was unable to find a way through.