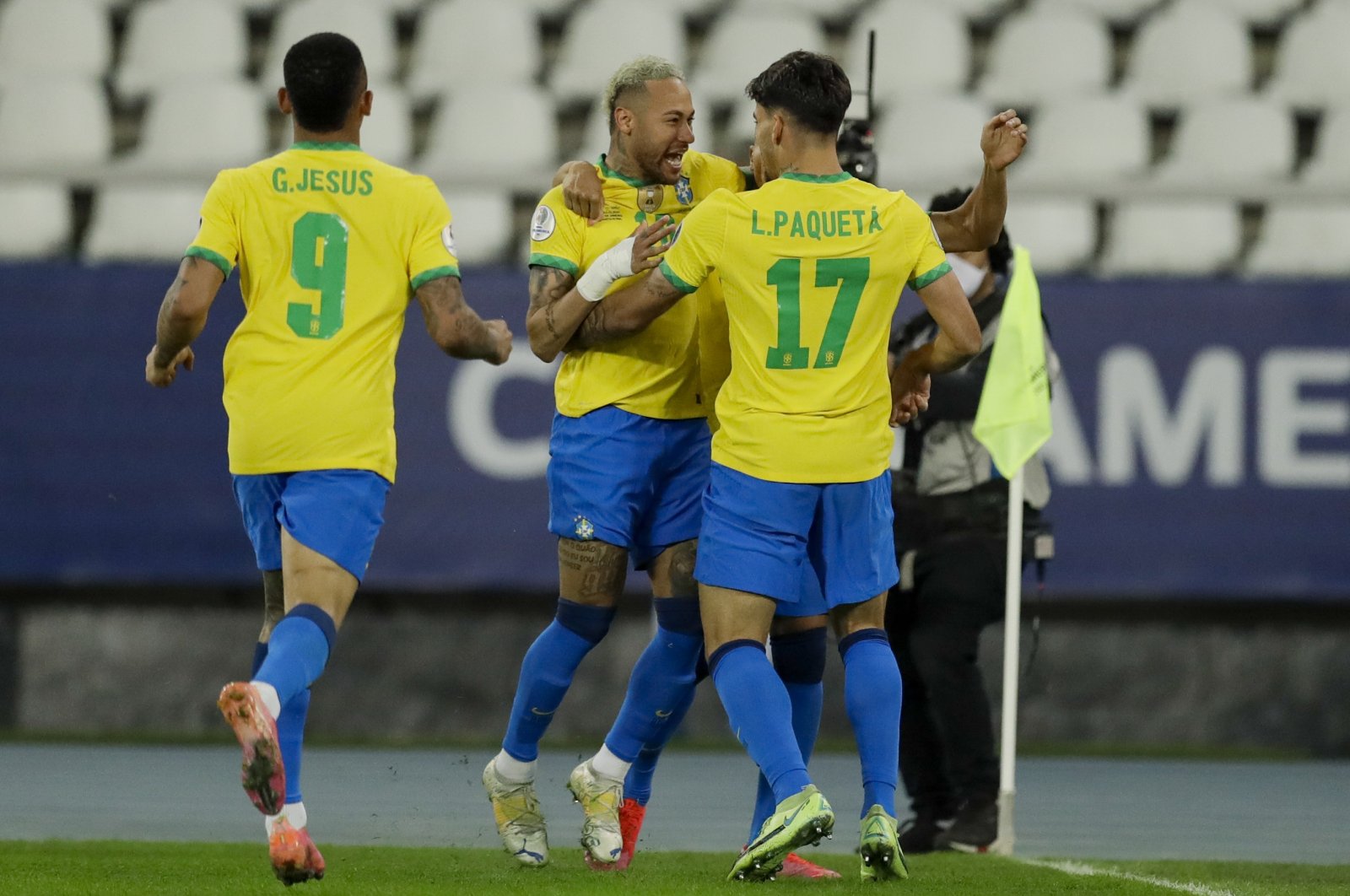 Brazil's Lucas Paqueta celebrates with teammate Neymar after scoring the only goal during a Copa America quarterfinal football match against Chile at the Nilton Santos stadium in Rio de Janeiro, Brazil, July 2, 2021. (AP Photo)
by Agencies Jul 03, 2021 10:00 am
RECOMMENDED

Brazil and Peru on Friday advanced to the Copa America 2021 semifinals, where they will play each other Monday.

Defending Copa America champion Brazil defended strongly with 10 men to beat Chile 1-0. Substitute Lucas Paquetá scored the only goal of the match only seconds before Gabriel Jesus was sent off early in the second half.

Paquetá's winner to the left corner of Chilean goalkeeper Claudio Bravo in the 46th minute gave Brazil fans some hope that the Selecao would ease into the next stage. But only two minutes later Jesus was sent off after hitting Chile's Eugenio Mena with a flying kick.

Neymar and Brazil coach Tite said after the match that Jesus didn't see Mena and accidentally kicked him as he tried to recover possession in the midfield.

Brazil worked so hard defensively that Chile had fewer shots on goal after Jesus was sent off than during the time he played; two against three.

Paquetá came onto the pitch after a tense first half with few opportunities for both sides. He replaced Roberto Firmino.

Brazil didn't stop threatening Chile with Neymar's dribbles and quick counter-attacks. But Chile was much closer to the equalizer; it had an Eduardo Vargas goal disallowed for offside and English-Chilean Ben Brereton hit the bar with a header in the 68th minute.

Meanwhile, Peru advanced to the semifinal after beating Paraguay on penalties 4-3 following a 3-3 score in regular time, in the most thrilling Copa America match yet.

Miguel Trauco scored the decisive penalty for Peru in a shoot-out that echoed the drama match with two shots over the crossbar and three saves.

Peruvian keeper Pedro Gallese set the stage for Trauco with his diving save of Alberto Espinola's attempt.

Paraguay captain Gustavo Gomez had opened the scoring in the 11th minute, but Gianluca Lapadula scored in the 21st and 40th to give Peru the lead.

Paraguay's prospects looked bleak when Gomez was sent off moments before halftime, but Junior Alonso pulled his team level in the 54th minute.

Yoshimar Yotun's 80th-minute strike put Peru up 3-2, but after Andre Carillo was sent off in the 84th to reduce the Peruvians to 10 men Gabriel Avalos grabbed a last-minute equalizer to force the penalty shoot-out.