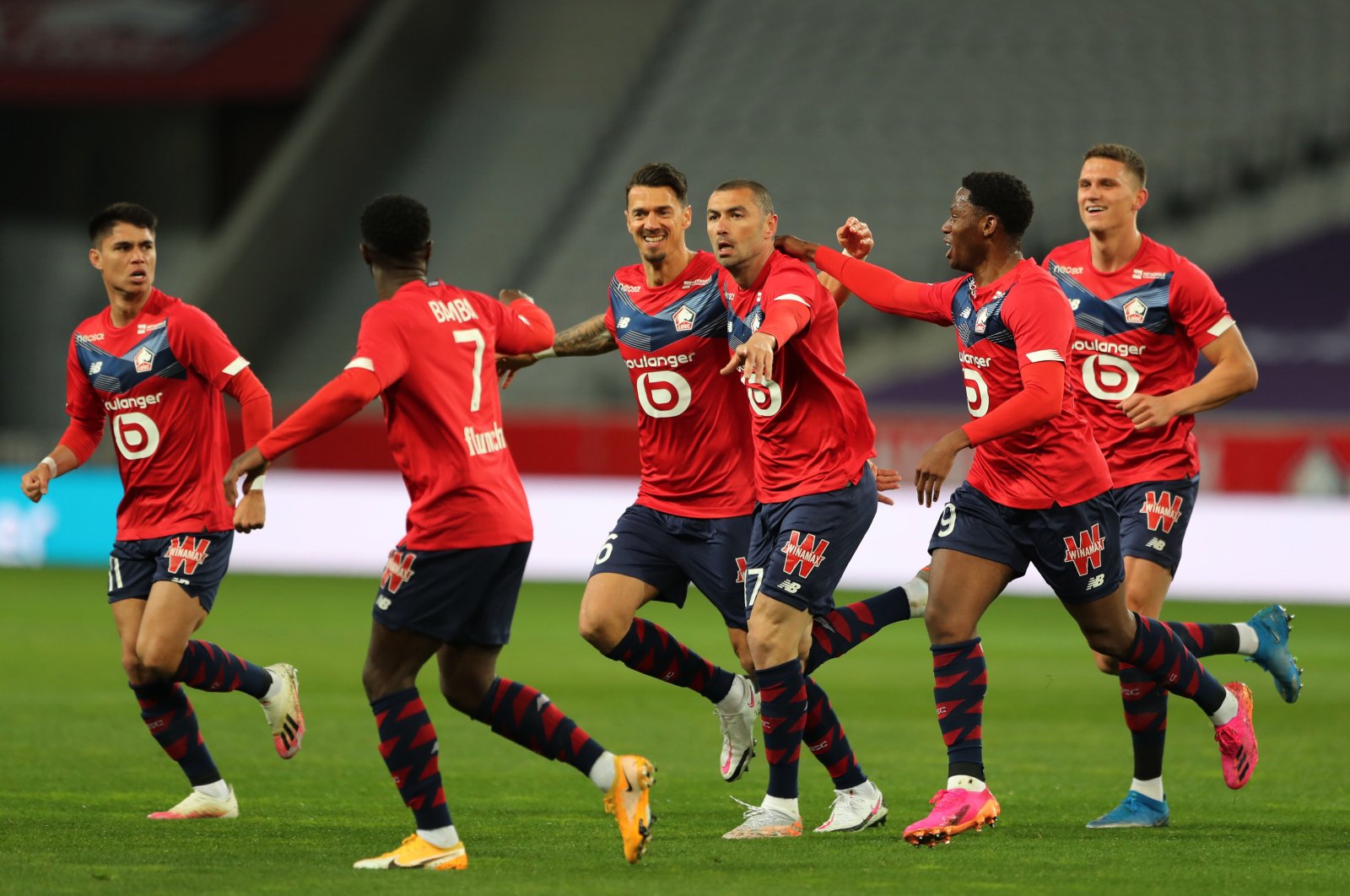 Lille's Turkish duo Burak Yılmaz and Zeki Çelik were on target to keep their team on course to win the French Ligue 1 title with a 2-0 win over Nice on Saturday.

Yılmaz once again starred for Lille, who is a point clear of defending champions Paris Saint-Germain at the top of the table with three games left.

Yılmaz and fellow Turkish international Çelik scored two screamers for Lille against a Nice team who played most of the second half a man short after defender Jordan Lotomba was sent off.

Veteran striker Yilmaz, 35, had been the inspiration with a brace as Lille came from 2-0 down to win 3-2 at Lyon last weekend and he was also the catalyst here as Christophe Galtier's side responded perfectly after PSG had beaten Lens 2-1 earlier to move provisionally to the summit.

Yılmaz scored with a pinpoint low strike into the far corner from 20 meters following a Jonathan David lay-off on 13 minutes, and he also struck the post in the second half.

After Lotomba was shown a second yellow card for a foul on Jonathan Bamba at the start of the second half, Çelik volleyed in Lille's second goal in the 56th minute as he latched onto a clearance and volleyed in from just outside the box.

If Lille wins its final three games against Lens, Saint-Etienne and Angers, it will be champions for the first time since 2011.

"It was important to win at home because we hadn't won here for a while, and the battles go on. We have three difficult games left and we just need to keep fighting."

PSG is lying in wait for a slip-up, while third-placed Monaco – the best team in Ligue 1 in 2021 – will move back to within two points of the top spot if they can beat Lyon later Sunday.

Neymar scored one goal and set up the other for Marquinhos as PSG edged Lens at home to claim a vital three points in between the two legs of their Champions League semifinal against Manchester City.

Coach Mauricio Pochettino made six changes to his team from the first leg which PSG lost 2-1 against Pep Guardiola's side, with Kylian Mbappe watching from the stands because of a slight calf injury.

However, Pochettino said he was confident Mbappe would be fit for the game in Manchester on Tuesday.

"I am always optimistic and I still am," Pochettino told Canal+.

"We think he will be there but we will make a decision before the game."

Angel Di Maria was also rested but Neymar started and pounced when Argentine defender Facundo Medina gave the ball away under pressure to run through and score PSG's opener in the 33rd minute, his seventh league goal of the campaign.

Marquinhos then headed in a Neymar corner to make it 2-0 just before the hour mark, with Ignatius Ganago getting a goal back for Lens shortly after.

Lens, who saw a 13-game unbeaten run ended, remain fifth, just ahead of Marseille in the fight for France's last European qualifying berth.

They gave the reigning champions a run for their money and the tension got to PSG sporting director Leonardo, who was caught on camera angrily remonstrating with the officials in the tunnel at the end of the game – his mask under his chin – apparently over what he felt was some rough treatment for Neymar.

"We deserved the victory even if it wasn't a brilliant performance," admitted Pochettino, before turning his thoughts to City.

"Every game is different, and so is every competition. We needed the three points today to stay in contention to win the league, and on Tuesday we will need to score two goals to win against City."