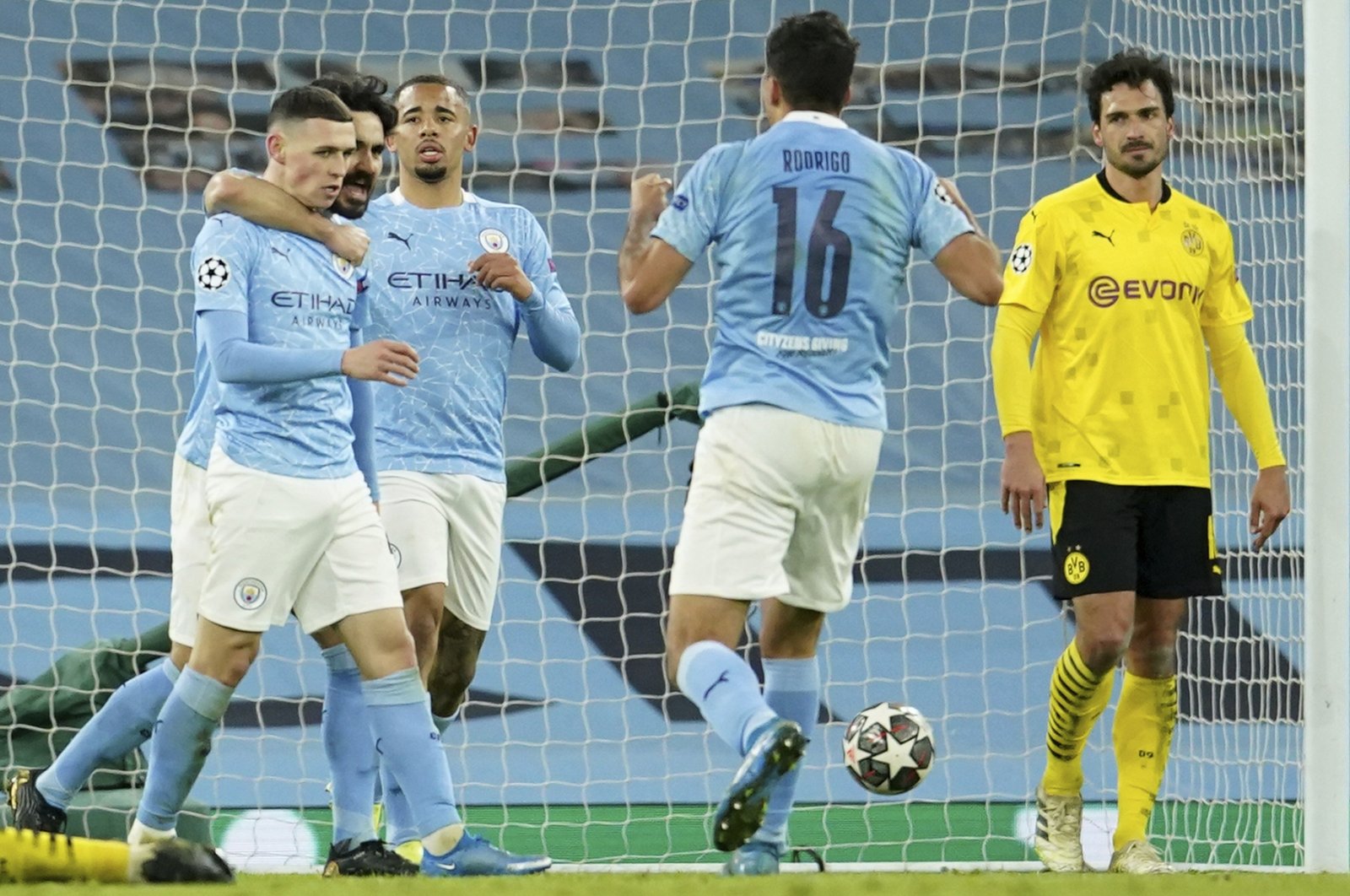 Manchester City snatched a late win over Borussia Dortmund, while Liverpool was outclassed by Real Madrid in the Champions League quarterfinals Tuesday.

In Manchester, Phil Foden capped a fine Champions League display for City with a 90th-minute goal to secure a 2-1 win over Dortmund.

Ilkay Gündoğan brought down a cross at the far post and laid the ball off for Foden to sweep into the net, after Marco Reus had equalized for the visitors in the 84th minute.

Kevin De Bruyne, pulling the strings in midfield for City throughout the game, scored the opening goal in the 19th minute after a flowing move and also sent in the cross that led to the winner.

Jude Bellingham thought he had equalized for Dortmund in the 37th but the goal was harshly disallowed for a foul on City goalkeeper Ederson, even though there appeared to be little contact.

However, Dortmund did level when Marco Reus, Dortmund’s longest-serving member and captain, scored his first Champions League goal since October 2018. It wasn’t enough for the win but could prove to be a valuable away goal to take back to Germany for next Wednesday’s second leg.

Meanwhile, Vinicius Junior scored a goal in each half as Real Madrid defeated Liverpool 3-1.

Marco Asensio also scored for Madrid, which took full advantage of Liverpool's defensive blunders in the first half to take a commanding lead ahead of the second leg in England.

Mohamed Salah netted the lone goal for Liverpool early in the second half before Junior sealed the victory for the hosts.

Liverpool, which recently endured a run of poor results in the Premier League, looked lost at the start of the match at the Alfredo Di Stefano Stadium in Madrid, unable to get a shot on goal in the first half.

Junior opened the scoring on a breakaway in the 27th after a perfectly timed long pass over the top by Toni Kroos. The Brazilian forward made a nice run between Liverpool defenders Trent Alexander-Arnold and Nathaniel Phillips then chested the ball down before firing a low right-footed shot from inside the area past goalkeeper Alisson Becker.

Another long pass by Kroos – and a defensive blunder by Liverpool – led to Asensio’s second goal in the 36th. Alexander-Arnold tried to clear the ball from Kroos but headed it across the area directly to Asensio, who flipped the ball over the charging Becker and finished the move on the other side to push it into the open net.

The English side improved after the break and was able to pull one back early in the second half with Salah finding the net from close range after a shot by Diogo Jota was partially blocked by Luka Modric in the 51st. The goal had to be confirmed by video review because of a possible offside by Salah.

With the goal, Salah became the fifth Liverpool player to score in four consecutive European appearances.

Asensio, who scored in each of Madrid’s last four games in all competitions, squandered the chance to increase Madrid’s lead on a breakaway in the 64th. But a minute later, Júnior didn’t miss his opportunity after a pass by Modric, finding the net with a shot from near the penalty spot.

Liverpool had kept four consecutive clean sheets away from home going into the game in Madrid. It has not had five in a row in away games this century.

Madrid got the win even though its defensive problems compounded just before the game as Raphael Varane tested positive for the coronavirus. Captain Sergio Ramos had already been ruled out because of an injury.

Coach Zinedine Zidane used reserves Eder Militao and Nacho Fernandez in central defense and had to move away from a 3-5-2 formation that he had preferred to use in previous games.