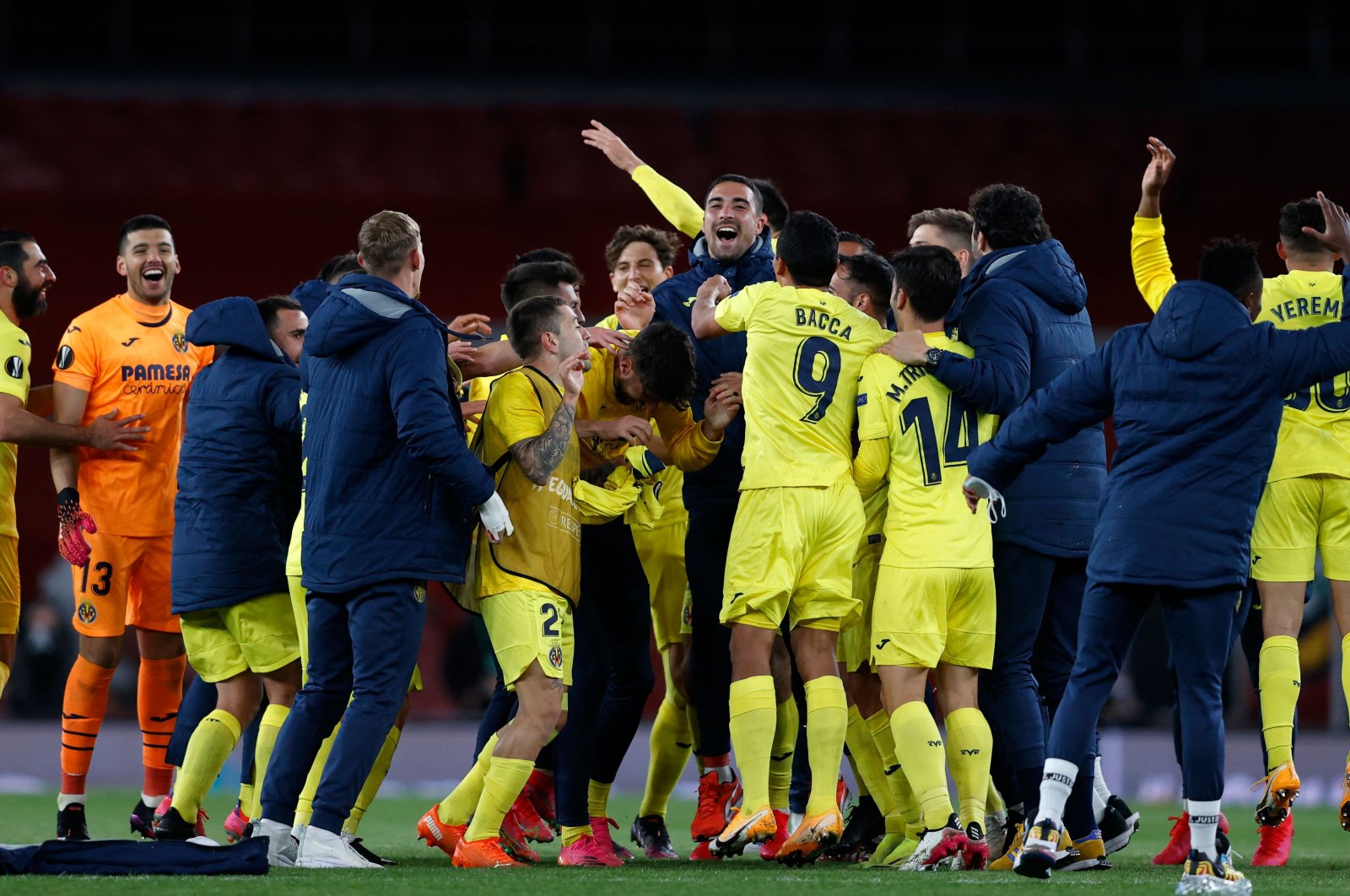 Villarreal players celebrate after reaching the UEFA Europa League final with a draw against Arsenal at the Emirates Stadium, London, England, May 6, 2021. (AFP Photo)
by French Press Agency - AFP May 25, 2021 12:16 pm
RECOMMENDED

Spanish La Liga side Villarreal will look to surprise Manchester United in the Europa League final Wednesday as it aims to turn around an otherwise mediocre season.

For Villarreal coach Unai Emery, who is in his first season at the helm, a win will add to his already sparkling Europa League record.

Villarreal had just finished fifth in La Liga when they appointed Emery as coach last summer, with the Spaniard's remit to take the club closer to winning titles and securing Champions League qualification.

He could achieve both in one fell swoop in Gdansk, where an upset against the much-fancied United would not only clinch Villarreal its first-ever major trophy but also a place in Europe's premier tournament next season.

"We respect United but we think we're capable of winning this trophy," said Emery last week. "We are going to play with the confidence we've shown throughout the whole competition."

The drop-off though with a defeat would be huge, given Villarreal would not only end the season without silverware but shorn of a place even in the next Europa League.

Their loss to Real Madrid on Saturday meant Emery's side finished seventh in La Liga, two spots lower and two points fewer than it managed last season, and enough only to qualify for UEFA's new and less lucrative Europa Conference League.

There is no real sense yet of Emery being under pressure, in part because so much depends on how Villarreal fares against United, in what is its first European final since winning the Intertoto Cup in 2004.

"Villarreal has reached the Europa League semis three times before so if we hadn't got to the final again it would have been hard for us," said the club's former midfielder Marcos Senna, who was in the team that won the Intertoto Cup 17 years ago.

"Manchester United is the clear favorite because of its history and budget. We've snuck through the back door a bit but if we play well, I think we can spring a surprise."

Emery knows what it takes to win the Europa League, having triumphed three times in a row with Sevilla between 2014 and 2016, the last time by beating Liverpool 3-1 in the final in Basel. He also reached the final two years ago with Arsenal, only to lose to Chelsea.

"Manchester United was the favorite from the start to win this tournament and it has managed to reach the final," said Emery. "There were other teams who were favorites and haven't done that but we have always seen ourselves as a contender."

Villarreal is also flying the flag for Spain as the one team that denied the English Premier League a clean sweep of European finalists, with Manchester City up against Chelsea in the Champions League final Saturday.

If Villarreal defeats United, Spain will boast seven of the last 10 Europa League champions, the others belonging to Chelsea in 2013 and 2019, and United in 2017, when Jose Mourinho's side beat Ajax.

"The Premier League is dominating football in Europe," Emery said. "But to reach a final you always have to knock out big teams, or teams that have knocked out big teams themselves, like Dinamo Zagreb. Games like these are a challenge. They tell you what level your team is at."