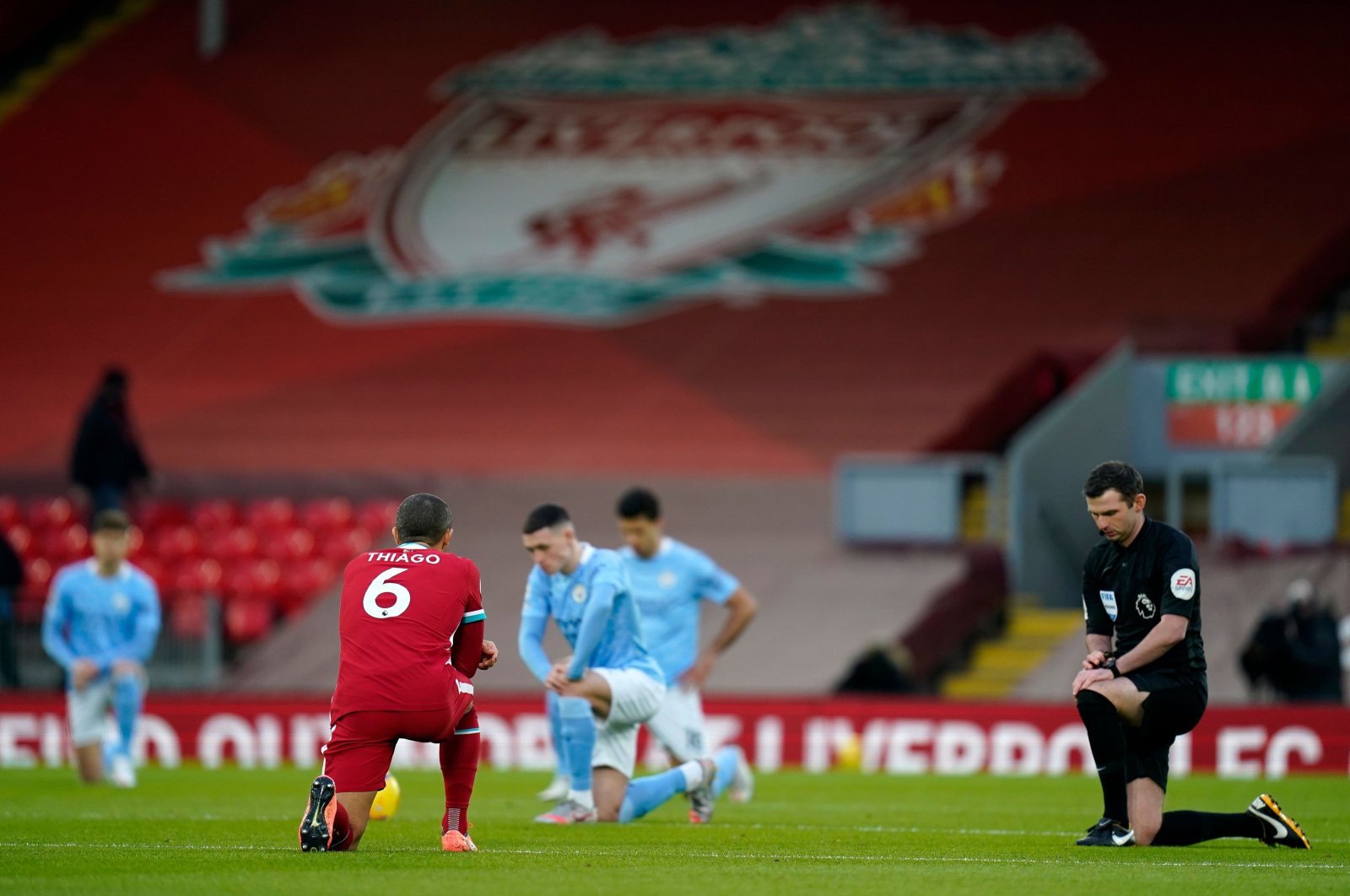 English referee Michael Oliver (R) and players "take a knee" in support of the No Room For Racism campaign ahead of a Premier League match between Liverpool and Manchester City at Anfield in Liverpool, England, Feb. 7, 2021. (AFP Photo)
by ASSOCIATED PRESS Feb 11, 2021 2:46 pm
RECOMMENDED

The leaders of English football asked the heads of Facebook and Instagram on Thursday to show "basic human decency” by taking more robust action to eradicate racism and for users' identities to be verified.

There has been growing outrage that players from the Premier League to the Women's Super League have been targeted with abuse on Twitter and Facebook-owned Instagram.

"The language used is debasing, often threatening and illegal,” the eight English football leaders, including from the Football Association and Premier League, wrote to Twitter CEO Jack Dorsey and Facebook chairperson Mark Zuckerberg. "It causes distress to the recipients and the vast majority of people who abhor racism, sexism and discrimination of any kind.

"We have had many meetings with your executives over the years but the reality is your platforms remain havens for abuse. Your inaction has created the belief in the minds of the anonymous perpetrators that they are beyond reach," they said.

Racism has been targeted online at Manchester United players Marcus Rashford, Axel Tuanzebe, Anthony Martial and Lauren James in recent weeks as well as counterparts from other clubs.

"As recent weeks have seen the levels of vicious, offensive abuse from users of your services aimed at footballers and match officials rise even further, we write to ask that for reasons of basic human decency you use the power of your global systems to bring this to an end," the letter to Dorsey and Zuckerberg continued.

While Instagram said Wednesday that it would disable accounts that send racist content in direct messages, the company later acknowledged that only an unspecified number of repeated abusive messages would lead to a ban.

"The targets of abuse should be offered basic protections, and we ask that you accept responsibility for preventing abuse from appearing on your platforms and go further than you have promised to do to date," the letter states.

The football officials ask for messages to be filtered and those containing racist and discriminatory material to be blocked from being posted. They also want an improved verification process that ensures users provide accurate identification information and are barred from registering if banned.

"Many footballers in English football receive illegal abuse from accounts all over the world and your companies have the power to bring this to an end,” the letter states.

The letter was signed by the CEOs of the English Football Association (Mark Bullingham), Premier League (Richard Masters), English Football League (Trevor Birch), Professional Footballers’ Association (Gordon Taylor) and League Managers’ Association (Richard Bevan). It was also signed by the managing director of the referees' body (Mike Riley), the chairperson of the anti-racism group Kick It Out (Sanjay Bhandari) and the FA director of the women’s professional game (Kelly Simmons).

"We call for meetings with your organizations to discuss the evidence of abuse on your platforms, the action you are taking, and how you plan to directly address the matters outlined in this letter,” they wrote to Dorsey and Zuckerberg.