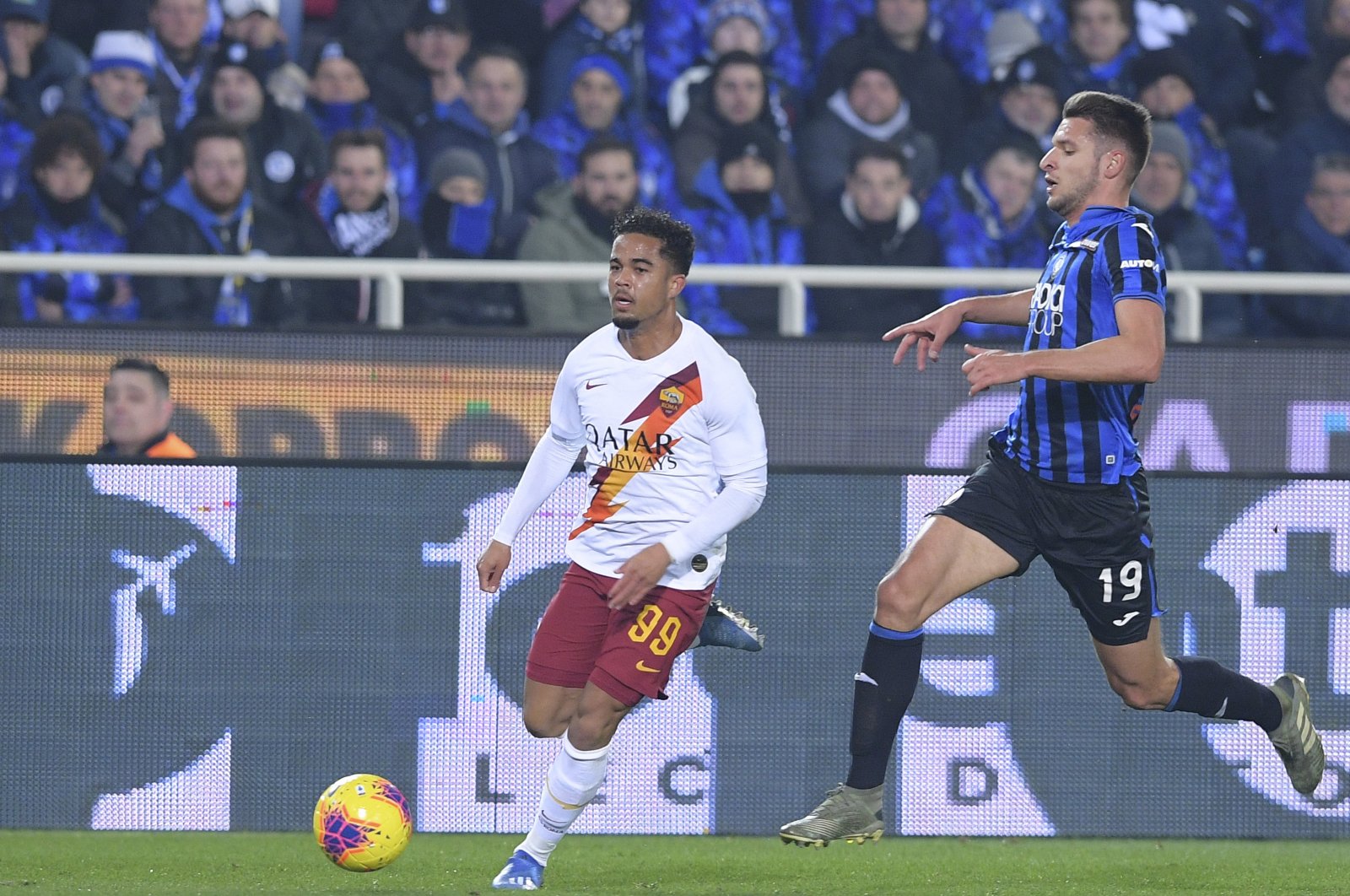 Roma's Justin Kluivert (L), during a match, in Bergamo, Italy, Feb. 15, 2020. His father Patrick is the third-highest goal-scorer for the Netherlands international team with 40 goals.(AP Photo)
by Anadolu Agency Jun 21, 2020 12:12 pm
RECOMMENDED

Many young boys grow up viewing their fathers as role models, with many deciding to carry on in their footsteps as a career path.

This is also the case in modern football, with the children of many star players going on to even surpass the achievements of their forerunners. For most, however, the pressure to meet expectations can prove all too high.
Cesare and Paolo Maldini

Cesare Maldini is a Milan legend who lifted four Serie A titles and the European Cup in 1963. He played 398 matches for Milan from 1954 to 1966 and won the Winners' Cup and Coppa Italia in 1973.
Regarded as one of the best defenders in the history of modern football, his son Paolo also left his mark on Milan’s history, clocking up some impressive achievements. He won seven Serie A titles and five European Cups across the course of 901 appearances for Milan between 1984 and 2009.
Both were captains at Milan for multiple years.

Regarded as one of the best-attacking midfielders during the 1980s and 1990s, Romania's Gheorghe Hagi played for some powerful clubs, including Steaua Bucharest, Real Madrid, Barcelona and Galatasaray.
He won four consecutive Turkish league titles during his four-year stint with Galatasaray and was a key player of the club's UEFA Cup and UEFA Super Cup glories in 2000.
His son, Ianis, a product of the Gheorghe Hagi Football Academy, started his career at Viitorul Constanta, then played for Fiorentina and Genk.
The 21-year-old plays the same position as his father and is now making appearances for the Glasgow Rangers in Scotland, as well as the Romanian national team like his father.

Former Dutch forward Patrick Kluivert is the third-highest goal-scorer for the Netherlands international team with 40 goals. He won two consecutive Eredivisie titles with Ajax during the 1994-95 and 1995-96 seasons, as well as lifting the UEFA Champions League title and UEFA Super Cup in 1995.
Kluivert played with major clubs of the likes of Milan and Barcelona and lifted the La Liga title in 1999.
His son, Justin, began his career as his father did at Ajax, before moving on to the Serie A club Roma in 2018. With a 22.5 million euros ($25 million) market value, the 21-year-old is viewed as one of the best young wingers in European football.

Peter and Kasper Schmeichel
Peter and Kasper Schmeichel of Denmark each left their mark on the English Premier League, becoming the only father and son to lift the title in England's top tier division.
The elder Schmeichel was one of the greatest goalkeepers of the 1990s as captain of the Manchester United squad, winning a series of major titles.
He won five Premier League titles a UEFA Champions League cup, having won the European Championship trophy for Denmark in 1992 – an incredible feat for such an underdog nation when it comes to the sport.
Kasper Schmeichel, meanwhile, is also a goalkeeper and began his career at Manchester City, later becoming a regular for Leicester City since 2010.
Leicester City amazed the global football community with a fairy-tale Premier League win in 2016.
Roger and Romelu Lukaku
Roger Lukaku's career began in Africa with the Cote d'Ivoire team in 1990. After three years, he moved to Belgium's Boom FC in 1993.
Throughout his career, he played for several Belgian clubs and joined the Turkish club Gençlerbirliği in 1997, making 34 appearances.
Roger Lukaku of the Democratic Republic of Congo, meanwhile, chose to play for the national team of his country of birth, then known as Zaire.
Romelu Lukaku played for Belgium's Anderlecht and several English clubs since, including Chelsea.
He was one of the top signings in the summer of 2019, with Inter Milan signing him away from Manchester United for 65 million euros ($71.5 million).
The forward helped Belgium win bronze at the 2018 FIFA World Cup in Russia.