Fati returns in Messi's No. 10 shirt to lift struggling Barcelona 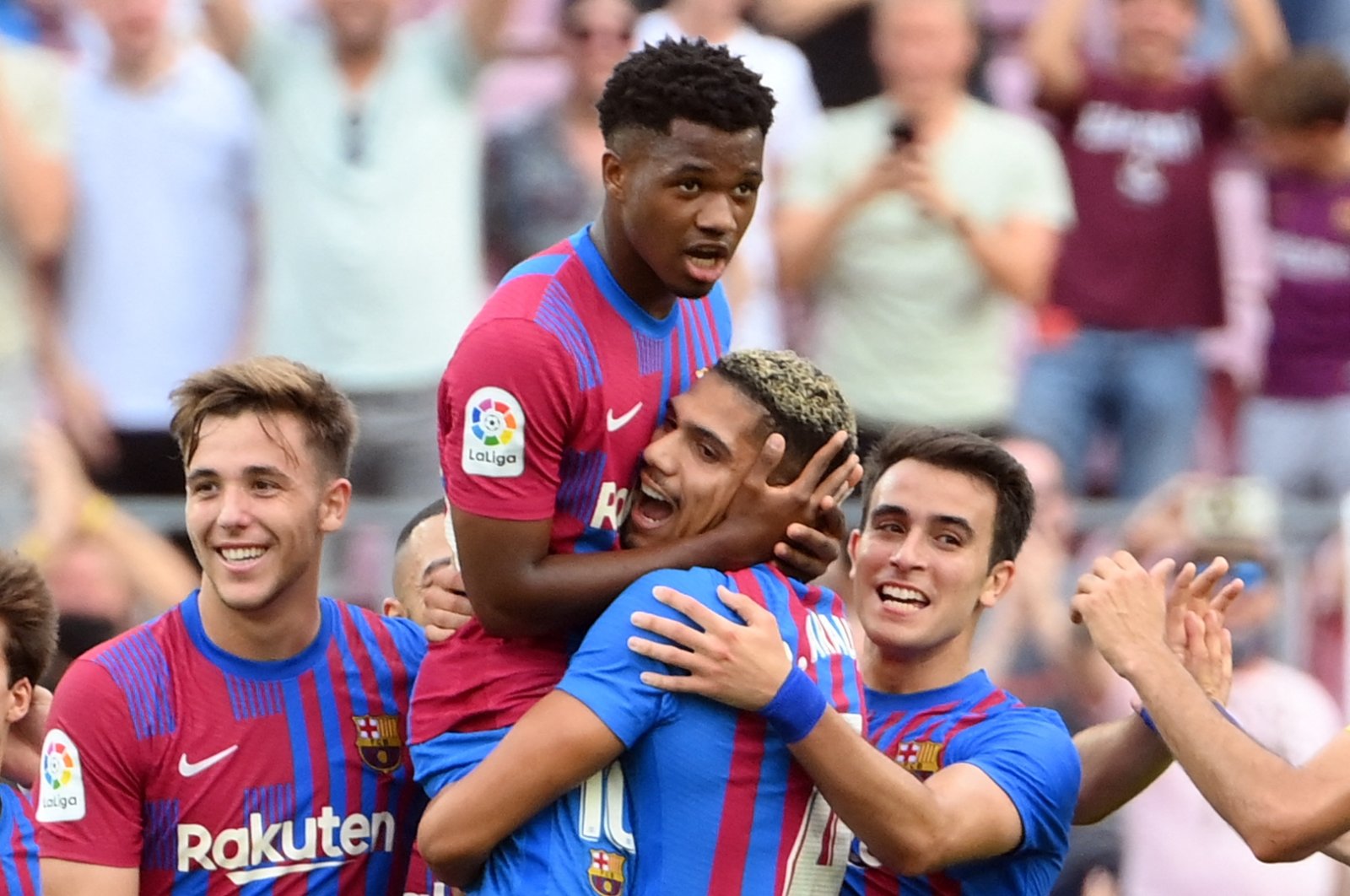 After nearly 10 months out injured, Barcelona's Ansu Fati made a memorable return as he lifted a struggling Barcelona side with a goal in a 3-0 victory over Levante on Sunday.

Fati, wearing the No. 10 shirt previously belonging to Lionel Messi, came on to a raucous reception at Camp Nou, 323 days after his last appearance in November last year.

And the 18-year-old came back in style, carrying the ball forward and lashing it into the net in injury time to complete a much-needed victory for Barca.

Fati was hoisted into the air by his teammates and then he climbed into the crowd behind the substitutes bench, to embrace members of his family and the club's medical staff.

"I want to say thank you to the doctors and everyone who has been with me through all this, and the fans who have been unbelievable," said Fati afterward.

After needing three operations on a knee injury, many wondered if Fati would ever get back to the levels he showed so spectacularly when he first broke into the first team in 2019.

There is still a long way to go for the teenager but his return, and a brilliant goal, raised the roof at Camp Nou and lifted spirits after a turbulent few weeks consumed by speculation about Koeman's future.

"You saw the reaction in the stadium – we know he is a very good player," said Koeman's assistant Alfred Schreuder, who took on media duties with Koeman serving a touchline ban.

"The goal was not even a chance. He created it out of nothing. This is the individual quality he has and it's what we need."

Koeman may not be saved by this result – the club could look to make a change during the upcoming international window – but there was at least renewed positivity inside the stadium, even before Fati's dramatic intervention.

Barcelona's first win in four games moves it up to fifth in La Liga, five points behind Real Madrid with a game in hand. It plays Atletico Madrid at the Wanda Metropolitano next weekend.

Memphis Depay had given Barca an early lead with a penalty and Luuk de Jong made it two by scoring his first goal for the club since joining from Sevilla on the last day of the transfer window.

But the real excitement centered around the 17-year-old Gavi and 19-year-old Nico Gonzalez, both academy graduates, who delivered displays to suggest Barca's youngsters could yet be the faces of the new era.

Depay earned the penalty he scored in the fifth minute when he skipped past and tripped over the dangling leg of Nemanja Radoja before converting to give Barca the perfect start.

De Jong's second was instigated by Depay as well as he released Sergino Dest down the left, who cut inside and curled a pass into the striker, who took the ball on and fired in.

Barca should have extended its lead before halftime.

Gerard Pique somehow poked wide from a yard out before Gavi's superb through ball sent Depay clear but he left himself too much to do from the angle. Gavi then tried and failed to lob Aitor Fernandez.

Levante was a generous opponent, allowing Barcelona space to dictate through the midfield while never really threatening a comeback.

Nico lashed wide from the edge of the box and Depay was denied again from the angle before substitute Riqui Puig almost completed a weaving run but overran his final touch.

Puig, a popular graduate of Barca's La Masia academy, had enjoyed an enthusiastic reception from the home fans but it was nothing compared to Fati's welcome, the teenager unable to hold back a grin as he heard the cheers.

The grin soon grew wider, a winding run through midfield accompanied by the perfect finish, a low shot into the corner.

Real Sociedad climbed to second, a point off the top of the table after it edged past Elche 1-0, thanks to a late goal from captain Mikel Oyarzabal.

Oyarzabal capitalized on a defensive error in the 81st minute to score his fifth goal in seven games this season and put La Real in touching distance of Real Madrid.