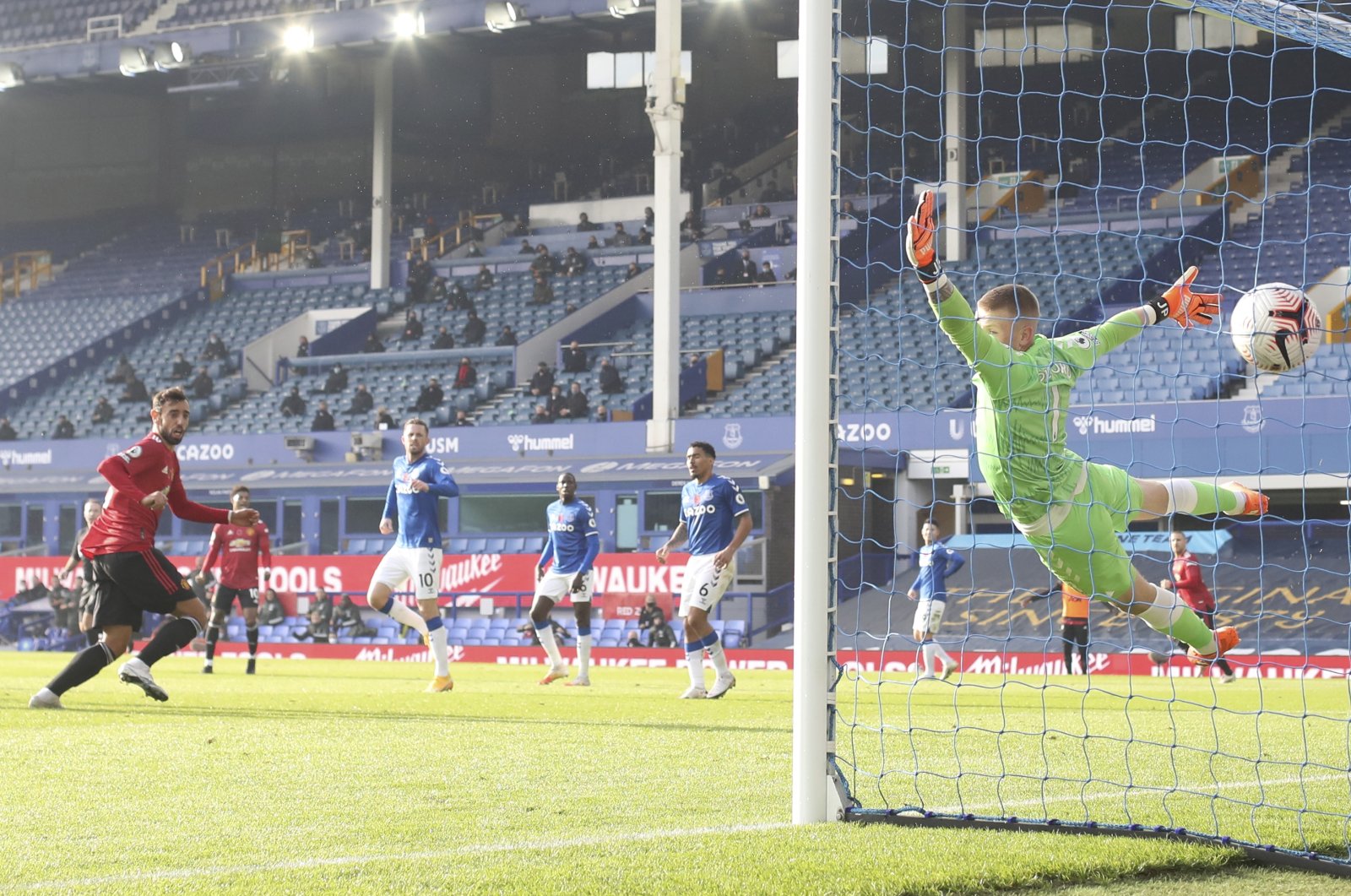 Bruno Fernandes inspired a Manchester United fightback against Everton Saturday, scoring twice in a 3-1 win to ease the pressure on Ole Gunnar Solskjaer and deny the Merseysiders a return to the top of the Premier League.

United have failed to win at home in the league this season and there were questions over Solskjaer's future after the midweek defeat to Istanbul Başakşehir in the Champions League.

But United, who move up to 13th and 10 points, responded with a display which, while far from smooth, was full of character, epitomized by captain Harry Maguire's determined display at the back.

"We knew we had to get three points today. It's early in the season and we don't look at the table but the points we have accumulated isn't good enough for this club," said Maguire.

"It's important to bounce back from setbacks. We've been questioned but we know we don't answer them in 90 minutes, we answer them day in, day out. The lads are working tirelessly for this club, everyone wants to improve and do better. The manager has to pull the lads off the training ground."

The pressure on Solskjaer intensified when Everton took the lead at Goodison Park in the 19th minute with Brazilian winger Bernard's low drive through Aaron Wan-Bissaka's legs squeezing in the bottom corner.

However, United’s apparent tactic of overloading Everton’s right side paid off with both of Fernandes’ first-half goals coming from that flank.

United drew level when Portugal playmaker Fernandes met a Luke Shaw cross from the left with a perfectly angled and firm header in the 25th.

Everton left back Lucas Digne then struck the post from a promising position but United were growing into the game and it was no surprise when they took the lead.

Fernandes floated in a cross from the left which Marcus Rashford rose to head into the bottom corner but although the striker failed to connect, the ball went in off the post.

Substitute Edinson Cavani added the third in stoppage time, finishing off a counter-attack led by Fernandes for his first goal since joining the club on deadline day last month.

While United has yet to win at Old Trafford in the league – the main reason it came into the game in 15th place – -the team has now won all three of its away games. Fernandes has scored in each of them.

The loss was the third straight defeat for Carlo Ancelotti's side who, after being the early season pace-setters with four wins in a row, have now slipped to fifth in the standings.

All of the defeats have come while the team’s big attacking threat down the left – Brazil forward Richarlison – has been suspended because of a red card against Liverpool.

"The problem was that after we scored we were not able to defend well, and they took advantage. They were able to score easily. We said before the game we had to defend better and we did not defend good enough. We were slow at the back, we have to improve," said the Italian manager.

"I know how to manage difficulties, every year you have them. We can start again after the international break," added Ancelotti.

A major factor behind the loss to United was Everton’s problems down its right, with full back Seamus Coleman often left all alone to handle the raids down that wing by Rashford and Shaw, while Fernandes also popped up there on occasions.

The back-tracking of James Rodriguez, Everton’s right-sided attacker, left a lot to be desired and it was only when the Colombian came into a central area midway through the second half that he really had an impact.

United had a good shout for a penalty turned down in the second half when Everton goalkeeper Jordan Pickford dropped the ball from a free kick and then hacked at the knee of Harry Maguire as the center back tried to turn the loose ball into the net.

The incident revived memories of Pickford’s challenge on Virgil van Dijk last month which left the Liverpool defender with a serious knee injury that could keep him out for the rest of the season. Maguire wasn’t hurt, though, and no foul was given by the match officials.