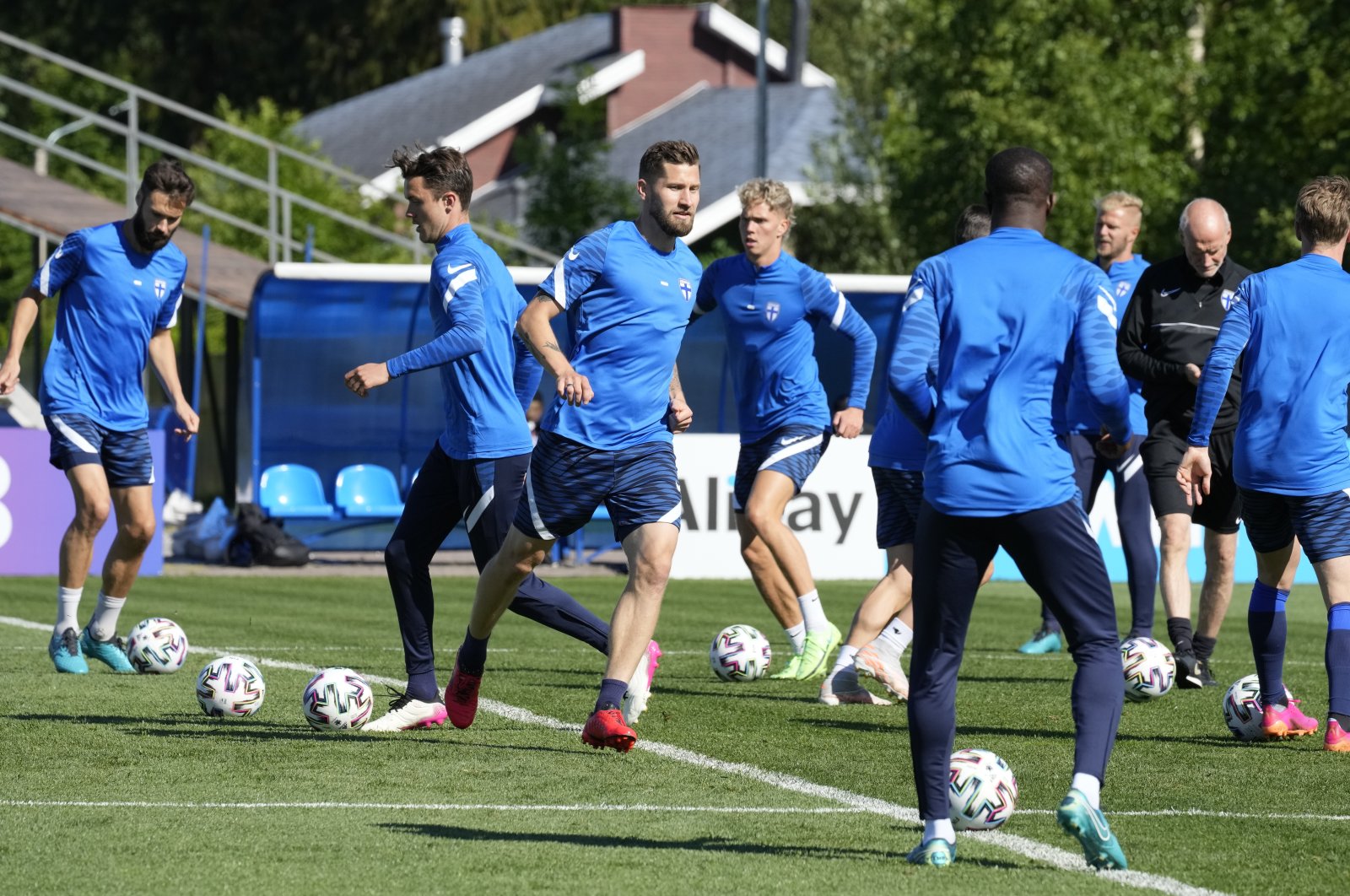 Finland players attend a training session on the eve of the Euro 2020 Group B match against Russia in Zelenogorsk outside St. Petersburg, Russia, June 15, 2021. (AP Photo)
by REUTERS Jun 15, 2021 5:47 pm
RECOMMENDED

European debutants Finland will be hoping to secure a place in the Euro 2020 knockout stages prepare as it faces Russia in St. Petersburg on Wednesday, following an emotional start to the tournament.

Finland's 1-0 victory over Denmark on Saturday in its first game at the finals of a major tournament was overshadowed by the collapse of Denmark midfielder Christian Eriksen during the match due to a heart attack.

"It was a day full of emotions," Marko Karvinen, chairman on the Finland national team's fan club, told Reuters.

"We were in high spirits in the morning and I even shed a few tears of happiness as we marched to the stadium. But with the situation with Eriksen, those tears turned to ones of sadness."

Karvinen, who has attended some 50 away games since the 2009 European Under-21 Championships in Sweden, said it was an "unreal" situation that tempered some of the joy from the win.

"There is still a feeling of disbelief, but little by little you have to start looking ahead and think about tomorrow's match," he said.

Some 1,000 Finns are traveling to Russia for the group stage, with around 10 buses arranged by the fan club departing on Tuesday alone.

However, the worsening COVID-19 situation in St. Petersburg, where restrictions to contain the pandemic were tightened on Monday, has caused many to reconsider their travel plans.

"Quite a few people, even today, have informed us they will skip the trip," Karvinen said, adding that others have opted to travel in their own cars rather than by bus.

"We are taking our own car as well, and will try to avoid moving outside as much as possible."

Coronavirus testing at the border and other new curbs could cause concerns, but Karvinen predicts that once fans have crossed the border, excitement for the match should kick in.

"We're definitely going there to confirm a spot in the next stage already in the Russia game. At least us fans will do everything in our power to get those three points," he said.

To make the fans' dream come true, Finland's defense will have to work hard on Wednesday as Russia bid to bounce back from a 3-0 loss to Belgium.

"You don't travel that far to have a losing mentality. You must have faith until the end," said Karvinen, who has followed Finnish football for 40 years.

The pressure, in the meantime, is on Russia to win, especially since the team finishes the group play with a trip to Copenhagen to play Denmark, and coach Stanislav Cherchesov said criticism of his team's performance in the loss to Belgium was "justified.”

Daler Kuzyaev trained with the rest of the squad on Monday after going off midway through the first half against Belgium following a clash of heads. Yuri Zhirkov was also withdrawn before halftime of that match with a thigh injury and has been ruled out of the rest of the tournament.

Meanwhile, Finland's players were discussing Tuesday whether they will take a knee before kickoff against Russia, with the anti-racism gesture having been jeered by spectators inside the St. Petersburg Stadium when Belgium's players performed it.

Cherchesov said he didn't hear the boos and, when asked if he would urge spectators to respect players' decision to make the anti-racism stance, said "everyone can make their own choice.”