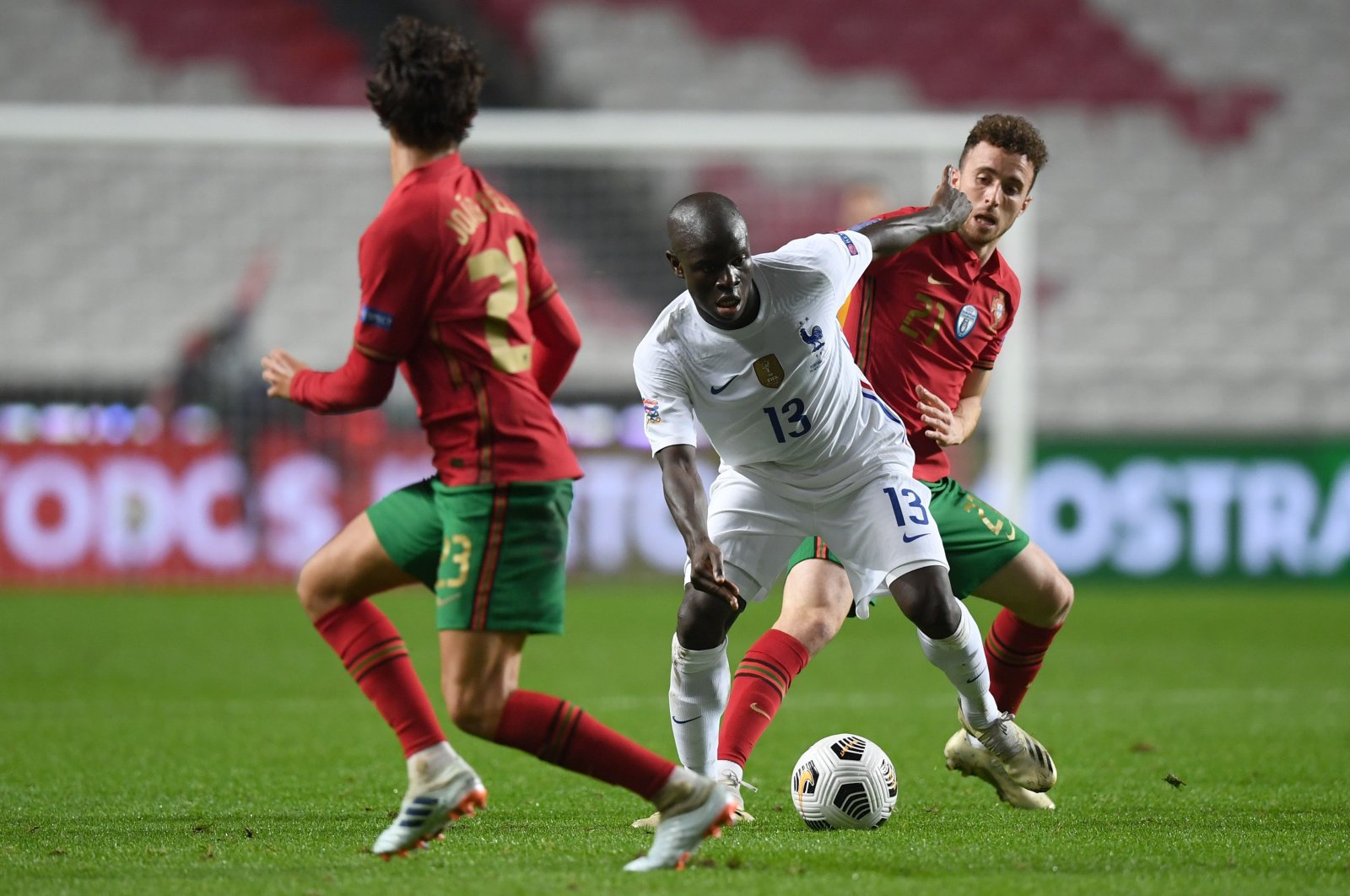 The winner-takes-all showdown between Cristiano Ronaldo's Portugal and world champion France on Saturday was decided by one of the least likely scorers on the quality-packed pitch at Lisbon's Stadium of Light.

Midfielder N'Golo Kante, whose prowess is tackling, not scoring, notched the only goal of a 1-0 win that ended Portugal's bid to defend its UEFA Nations League title and sent the French into the final-of-four.

Joining the fray in a crowded area in search of a loose ball or rebound, Kante was rewarded when goalkeeper Rui Patricio fumbled a ball into his path for him to finish off in the 54th minute.

It was Kante's second international goal in his 44th appearance for France. His other strike came in 2016 in a friendly against Russia.

France clinched a first-place finish in Group A3 with three more points than Portugal and the tiebreaker on head-to-head goals with one game to play. Portugal won last year's inaugural Nations League.

France outplayed European champion Portugal and was denied a lead by halftime thanks only to Patricio.

"Given the quality of the opposition, it's, of course, one of our best performances of recent times," France coach Didier Deschamps said. "We deserved the win and we've fulfilled our objective of finishing top. I'm very proud of the players. They proved tonight that France is still a great team."

Starting for the injured Kylian Mbappe, France striker Anthony Martial hit the post on the half-hour mark and had two more good chances denied by Patricio.

Patricio closed quickly to smother Martial's attempt to tap in a great through ball by Antoine Griezmann in the 12th minute. Martial's header from a well-executed set-piece hit the crossbar on the half-hour mark, and Patricio stood firm to block another tap-in by Martial of Lucas Hernandez's low cross in the 41st.

Patricio kept his side in the match until shortly after the restart when he failed to keep his grip on a shot by Adrien Rabiot. Instead, he spilled the ball into the path of Kante to finish off.

Forced to focus on defending, Portugal's playmaking trio of Bruno Silva, Bruno Fernandes and Joao Felix struggled to get involved.

Portugal star Cristiano Ronaldo was left seven goals shy of the men's national team, a record held by former Iran striker Ali Daei with his 109 goals. His best chance came just before halftime when he headed the ball inches above the bar.

Portugal mustered its two best scoring chances once it fell behind.

Defender José Fonte almost equalized in the 60th when he headed off the post. France goalie Hugo Loris protected the lead by stretching to block a stinging shot by substitute Joao Moutinho with 15 minutes left.

It was Portugal's first home defeat in a competitive match in six years. It had not lost on home soil under coach Fernando Santos.

"We struggled a lot. France in the first half was superior," Santos said. "In the second half, we got better. It was a different game and we ended up suffering a decisive goal."

Elsewhere, Spain captain Sergio Ramos missed two penalties but teammate Gerard Moreno came off the bench to grab a late equalizer and snatch a 1-1 draw away to Switzerland.

On the night of his European men's record-setting 177th international appearance, Ramos was given two chances from the spot to celebrate with a goal. He missed them both.

Switzerland goalkeeper Yann Sommer twice guessed right, and dived to his right, to save in the 57th and 80th minutes. Though the first was well struck, the second was a flat, slow flop of an attempted chip and kept Spain trailing by one goal.

Ramos was spared further embarrassment by substitute Gerard Moreno firing an 89th-minute leveler in a 1-1 draw in the Nations League.

Still, Spain coach Luis Enrique was not going to lose faith in his captain who is among the world football's most battle-hardened defenders.

"Ramos hadn't missed in 25 tries," Enrique said. "If there had been a third penalty, he would have taken it as well. And a fourth, and a fifth."

The Ramos drama, as he passed Italy goalkeeper Gianluigi Buffon's European men's mark of 176 international games, took some attention from a high-class goal that gave Switzerland a 26th-minute lead.

Spain's lapse in Switzerland let Germany take the lead in Group 4 of the Nations League top tier ahead of their decisive meeting on Tuesday in Seville.

Germany won 3-1 against a Ukraine team that lost four players to positive tests for COVID-19 on Friday.

Though Ukraine took a surprise early lead, Leroy Sane soon leveled for the 2014 World Cup winner. Timo Werner then scored twice on his return to the Leipzig stadium where he made his name before an offseason move to Chelsea.