Galatasaray’s UEFA Cup victory on May 17, 2000: Making of a revolution in Turkish football 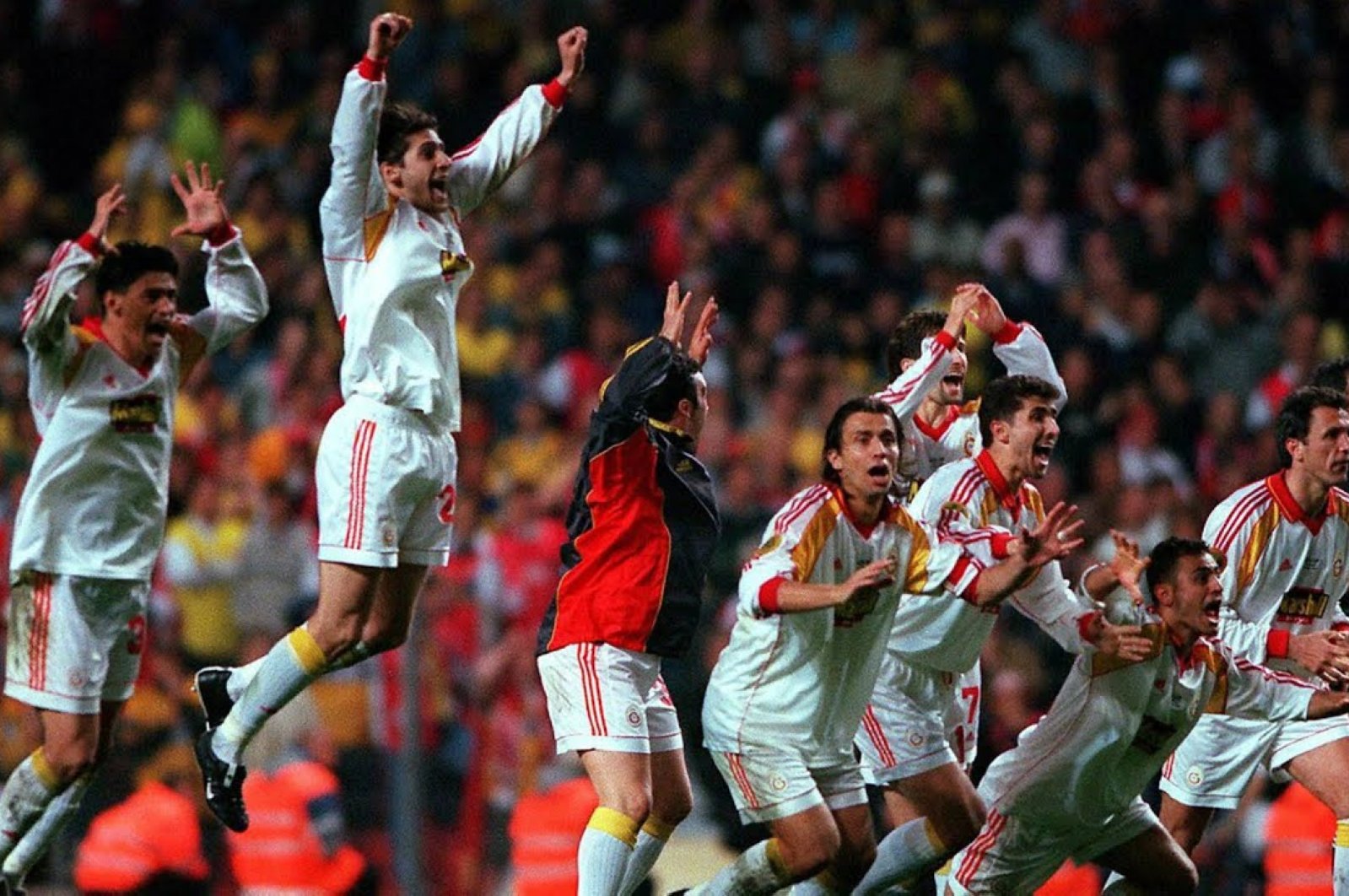 This is the story of the people who only had a single possibility: Bringing the UEFA Cup to Turkey, for the first time ever in Turkish football

I cannot describe the moment I saw the UEFA Cup in the hands of Turkish footballers.

That was the moment of truth: Turks can achieve anything they put their minds to, and they had just proved it.

Being a Galatasaray fan my entire life, I had to wait until I was 10 to see my team achieve something that had earlier been deemed impossible.

Road to the cup

It was back in 1999 and Galatasaray had already been crowned Turkish champions three consecutive times. This was a period when all children born in Turkey grew up to be Galatasaray fans and legendary coach Fatih Terim was “seeking every cup possible,” as always. But this time, his target was the UEFA Cup.

On Nov. 3, 1999, Galatasaray was hosting Italian heavyweights, AC Milan, in its last group match of the Champions League. No option other than a clear victory was on the table, even a tie would kick the Lions out of the European championships. So they had to win. Like I’ve said earlier, this is the story of people who only had a single option: a win.

The match was officiated by Lopez Nieto, the Spanish referee, who in an interesting twist of fate would later officiate the UEFA Cup final that Galatasaray won.

“Neither me nor our players and technical staff thought of losing for a mere second, even when we were a goal behind with just five minutes left on the clock,” Terim says regarding the victory that night.

In those last five minutes, Galatasaray managed to score two goals to bring the score to 3-2, kicking the Italian giants out of the Champions League and advanced to the lower-tier UEFA Cup themselves.

"'We will beat them,' we were all thinking during those moments. That was a thought shared by the whole stadium," said former club official Mehmet Cansun regarding the victory. "That was an overwhelmingly positive atmosphere."

On Dec. 9 Galatasaray started its journey in the UEFA Cup, and it was going to defeat another Italian team. This time it was, Bologna.

The Lions had to settle for a 1-1 draw in the first leg of the third round, playing away from home. With the upper hand of scoring an away goal in the first match, defeating Bologna in Istanbul was naturally an easier feat. Galatasaray managed to defeat the Italian club 2-1 at Istanbul’s legendary Ali Sami Yen stadium and moved onto the fourth round of the UEFA Cup.

The Lions had German giants Borussia Dortmund between them and the quarterfinals.

The first leg was supposed to be an away match for the Lions, but the Turkish expats in Germany begged to differ.

“We demanded a spot in the stadium for our fans but Dortmund rejected it, only providing us a small space behind the goal,” Cansun said regarding the match. “Before the match, I looked around and noticed something: We were surrounded by the Turks, all of whom carried Turkish and Galatasaray flags. We learned later that our fans had paid two to three times more to borrow season tickets from the holders, only for a single match,” he added.

Beating Dortmund 2-0 in the match, and later holding it to a 0-0 draw at home, Galatasaray moved to the quarterfinals.

The first leg of the quarterfinals was the sign of things to come. Beating Spain’s Real Mallorca 4-1 on the road, Galatasaray was now sure to advance to the semifinals.

Defeating Mallorca at the Ali Sami Yen Stadium 2-1 in a decisive victory, the Lions now had to brace for a politically motivated and tense period of time.

A very tragic and unfortunate event a night before the first leg, which would be played at Galatasaray’s home, took the tensions to another level.

Galatasaray's opponent was Leeds United, and two of their fans were unfortunately killed during a fight in Istanbul.

However, the Lions managed to overcome the heat and defeated the U.K. club 2-0 at home. But tensions were increasing by the day.

The away match in Leeds’ Elland Road Stadium proved to be psychologically challenging.

“They were treating us like intruders,” then-club President Faruk Süren said regarding the pre-match atmosphere.

“The fact that we went onto the field for warmup in pitch-black clothing was a part of the plan we made to defuse tensions,” coach Terim said regarding the second round of the semifinal, underlining Galatasaray’s sorrow for the deceased.

“They did not bury the deceased for 15 days and organized the funeral on the very day the second round leg match was going to be played in Leeds,” Terim added.

The Lions, however, managed to score two goals in the match that ended in a 2-2 draw. This guaranteed their ticket to the final.

Galatasaray was in the highest spirits possible.

“I’m scared that my footballers would be crushed under the psychological pressure of actually playing a final match in European competitions. Because we haven’t had such an experience so far,” coach Terim said pre-match.

But the Lions were prepared for the difficult task.

The 90 minutes ended without a goal as the teams advanced to the 30-minute extra time, which was played under the “golden goal” rule back then. If Arsenal managed to score a single goal, millions of Turkish fans’ hopes would be crushed.

Legendary midfielder Gheorghe Hagi, who was apparently provoked by Arsenal’s Tony Adams, was sent off as the extra time started.

Galatasaray would have to play with one less player, who was the backbone of the Lions’ midfield.

Then, the Yellow-Reds’ legendary defender Bülent Korkmaz was injured. Braving all the pain, he decided to continue playing after being patched up all over his torso and arms.

One header by Thierry Henry was never going to be forgotten by Galatasaray and Arsenal fans alike.

After a successful cross by Arsenal’s Ray Parlour, Henry jumped to realize the perfect header, only to be incredibly saved by Galatasaray’s fabulous goalie, Claudio Taffarel.

If Taffarel had failed to save that header, the match would have ended in an Arsenal victory.

But fate had other plans.

The extra time ended, again without a goal.

And during the penalty shootout, Arsenal’s big guns Patrick Vieira and Davor Šuker hit the bars, and the Lions managed to score all four goals needed to secure the trophy.

It was a time never to be forgotten by Turkish football fans, and especially Galatasaray supporters.

On May 17, 2000, Galatasaray reminded us one simple fact: Turks can achieve whatever they put their minds to.