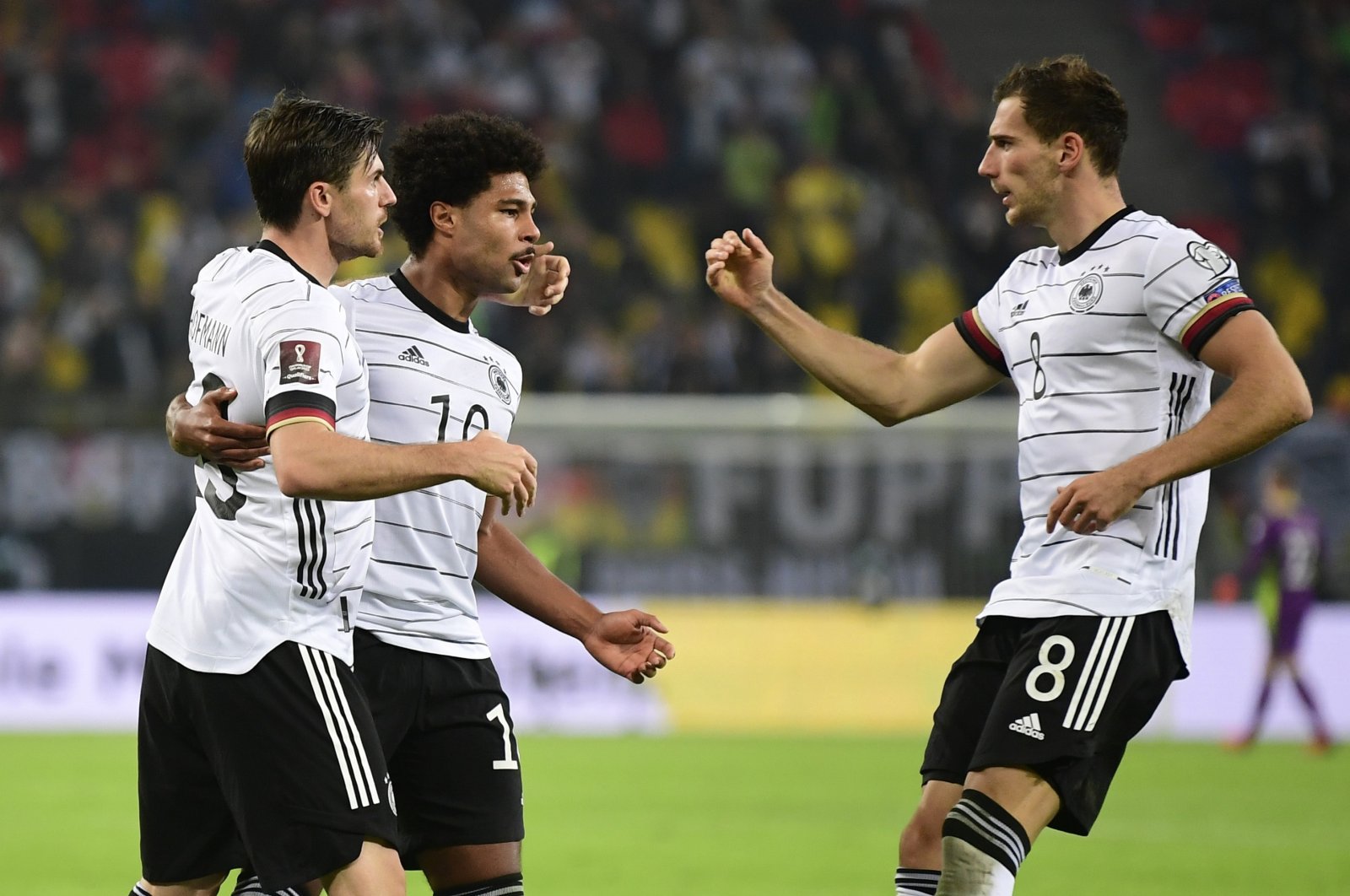 Despite an average show against Romania last Friday, Germany's mentality to come from behind and win 2-1 was lauded by fans, media and coach Hansi Flick alike and the same attitude could help it secure a place in next year's World Cup on Monday.

If all goes its way, Germany can clinch a place at next year's World Cup on Monday night in North Macedonia.

Whether the side is then also good enough to aim for a fifth world title at the finals in Qatar remains to be seen.

A few days after Germany director Oliver Bierhoff said, "We want to return to the top in the world" the team claimed a hard-earned 2-1 comeback victory against Romania in Hamburg on Friday night.

Serge Gnabry netted the equalizer early in the second half and substitute Thomas Mueller grabbed the 81st-minute winner off a corner-kick from Joshua Kimmich headed on by Leon Goretzka.

Flick and the players said their passion helped them overcome an early deficit from a solo effort by Ianos Hagi, the son of legendary Gheorghe Hagi, and a stubborn Romanian defense.

"It (the team) kept the pace high. I was very eager to win this game," Flick said.

Mueller told broadcasters RTL: "We were very dedicated. Trailing at halftime was not a good feeling. We felt we deserved more and were happy to be awarded after the break."

The 25,000 fans honored the team's effort with plenty of support, with Mueller speaking of "an explosion" after his winner and that "you could feel the connection" with the fans on the pitch.

Fans had been very critical in the final games under Joachim Loew but new man Flick has now turned around matters with four wins in as many games, while also asking for patience with the reshaped team.

"The goal we conceded is natural for a team that is developing, and when it’s not quite going your way, it’s important to come back into the game and show our strength, and that’s exactly what we did this evening," he said.

Kicker sports magazine said in an editorial that the game showed that Flick "faces a long road and a lot of detailed work but this is no reason for concern."

"In the end, it was a victory of mentality and unity," Kicker said, "virtues Flick had named as basic requirements for success."

A similar attitude will be required Monday in Skopje against North Macedonia who in the first meeting in March handed Germany its third-ever defeat in a World Cup qualifier.

Should the Germans win and Armenia fail to beat Romania, Flick's team is through to the World Cup with two games to spare.

"It is the next important step towards the World Cup. We want to qualify as soon as possible," Flick said. "It is about showing the same mentality on Monday in Skopje than we did today."

In the Asian qualifiers, traditional heavyweight Japan is struggling with one win from three matches in the final round.

Hajime Moriyasu leads Japan into Tuesday's meeting with Australia knowing his side must win to reignite its challenge and dampen speculation over his future.

The Japanese have qualified for every World Cup since its debut in France in 1998, when a team led by Takeshi Okada was forced into a playoff with Iran before confirming a berth in its first-ever finals appearance.

Sitting in fourth place in Group B with only the top two teams guaranteed to advance to Qatar next year, Japan's current predicament carries echoes of that fraught campaign.

In October 1997, during a swing through central Asia, Shu Kamo was fired following a draw with Kazakhstan and was replaced by his assistant, Okada, who eventually oversaw an upturn in fortunes that took the Japanese to France.

A similar scenario could play out in the ongoing qualifiers, with scrutiny of Moriyasu intensifying after losses to Oman and Saudi Arabia in its opening three games and a date with the unbeaten Socceroos looming.

"The Japanese no doubt have all the pressure on them because they have only won one game out of three," Australia coach Graham Arnold said ahead of the meeting at Saitama Stadium.

"Every time we step out on the field we expect to win the game ... and we will do that again on Tuesday."

Japan faces an Australia side that has won a record 11 straight matches in qualifying for Qatar 2022 and Moriyasu will again be without the talents of Mallorca's Takefusa Kubo.

The Blue Samurais have struggled in attack, with their only goal coming via Yuya Osako in last month's 1-0 win over China. Should Japan fail, three points out of 12 would force the football authorities into a decision over Moriyasu's future.

Australia lead Group B on goal difference from the Saudis, who hosts China in Jeddah on Tuesday after Li Tie's side picked up its first win of the campaign against Vietnam.

The Vietnamese, the only team yet to claim a point, take on Oman in Muscat.

The top two in Group A will face off in Tehran when Iran's perfect start will be tested by Paulo Bento's South Korea, who will be hoping Son Heung-min can shake off a knock picked up in the win over Syria to start.

Iran sits on nine points and leads the Koreans by two points, with the rest of the group trailing by a distance.

Only the top two finishers in each group will advance automatically to the World Cup finals, with the third-placed teams entering into a series of playoffs for a possible fifth Asian berth.