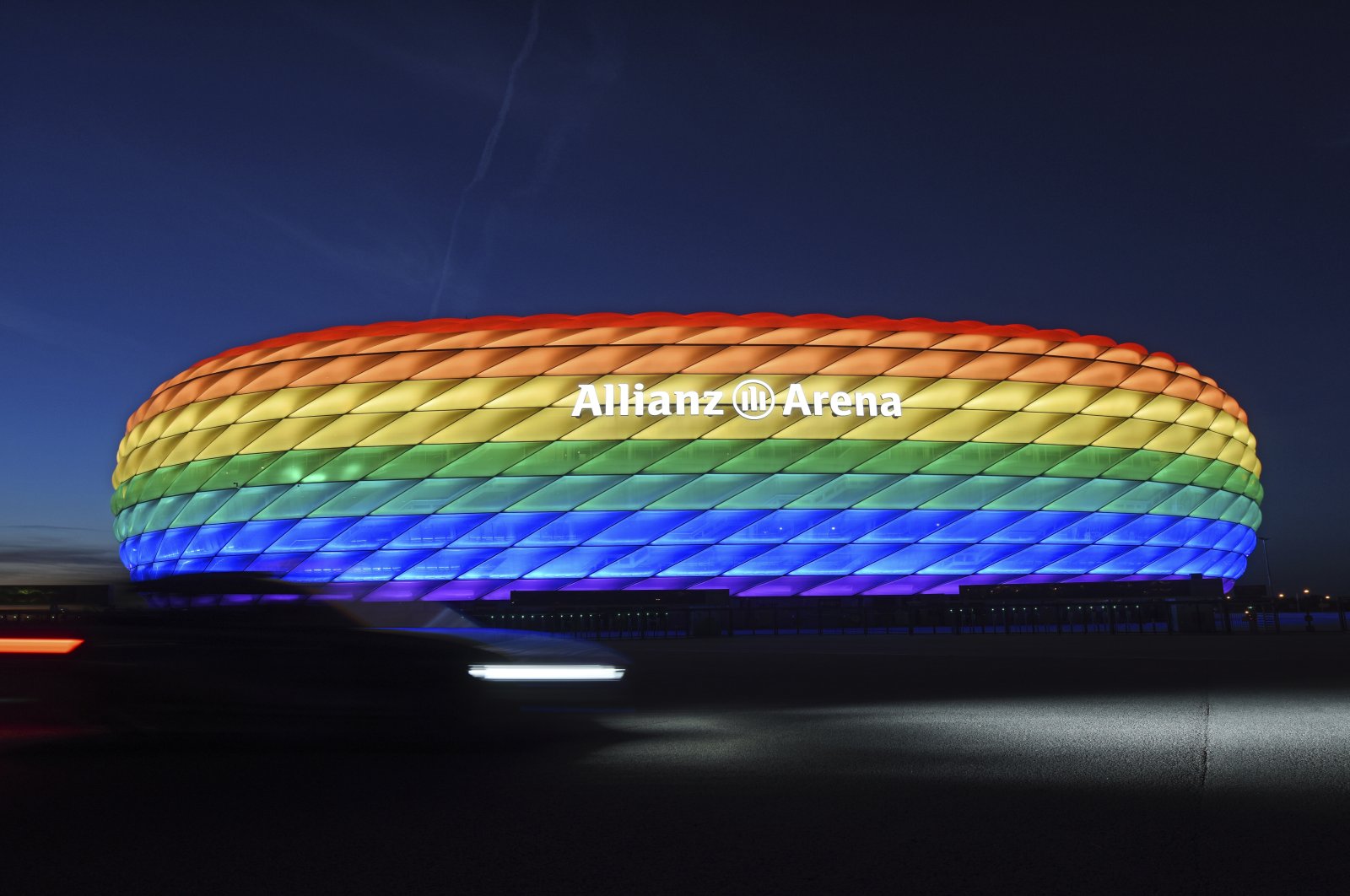 European football body UEFA and Hungary faced a storm of criticism Wednesday over Budapest's anti-diversity law after the football body's refusal to light Munich's Allianz Arena in rainbow colors for a Euro 2020 game.

Germany, in the meantime, has vowed to stage a defiant display of colors elsewhere.

With Germany due to play Hungary on Wednesday in Munich, city authorities had planned to light the Allianz Arena in rainbow colors to "send a visible sign of solidarity" with Hungary's LGBTQ community.

With criticism building, UEFA defended its decision but added the rainbow to its logo.

In a statement, European football's governing body said it "is proud to wear the colors of the rainbow," a symbol for the LGBTQ community, but stood by its decision by saying the city of Munich's request to illuminate the stadium was "political."

Budapest praised UEFA for taking a stance against "provocation," with stadia across the country preparing to light up in national colors in a tit-for-tat display during the Germany-Hungary Euro 2020 match.

In Germany meanwhile, businesses and individuals made a show of their opposition to UEFA and Hungary's anti-diversity stance, decking themselves in rainbow colors while many stadia were planning rainbow light displays.

Orban has been at loggerheads with many Western EU nations over his stance on issues from immigration to press freedom. Hungary has also recently refused to sign up to joint EU foreign policy statements on Israel or Hong Kong, sparking frustration within the bloc.

Fifteen of the EU's member states have signed up to voice their "grave concern" at the LGBTQ law that Budapest argues will protect children.

"This bill clearly discriminates against people on the basis of their sexual orientation. And it goes against all the values, the fundamental values of the European Union," von der Leyen told a media conference in Brussels.

"It's true, the football pitch is not about politics. It's about people, about fairness, about tolerance. That's why @UEFA is sending the wrong signal."

In France, a senior official said the presidency "deeply regrets" the decision, adding that although UEFA is "religiously neutral and apolitical," it "has values" and should show solidarity with Hungarians.

Vowing defiance, Munich was planning to put up rainbow-colored flags at its town hall and illuminate a huge wind turbine close to the stadium, as well as the city's 291-meter (955-foot) Olympic Tower.

"I find it shameful that UEFA forbids us to send a sign for cosmopolitanism, tolerance, respect and solidarity with the people of the LGBT community," said Munich Mayor Dieter Reiter.

Other stadiums across Germany were also planning rainbow light displays, including Berlin's iconic Olympic Stadium, as well as Bundesliga stadiums in Cologne, Frankfurt and Wolfsburg.

German newspapers, such as the Sueddeutsche Zeitung, displayed rainbows on their front pages, while Bavarian industrial giants such as Siemens and BMW also decked themselves in rainbow colors on Twitter.

Germany head coach Joachim Low said he "would have been happy" if the stadium had been lit in rainbow colors.

Markus Ulrich, a spokesman for Germany's Lesbian and Gay Association (LSVD), told AFP subsidiary SID that UEFA had "not recognized the signs of the times – and it is clear to see which side it is taking with its decision."

"The leadership of UEFA made the right decision by not assisting in a political provocation against Hungary," Szijjarto told AFP.

"It is no longer a mere statement in the common fight against any form of discrimination, but a political action," said Rainer Koch, who also sits on UEFA's Executive Committee.