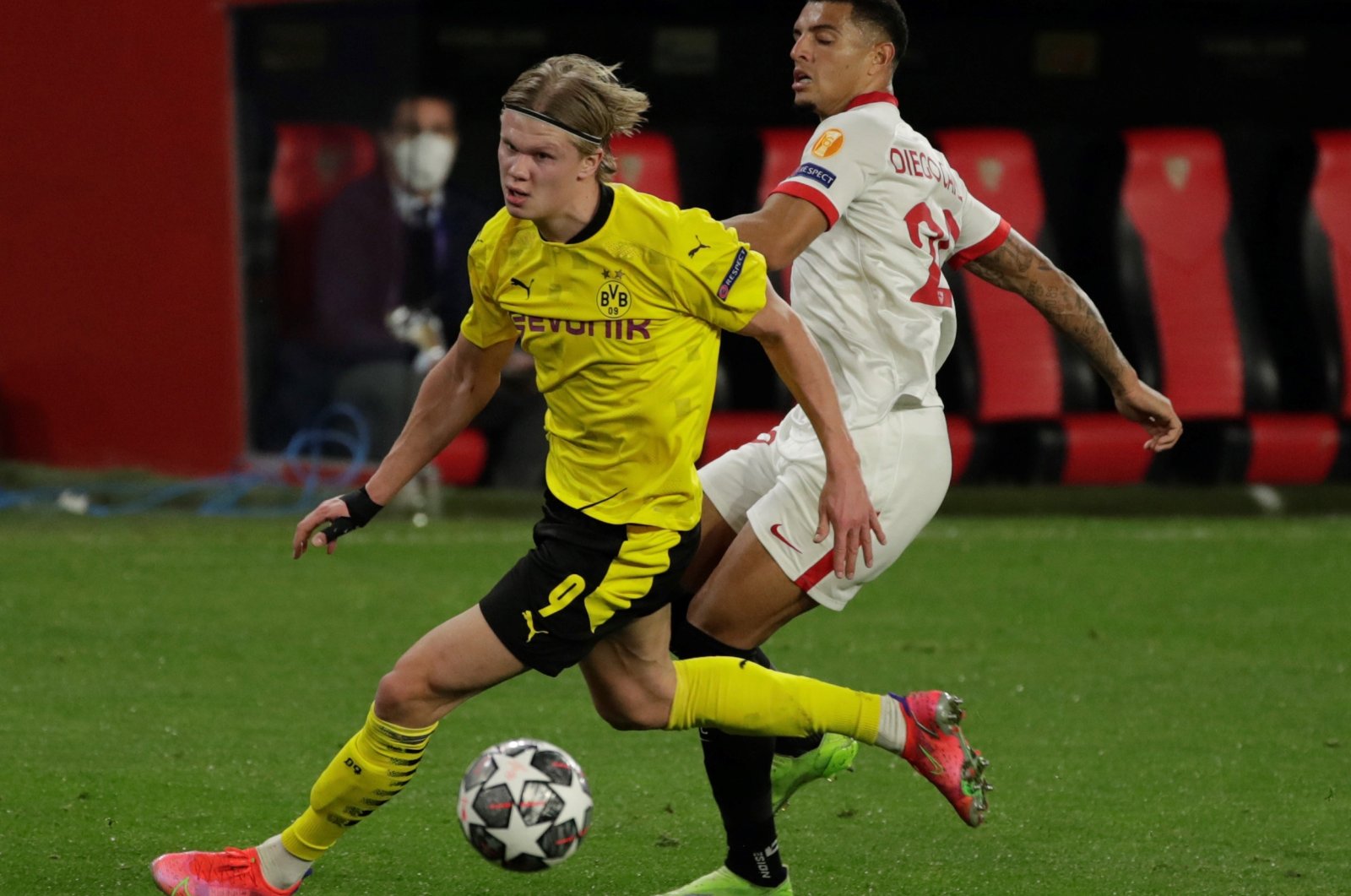 Borussia Dortmund's Erling Haaland continued his prolific run in the Champions League by scoring twice as his side came from behind to earn a 3-2 win at Sevilla in a last-16 first leg Wednesday.

The Spanish team took the lead in the seventh minute when midfielder Suso's shot skidded into the net off Dortmund's Mats Hummels but the visitors responded emphatically, leveling in the 19th thanks to Dahoud's long-range strike.

Norwegian forward Haaland put the German team ahead in the 27th, playing a one-two with Jadon Sancho and showing real hunger to slide in ahead of Sevilla keeper Bono and score.

Haaland netted his 10th goal in seven Champions League games for Dortmund to increase its lead moments before halftime but Sevilla salvaged some hope of turning the tie around in the second leg on March 9 when Dutch striker Luuk de Jong volleyed home six minutes from time.

Sevilla, last season's Europa League winners, went into the game on a run of nine victories in all competitions and without conceding in its last seven games.

Its recent results contrasted with Dortmund's poor domestic form of one win in six Bundesliga games which led to it announce Monday that it had hired coach Marco Rose from Borussia Moenchengladbach for next season.

Sevilla coach Julen Lopetegui had said before the game that Dortmund had one of the best attacks in Europe and his words quickly rang true as his side conceded three goals in the first half, as many as it had in its previous 10 matches.

Haaland was a threat from all over the pitch, striking fear into the hosts every time he picked up the ball and playing a part in all three goals.

He laid the ball off to Dahoud in the middle of the pitch, and the out-of-favor midfielder, making his first start since December, let fly with an unstoppable shot which flummoxed keeper Bono.

Haaland began the move for the second goal with a powerful run from the halfway line before combining with Sancho to score, and he latched on to a simple pass from Marco Reus before calmly slotting into the bottom corner for his second of the game.

In the other match of the night, goals from Mehdi Taremi and Moussa Marega propelled Porto to its first-ever victory over Juventus in the Champions League after it secured a 2-1 win over the Italian champions.

Taremi pounced on a sloppy back pass after 63 seconds to fire in the opener that left Juventus rattled as it failed to create any meaningful chances before halftime.

Things got worse for Andrea Pirlo’s side when Marega blasted in Porto's second 19 seconds into the second half.

Juventus, who has not won Europe's premier club competition since 1996, eventually mustered a response when Chiesa fired home a precious away goal with eight minutes remaining.

The winger's strike ended Porto’s run of five consecutive clean sheets in the competition and leaves the tie wide open ahead of the return leg.

Porto won the competition in 2004.