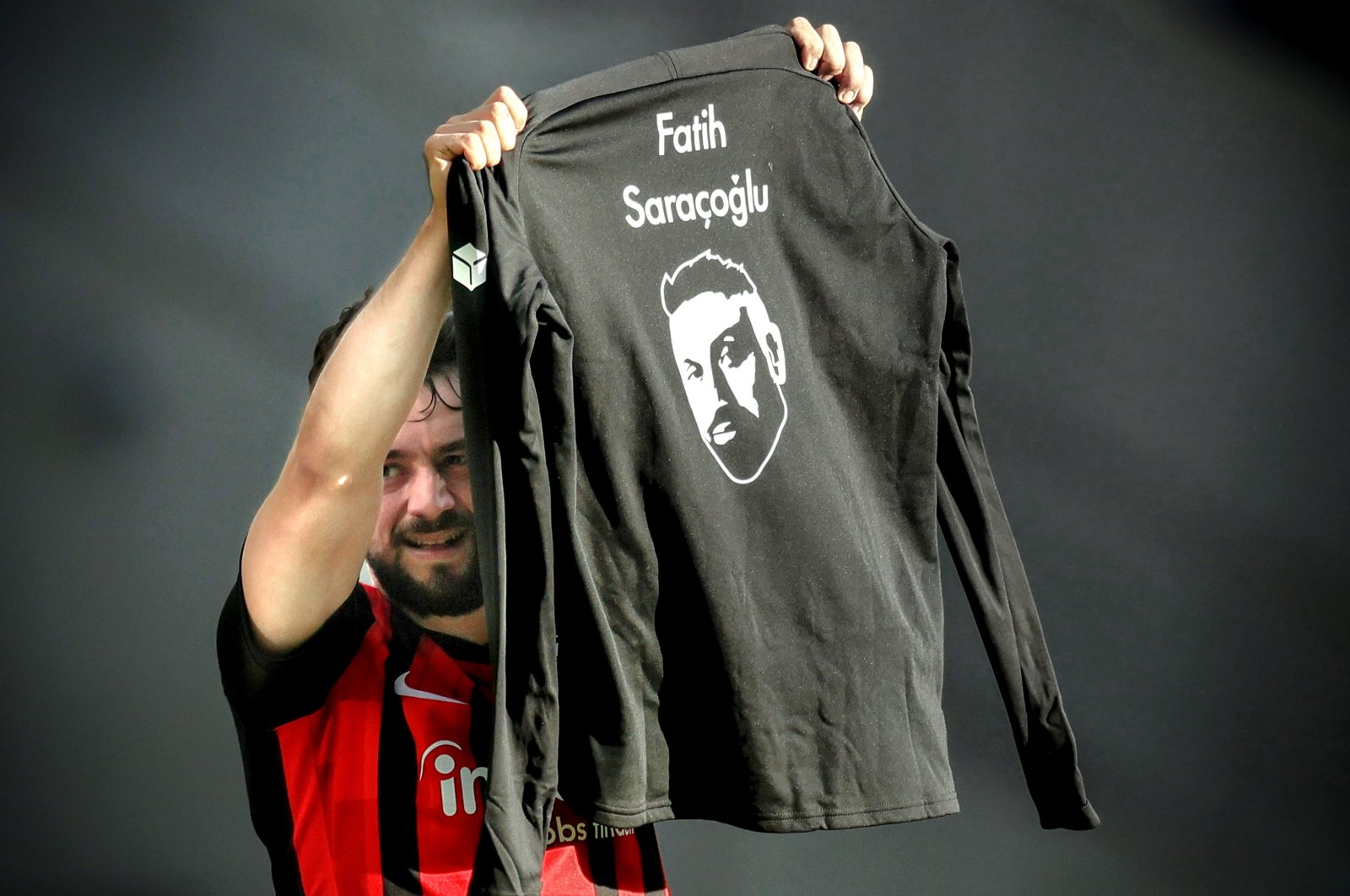 Frankfurt's Amin Younes shows a jersey with the portrait of one of the victims of the Hanau shooting attack on Feb. 19, 2020, celebrating his goal against Bayern Munich, Frankfurt, Germany, Feb. 20, 2021. (EPA Photo)
by ASSOCIATED PRESS Feb 21, 2021 12:23 pm
RECOMMENDED

After scoring the winning goal to help Eintracht Frankfurt beat Bundesliga leader Bayern Munich 2-1 on Saturday, Amin Younes' first thought was for the victims of a racist attack.

The 27-year-old Younes ran straight to the sideline, where he held up a commemorative shirt bearing the name and portrait of Fatih Saraçoğlu, one of nine people with immigrant backgrounds killed in a rampage by a gunman in the nearby town of Hanau just over a year ago.

Frankfurt's players had warmed up for the league game wearing the commemorative tops with "say their names" across the front, and individual victims' names and faces on the back. Ferhat Unvar, Hamza Kurtović, Said Nesar Hashemi, Vili Viorel Păun, Mercedes Kierpacz, Kaloyan Velkov, Sedat Gürbüz, Gökhan Gültekin and Saraçoğlu were all remembered, continuing Friday's commemorations on the anniversary of the killings.

"We wanted to show the faces of the victims. We want to remind people that not forgetting means not letting it happen again," Frankfurt president Peter Fischer told Sky TV before the game. "Opposing racism, hate, anti-Semitism and homophobia is in Eintracht's statutes."

Younes, who troubled Bayern's defense in the first half, was involved in one goal, then scored the other as he helped Frankfurt reinvigorate the title race.

"We didn't learn from the Bielefeld game," Bayern captain Manuel Neuer said, referring to his team coming from two goals down to draw 3-3 in its previous game. "You have to be aggressive from the start."

Leipzig can cut Bayern's lead to two points with a win at Hertha Berlin on Sunday. Frankfurt is level on points with third-place Wolfsburg after maintaining its outstanding start to the year with its eighth win from nine games in 2021.

Frankfurt made a brilliant start with Younes and Filip Kostic combining to set up Daichi Kamada for the opening goal in the 12th minute.

Frankfurt had seven shots compared to Bayern's one before Younes made it 2-0 in the 31st. Kamada played the ball back and Younes unleashed a powerful shot inside the far top corner.

Robert Lewandowski pulled one back in the 53rd to take his season tally to a league-leading 26 goals but missed out on scoring a late equalizer when Lucas Hernández's cross sailed just over his head at the far post in injury time.

Frankfurt was without top-scorer André Silva (18 goals) due to an injury picked up in training, giving Luka Jovic his first start since he returned on loan from Real Madrid.

Bayern also had enforced absences in Thomas Müller and Benjamin Pavard due to the coronavirus, while Corentin Tolisso is out for around three months. Leon Goretzka and Javi Martínez were back among Bayern's substitutes after recovering from their COVID-19 infections. Goretzka came on to help Bayern's improved performance in the second half.

Erling Haaland scored twice as Borussia Dortmund sent rival Schalke another step closer to relegation with a 4-0 win in the Ruhr derby.

Jadon Sancho broke the deadlock in the 42nd, then floated in a cross for Haaland to score with a spectacular scissor kick three minutes later.

Schalke responded with a good start to the second half - American Matthew Hoppe hitting the post - but Raphäel Guerreiro effectively decided the result with a goal on the hour-mark.

Jude Bellingham crossed for Haaland's second in the 79th. It was the Norwegian's 17th goal in 17 Bundesliga appearances this season.

Dortmund players celebrated their third consecutive derby win in front of the empty stand where their supporters would usually sit in non-pandemic times.

Schalke remained last with nine points from 22 rounds, nine points behind Bielefeld in the playoff place with 12 rounds to play. Bielefeld has played a game less.

"I hope they stay in the league," Dortmund defender Emre Can said of Schalke.

It was Gladbach's first game since the club announced that coach Marco Rose will be leaving to join Dortmund next season, and it stretched his team's winless run to three games before it plays Manchester City in the Champions League on Wednesday.

Union Berlin won 1-0 in Freiburg to move ahead of Gladbach on goal difference.

Marcus Ingvartsen crossed for Grischa Prömel to head Union's winner in the 64th.

Saša Kalajdžić also headed Stuttgart to a 1-0 win at Cologne.