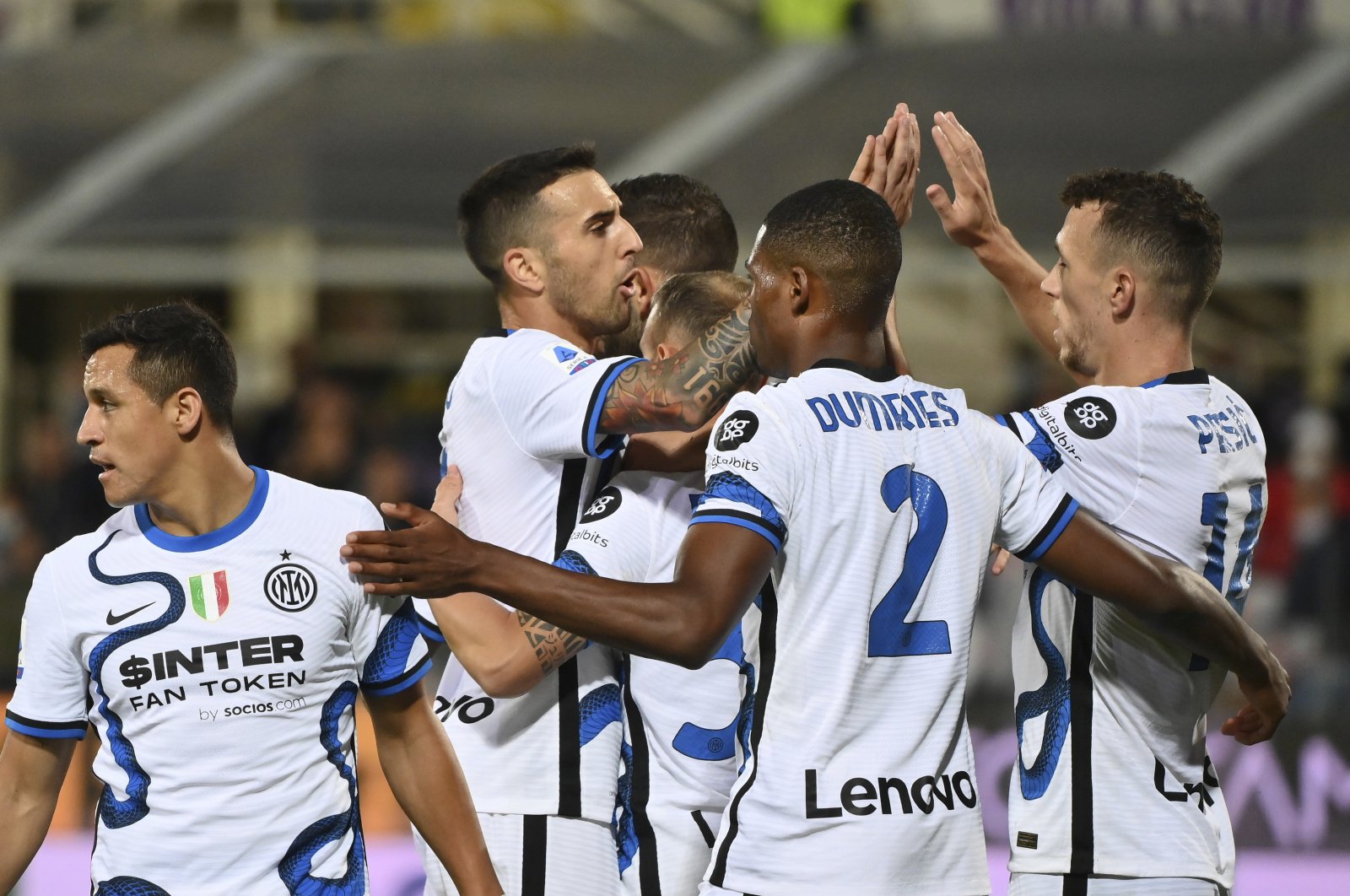 Serie A holder Inter Milan reaffirmed its title defense credentials as it came back from a goal down to beat Fiorentina 3-1 to go top of the league on Tuesday.

Simone Inzaghi's side came away from an intense match against a revitalized Viola in Florence with all three points thanks to two quickfire strikes early in the second half from Matteo Darmian and Edin Dzeko and Ivan Perisic's tap-in late on.

That completed a turnaround after the break as Inter was deservedly losing at half-time through Riccardo Sottil's opener for Fiorentina, who had come into the game in form but fell to a painful second defeat of the season.

Champion Inter is unbeaten in its first five games and sits first with 13 points, one ahead of Napoli who is at Sampdoria on Thursday looking to maintain its 100% start to the campaign.

"This win today was one of a really good team because we're a really good team. We definitely struggled in the first half and thank goodness it was only 1-0 at halftime," said Dzeko to DAZN after scoring his fourth goal for Inter since moving from Roma in the summer.

"In the second half we were more solid and we scored those two goals which changed the match."

A further two points back are local rivals AC Milan and Atalanta, who won a frenetic match with Sassuolo 2-1 thanks to goals in the first half from Robin Gosens and Davide Zappacosta and take on Inter at the San Siro on Saturday.

Vincenzo Italiano's Fiorentina, who finished the game with 10 men after Nicolas Gonzalez was sent off with 11 minutes remaining following two yellow cards in quick succession for dissent, sits sixth on nine points alongside Roma.

"I think we need to look at this as a glass half full because for 60 minutes we were as good as the champions of Italy and we had enough chances to go two ahead," said Italiano to DAZN.

"But when you don't take advantage they have too much strength, quality and solidity to not come back at you."

The win for Inter against an intense Fiorentina side was a warning to Serie A's contenders that it has every intention of going the long haul in the title race despite losing key players in the summer.

It was on the ropes at the start with Samir Handanovic twice denying Dusan Vlahovic and Alfred Duncan clipping the crossbar from a distance before Sottil opened the scoring midway through the first half.

However, it came out after the break with a different attitude, and with 10 minutes of the restart it was ahead, Darmian first rifling home the leveler before Dzeko leaped highest to head the away side in front from Hakan Çalhanoğlu's corner.

From then on Inter was the better team and once Gonzalez daftly got himself red-carded there was only going to be one winner, Perisic's easy finish from a Roberto Gagliardini pass was merely the cherry on the cake for Inzaghi's men.

Earlier, Genoa escaped Bologna with a 2-2 draw thanks to a late Domenico Criscito penalty which came almost straight after the hosts thought they had won with a spot-kick of its own.

Criscito slotted home the leveler in the 89th minute after Kevin Bonifazi was penalized for knocking over Yayah Kallon when it looked as though he himself had been pushed.

Bologna coach Sinisa Mihajlovic was sent off amid fierce protests over what he later called a "non-existent penalty" from the home side, who was trying to bounce back from a 6-1 demolition at the hands of Inter at the weekend.

He had thought his team was destined to win when Marko Arnautovic slammed home his penalty five minutes from the end, which came after Aaron Hickey's drilled opener for the hosts early in the second half and Genoa forward Mattia Destro's equalizer in the 55th minute.

Bologna is seventh on eight points while Genoa sits 14th on four points.