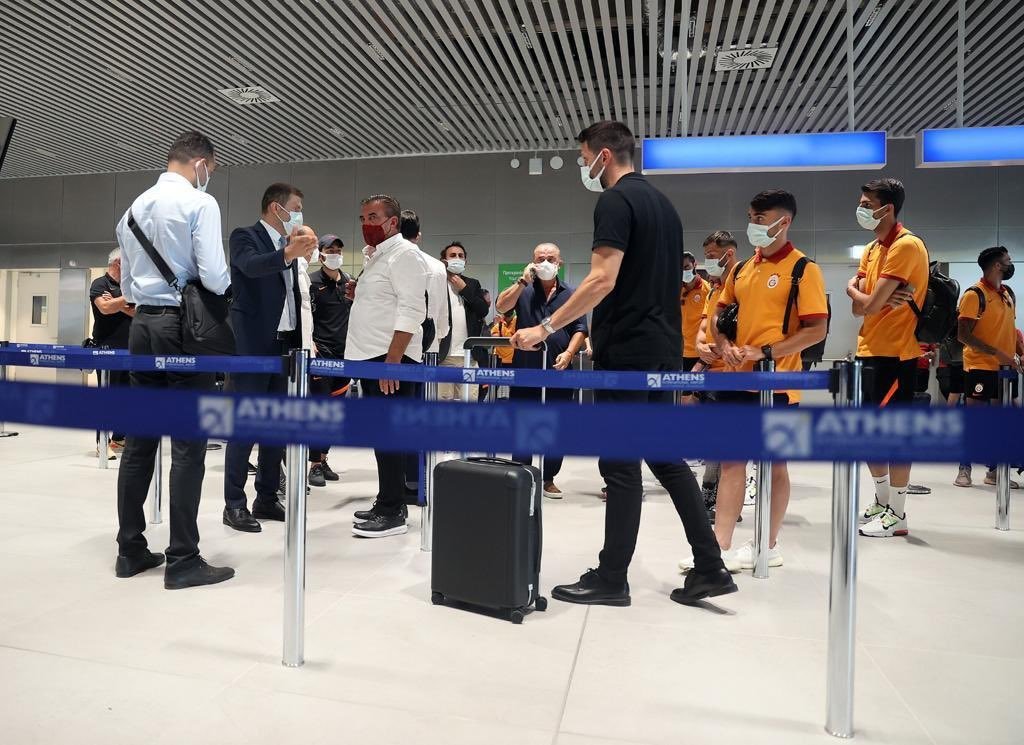 Galatasaray squad is seen waiting at the Athens International Airport in this photo taken on July 12 (Photo taken from Twitter / Galatasaray)
by Daily Sabah with Agencies Jul 12, 2021 8:05 pm
RECOMMENDED

Galatasaray's squad decided to return to Turkey late Monday after Greek customs officials rejected their PCR tests in a move blasted by the Lions as "impertinent" in a statement.

Earlier in the day, the team flew to Athens for an exhibition match against Olympiacos.

The club also issued a statement on the incident.

“As we thoroughly brought what the Greek officials demanded beforehand (such as PCR tests done in last 72 hours, rapid antigen tests done in last 48 hours and vaccine certificates), some people among our group passed through,” the club said.

“Later on, one of the Greek officials said that they do not accept our PCR tests and we need to get re-tested in an impertinent attitude, even though there is a mutual recognition protocol on PCR tests between Turkey and Greece,” the Yellow-Reds added.

“Our squad began the procedures to return to Istanbul after all efforts failed,” the club further stated, adding that the team was made to wait over two hours.

"Galatasaray, the club that carries the Turkish flag on its jersey with great pride and has represented Turkey in Europe many times, has been disrespected like this for the first time. We expect an apology on our country's behalf from Greek officials for their treatment that was against human rights."

Speaking during a live broadcast on the Istanbul giant's official channel Galatasaray TV, club reporter Deniz Gülen said that Greek officials did not even provide water for the squad.

"Greek officials refused to let the Galatasaray squad use lounge facilities, did not even give us water," he said.

"After the Turkish ambassador's intervention, they provided us water following over a two-hour wait," the reporter added.

"I had talks with club President Burak Elmas and coach Fatih Terim and let them know that they have our support," he said.

"I condemn this crude attitude that Galatasaray was subjected to."

Çavuşoğlu said on social media that "malignant and unsportsmanlike treatment that Galatasaray faced in Greece cannot be accepted. We always stand by all of our teams!"

The TFF also released a similar message on its website, saying Greek officials' behavior in Athens "was uncalled for considering Galatasaray fulfilled all the (health) procedures that were requested."

The TFF also strongly criticized the Greek authorities for their behavior that damages the spirit of sports.