Iraq's 'stadium of horrors' in ruins, but beautiful game goes on 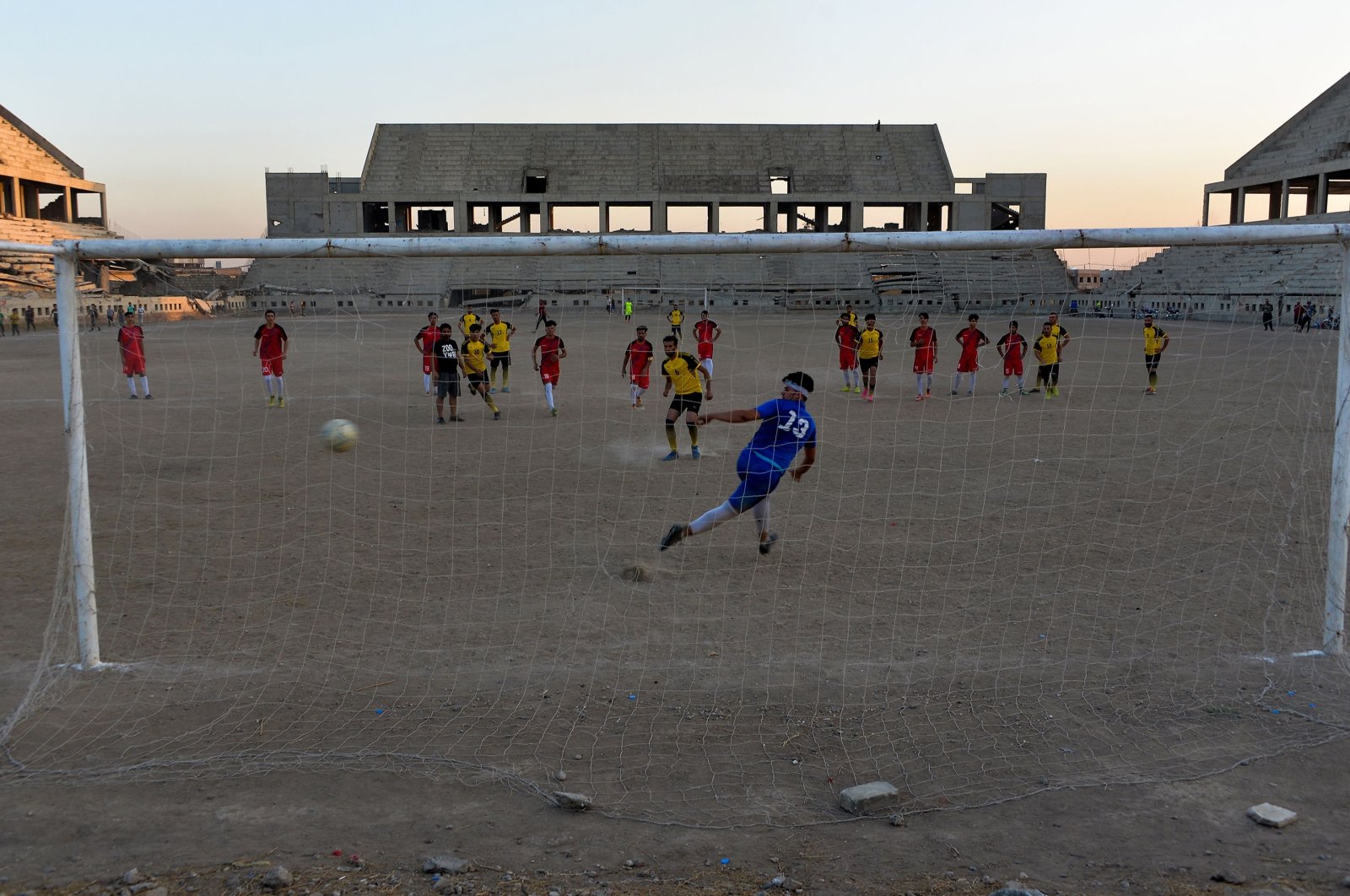 Mohamed Fathi, coach of Mosul's football club in northern Iraq, hardly recognizes the ruined football stadium Daesh terrorists once used as a location to fire rockets and lob mortars from.

Piles of rubble lie alongside a pitch of bumpy sand. The high concrete stadium tiers surrounding it, with its seats torn out, looks dangerously close to collapse. "After this was destroyed, there's no other stadiums in the city to play football," Fathi said, waving his hand at the crumbling building. "The impact of the destruction is enough to tell you everything that happened here."

Daesh seized Mosul in 2014. In 2017, Iraqi and coalition forces pushed the hardened insurgents out in a grinding urban battle that left the ancient city in ruins. The bullet-riddled 20,000-seater stadium, home to Mosul Sports Cub, was not spared as it was caught up in the deadly battles for control. Two other smaller stadiums in town were also damaged.

"Sadly the central government doesn't realize that football is what brings life back to a town, its people and its youth," Fathi said. "So things have stayed the same." Mosul Sports Club was once a solid performing club that produced some of the country's best players. They include Hawar Mulla Mohammed, who led Iraq to its historic 2007 Asian Cup championship, and who played professionally in Europe. Decades earlier, Iraq's national squad made its only World Cup appearance in Mexico in 1986. Mosul's own son, skilled midfielder Haris Mohammed, ably led his country to the rare international honor.

Founded in 1947, Mosul SC played 18 seasons in Iraq's premier league, before its relegation to the first division a decade ago. With thousands of roaring fans passionately backing their team, locals dubbed it the "stadium of horrors" for visiting teams. That ominous label, however, would take on a more sinister meaning with the arrival of Daesh terrorists.

"I used to follow soccer matches here, and suddenly out of nowhere convoys of (Daesh) militants decked out with guns would show up," recounted Omar al-Mosuli, a resident in his thirties. "It was a frightening scene, and I used to walk away quietly."

Daesh's austere and terror-ridden reign was marked by beheadings and shootings. Like so many other facets of daily life, football changed. Soccer disappeared as a professional pursuit and violence became an established pastime instead. "Under the stands, (Daesh) fighters transformed the space into a massive weapons depot," Mosuli said. "They set up launchpads inside the stadium to fire rockets during the battle to liberate the city."

Amid Mosul's disfigured landscape, its committed players still train on the stadium's dusty pitch a couple of times a week. There are no other suitable fields to play on. "We are forced to train here now," Fathi, the coach, explained. "The club's president and some of the staff even pay for the equipment out of their own pocket," he added.

The lack of a proper place play for the team, however, is also a reflection of the rampant corruption Iraq struggles with.

The country is consistently ranked as one of the worst performers on Transparency International's Corruption Perceptions Index. "A foreign aid agency started reconstructing Mosul SC stadium, but the province's sports authority reassigned the site two years ago to a businessman," Mosul-based sports journalist Talal al-Ameri told Agence France-Presse (AFP). The businessman sat on the project, a common occurrence in Iraq. When a respected former captain of the Iraqi national squad became sports minister, Adnan Darjal, he reviewed the file. "Due to corruption allegations, the new minister has suspended everything," Ameri added.

The lack of a stadium has not deterred Maytham Younis, the 34-year-old coach of the aptly-named amateur team al-Mustaqbal, or "The Future".

He urges his young players to train hard, as they practice in a dusty field in Mosul's al-Bakr neighborhood in front of a small but loyal following of fans. It is a far cry from the cheering thousands who once watched in Mosul's centerpiece stadium, but it is the best they can do as they wait for football to flourish again. For now, hopes of a return to the glory days the club has seen remain a dream. "We have plenty of talent," Younis said. "But without a stadium, it's hard for them to get noticed."