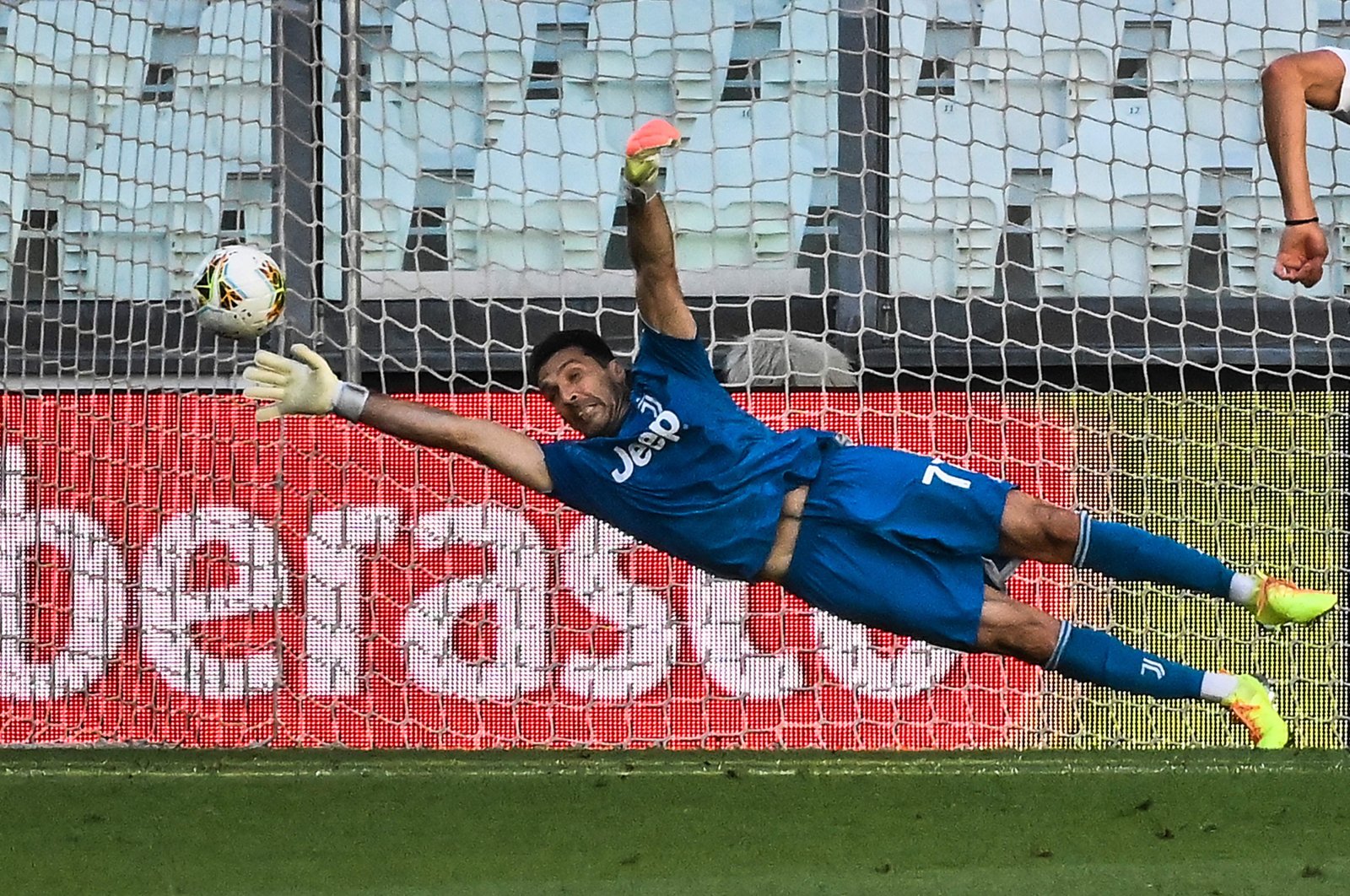 Juventus goalie Gianluigi Buffon makes a save during the Serie A football match between Juventus and Torino, at the Allianz Stadium in Turin, Italy, Saturday, July 4, 2020. (AFP Photo)
by ASSOCIATED PRESS Jul 04, 2020 8:31 pm
RECOMMENDED

Cristiano Ronaldo finally scored with a free kick in the Italian league to help Juventus beat Torino 4-1 on Saturday in a match which also saw Gianluigi Buffon set the Serie A appearance record.

It was the 46th club goal Ronaldo had scored in his career direct from a free kick but his first in nearly two seasons with Juventus.

Paulo Dybala and Juan Cuadrado had scored in the first half before Andrea Belotti's penalty kick reduced the deficit. Torino defender Koffi Djidji netted an own-goal late on.

The Turin derby was Buffon’s 648th appearance in Italy’s top flight, moving the 42-year-old keeper one ahead of AC Milan great Paolo Maldini, who set the record in 2009. Buffon matched this record on Dec. 18 against Sampdoria.

Buffon only had a couple of saves to make before being faced with a penalty in first-half stoppage time after Matthijs de Ligt was somewhat harshly judged to have handled the ball.

Buffon got a hand to Belotti’s penalty.

It was Buffon’s 915th club match as a professional, extending his record for an Italian player.

The vast majority of those matches have come for Juventus. Buffon joined the Bianconeri in 2001 after starting his career with Parma and swiftly established himself as one of the best goalkeepers in the world.

He was expected to retire at the end of the 2017-18 season but instead made a surprise move to Paris Saint-Germain, where he won the French league to add to his multiple titles. He caused even more of a stir when he rejoined Juventus the following year.

Buffon recently extended his contract for another season.

He could add to his impressive medal collection with a 10th Serie A title with Juventus. Two other titles were stripped from the club due to the Calciopoli scandal. Also as punishment, Juventus was relegated to Serie B but Buffon stayed and helped it win the second division and bounce straight back up.

Buffon made 176 appearances for Italy – a European record – and was voted Serie A’s goalkeeper of the year 12 times.

One of the few trophies missing from Buffon’s glittering collection is the Champions League. He lost three finals in that competition with Juventus.