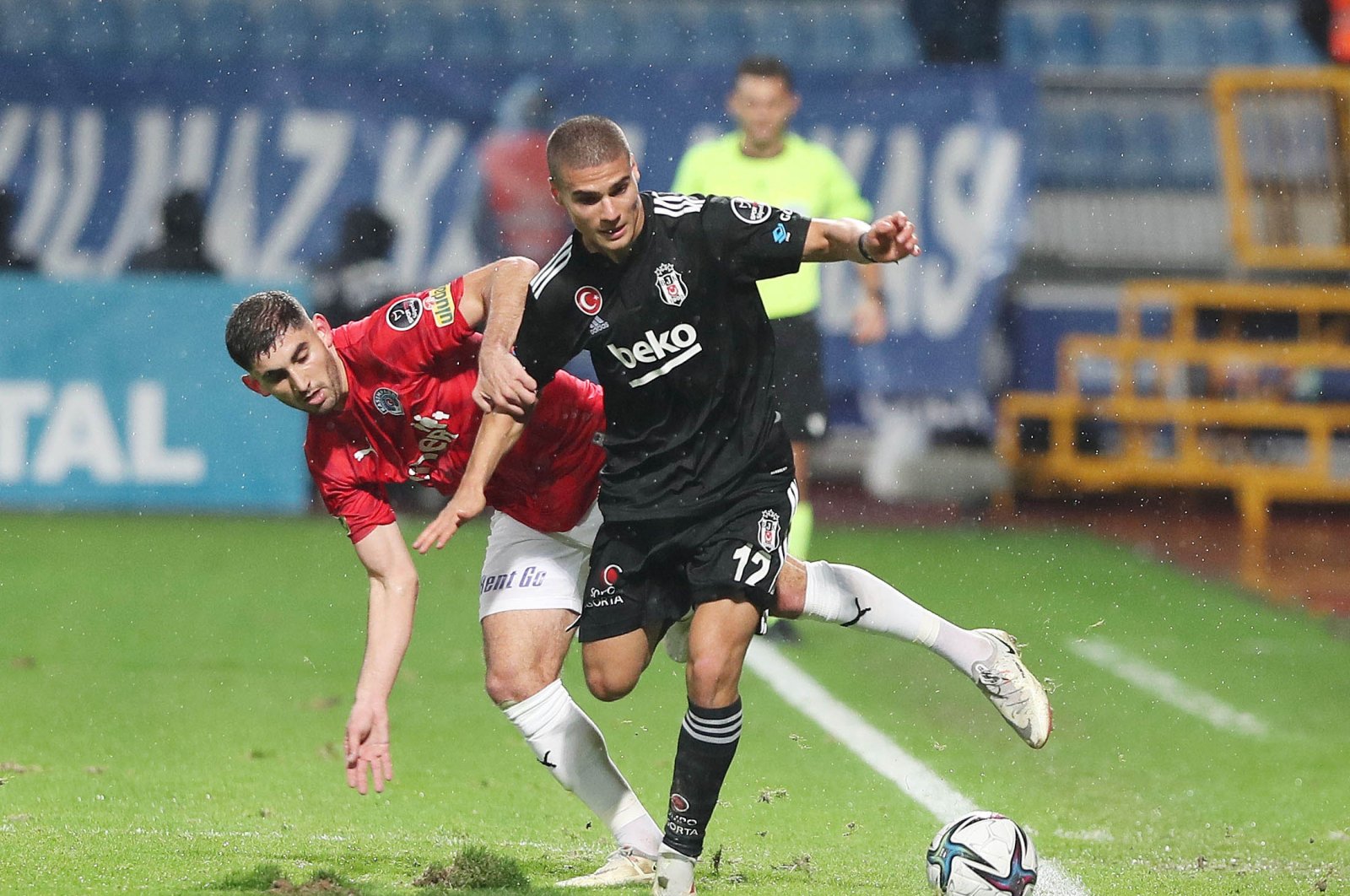 Struggling Süper Lig champion Beşiktaş was held to a 1-1 draw by lowly Kasımpaşa at Recep Tayyip Erdoğan Stadium in Istanbul on Friday.

The black and whites took the lead with a goal by Can Bozdoğan in the 12th minute. Umut Bozok equalized in the 82nd-minute for Kasımpaşa, and the match ended with this score.

In the 8th minute, Cyle Larin, who lurked behind the defense with Rachid Ghezzal's long pass, took his shot facing the goalkeeper Harun Tekin. Bruma sent the ball past Harun for a corner.

Beşiktaş took the lead in the 12th minute. Can Bozdoğan put pressure on the ball after making an erroneous pass and won back the ball. Can's hard shot from outside the penalty area from a point facing the goal hit the post and met the net to make it 0-1.

After Rıdvan's mistake in the 30th minute, Yusuf Erdoğan took control of the ball and entered the penalty area from the right diagonal. The ball went sideways when Yusuf tried his luck with his left foot.

In the 32nd minute, Larin overtook the long ball from the defense. Batshuayi sent the ball into the net against the goalkeeper Harun and entered the net, but was found to be offside.

The first half of the match ended 1-0 to Beşiktaş's advantage.

Bozok, who hung behind the defense with Eysseric's pass in the 49th minute, shot at goal but goalkeeper Ersin took ownership of the ball.

In the 54th minute, Batshuayi, who also was lurking behind the defense with Ghezzal's pass, shot the ball from a narrow angle but slapped the ball into the corner.

Ghezzal, who passed his opponents in front of the penalty area in the 56th minute, saw Larin on the left diagonal, who sent the ball over the top of the goal.

In the 68th minute, the ball fell in front of Wellington on the back post in the corner used by Ghezzal from the right. But the Kasımpaşa defense took the ball off the line.

In the 73rd minute, Kasımpaşa was awarded a free kick from a point facing the goal. Ersin wanted to control the ball that Eysseric sent directly to the goal. The ball ricocheted from Ersin, returned from the post, and then the young goalkeeper sent the ball to the corner.

Can Bozdoğan, who met the ball outside the penalty area with Atiba's pass in the 80th minute, dribbled into the penalty area. But goalkeeper Harun did not allow a goal when Bozdoğan shot just behind the penalty mark and Kasimpasa's defense cleared the ball.

Eren Elmalı, who was behind the defense from the left wing with Donk's pass in the 82nd minute, centered from the ground. Just in front of the 6-yard box, the ball by Umut Bozok went into the net: 1-1.

There was no other goal in the match and Beşiktaş drew 1-1 with Kasımpaşa away.

Beşiktaş's Wellington, who started the Kasımpaşa match with a yellow card penalty, was suspended due to a second yellow card in the 89th minute.

Bozok, who caught the ball after Wellinton's pass in the 89th minute of the match, was again dropped by Wellington on the left diagonal.

Referee Mete Kalkavan showed the Brazilian defender a yellow card after this position.

Wellington, who started the match close to the yellow card limit, was subsequently suspended with this yellow card. The experienced defender will not play in the forthcoming match with Yukatel Kayserispor in the 16th week of the Süper Lig.

Kevin N'Koudou, who was injured for the black and whites in extra time, left the field on a stretcher. N'Koudou, who was substituted for Larin in the 67th minute of the match, left the game on a stretcher as a result of the injury he suffered in the 90+5th minute. The status of the 26-year-old football player will be determined after examinations.

Good news for Beşiktaş from UEFA

UEFA has lifted its decision to confiscate 15% of Beşiktaş's revenue it receives from UEFA organizations in the 2021-2022 season.

In the statement made on the official website of UEFA, it was reported that the decision to confiscate 15% of the income from UEFA organizations for the black and whites in the 2020-2021 season was lifted by the UEFA Club Financial Control Authority, as the club no longer has an overdue debt.