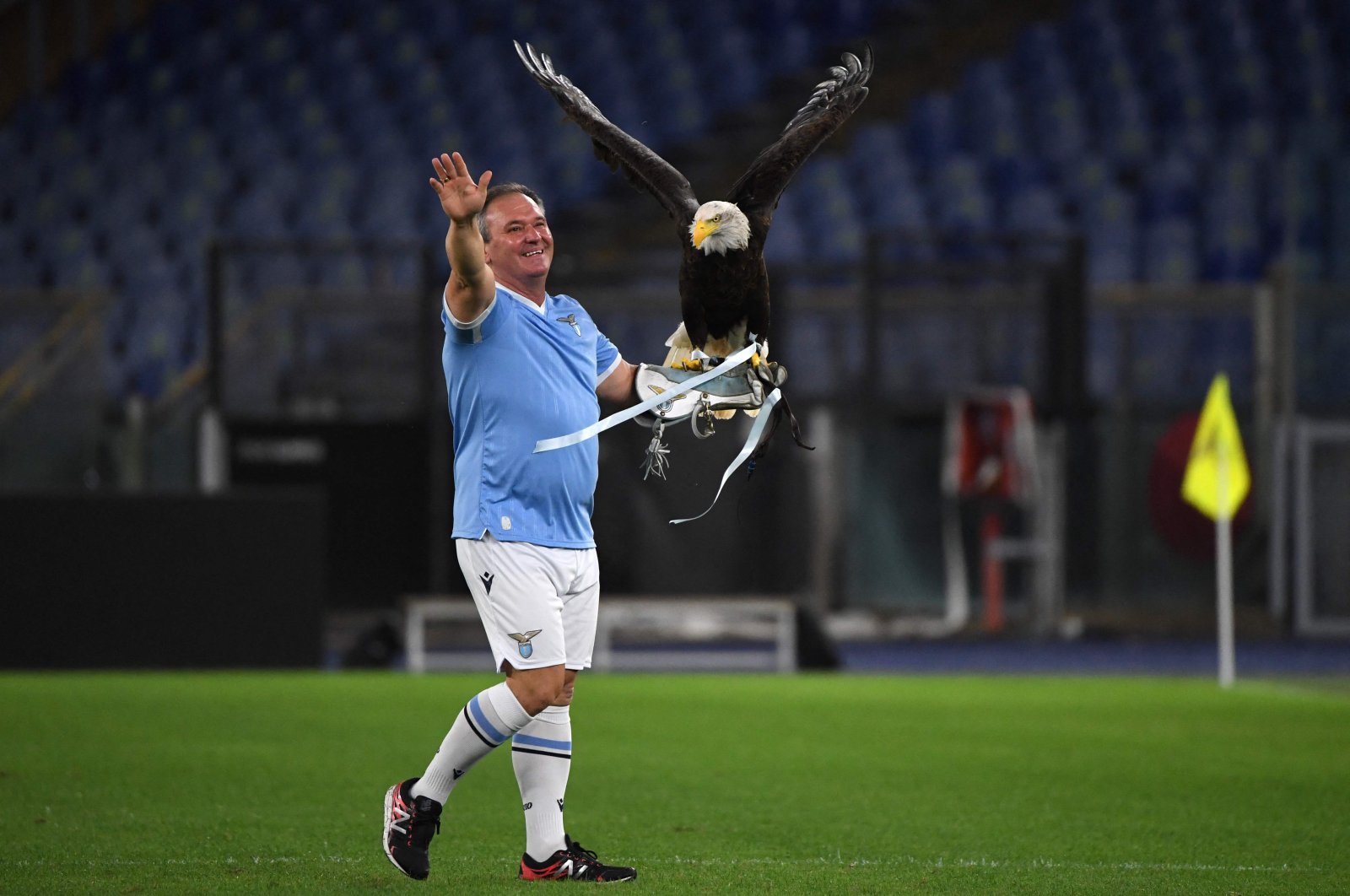 A falconer holds Lazio's mascot eagle "Olimpia" after it flew over the stadium prior to the UEFA Europa League Group E football match between Lazio Rome and Lokomotiv Moscow on Sept. 30, 2021, at the Olympic stadium in Rome. (AFP Photo)
by French Press Agency - AFP Oct 21, 2021 6:11 pm
RECOMMENDED

Serie A's Lazio, a club with a long history of racist, xenophobic and pro-fascist incidents, is in hot waters once more after the handler of its eagle mascot praised dictators Benito Mussolini and Francisco Franco.

The handler, however, has been suspended by the club for performing a fascist salute at the end of last weekend's win over Inter Milan.

Juan Bernabe was filmed by fans at Rome's Stadio Olimpico making the gesture and chanting "Duce, Duce" while holding the eagle Olimpia and dressed in full Lazio kit in the aftermath of the 3-1 triumph over Italian champions Inter, earning fierce criticism from the Union of Jewish Communities in Italy.

On Wednesday Lazio said that Bernabe – employed by an outside company – would be suspended but in an interview with Rome-based daily Il Messaggero the Spaniard said he didn't understand "why this provoked so much chaos," claiming he thought he was performing a "military salute."

"I was born in the army, I come from a right-wing culture, I'm a supporter of (Spanish far-right party) Vox like many footballer friends of mine and I'm proud of it," the paper quoted him as saying.

He confirmed that he had performed the chants in favor of Mussolini, who founded the National Fascist Party and ruled Italy from 1922 to 1943 before being killed near Lake Como by Italian partisans in 1945.

"I did it and I don't regret it because I admire Mussolini, he did great things for Italy as Franco did for Spain. I admire both of them and I'm proud of it."

Far-right fan groups are common across Italy but Lazio's hardcore supporters have a connection to the extreme right that stretches back to at least the 1970s.

Its historic ultras group, the "Irriducibili," had friendly relations with its counterparts at Inter, who also have some of the country's most notorious far-right supporters.

The group's leader Fabrizio Piscitelli, nicknamed "Diabolik" after an Italian graphic novel character, was shot dead two years ago in a Rome park.