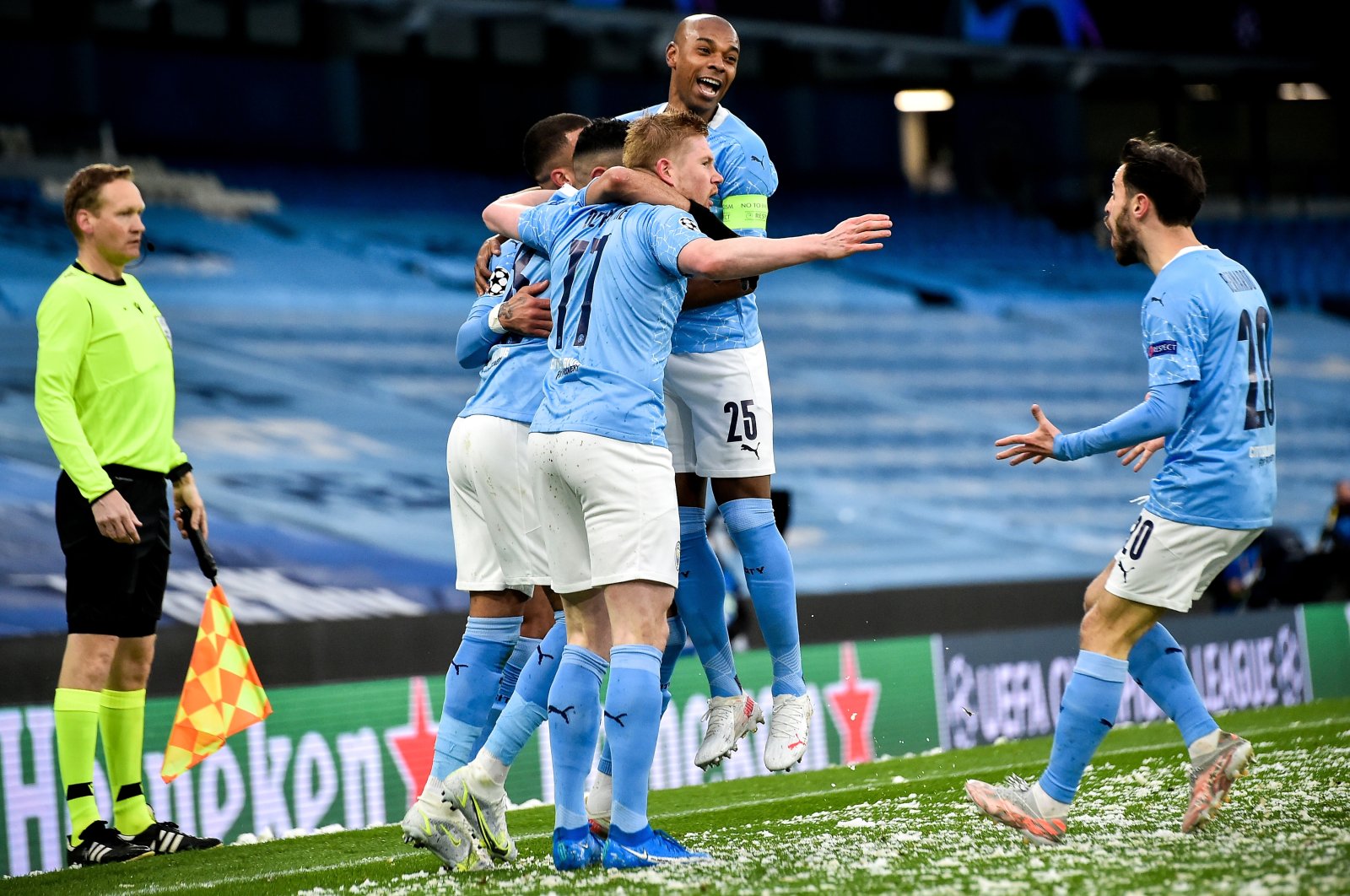 Manchester City's Fernandinho (C) and his teammates celebrate their team's 1-0 lead during the UEFA Champions League semi final, second leg soccer match between Manchester City and Paris Saint-Germain in Manchester, Britain, 04 May 2021. (EPA Photo)
by Reuters May 05, 2021 12:30 am
RECOMMENDED

Riyad Mahrez struck twice as Manchester City reached the Champions League final for the first time thanks to a 2-0 victory over Paris St Germain at the Etihad Stadium on Tuesday that secured a 4-1 aggregate win.

City were dominant against their French opponents, who lost their heads in the second half and finished the semi-final, second leg with 10 men after Angel Di Maria was sent off in the 69th minute for an off-the-ball stamp on Fernandinho.

Pep Guardiola's City side will now face the winner of Wednesday's last-four match between Chelsea and Real Madrid in the May 29th final in Istanbul.

Mahrez put City ahead on the night in the 11th minute and then finished off a superb counter-attack in the 63rd to secure their place in the final.

PSG sorely missed their talented striker Kylian Mbappe who, still struggling with a calf injury, was forced to watch the match from the bench.

Guardiola has not reached the Champions League final since his second European title with Barcelona in 2011.

A pre-match hail storm and downpour made for a tricky surface and City had an early scare when Dutch referee Bjorn Kuipers pointed to the spot after PSG appeals for handball.

Yet a VAR review showed that the ball had bounced legally off the top of City fullback Oleksandr Zinchenko's shoulder and the penalty was overturned.

The nerves turned to delight in the 11th minute when Zinchenko raced on to a long ball from keeper Ederson down the left flank, found Kevin De Bruyne inside and the Belgian's blocked shot fell to Mahrez in the box who made no mistake with his finish.

Yet the goal did little to settle City at the back and the visitors could have levelled five minutes later when Marquinhos headed a Di Maria cross against the bar from close range.

City almost self-destructed when Ederson, from the edge of his area, threw the ball out to Bernardo Silva who was robbed by Di Maria, but with the City keeper's goal unguarded, the Argentine failed to find the target.

PSG keeper Keylor Navas did well to keep out a low drive from Mahrez just before the break and the Costa Rican was called on quickly after the restart to deal with a Phil Foden effort from the left.

Without Mbappe, Neymar was rarely a danger, floating deep as he looked for the ball, but he opened up City's defence with a jinking solo run in the 56th minute before his shot from inside the box was blocked by Zinchenko.

City put the tie beyond the French side in the 63rd minute with a classic counter-attack, as Foden burst down the left and, after a quick exchange with De Bruyne, picked out Mahrez at the back post who slotted in from close range.

The frustration spilled over for Mauricio Pochettino's PSG side and Di Maria was sent off after a petulant spat with Fernandinho after the ball had gone out for a throw in.

From then on it was just a question of if City would add to the pain and the impressive Foden went close with a low drive that clipped the post.

Manchester City defeated PSG also in the first leg of the semifinals with a 2-1 comeback.