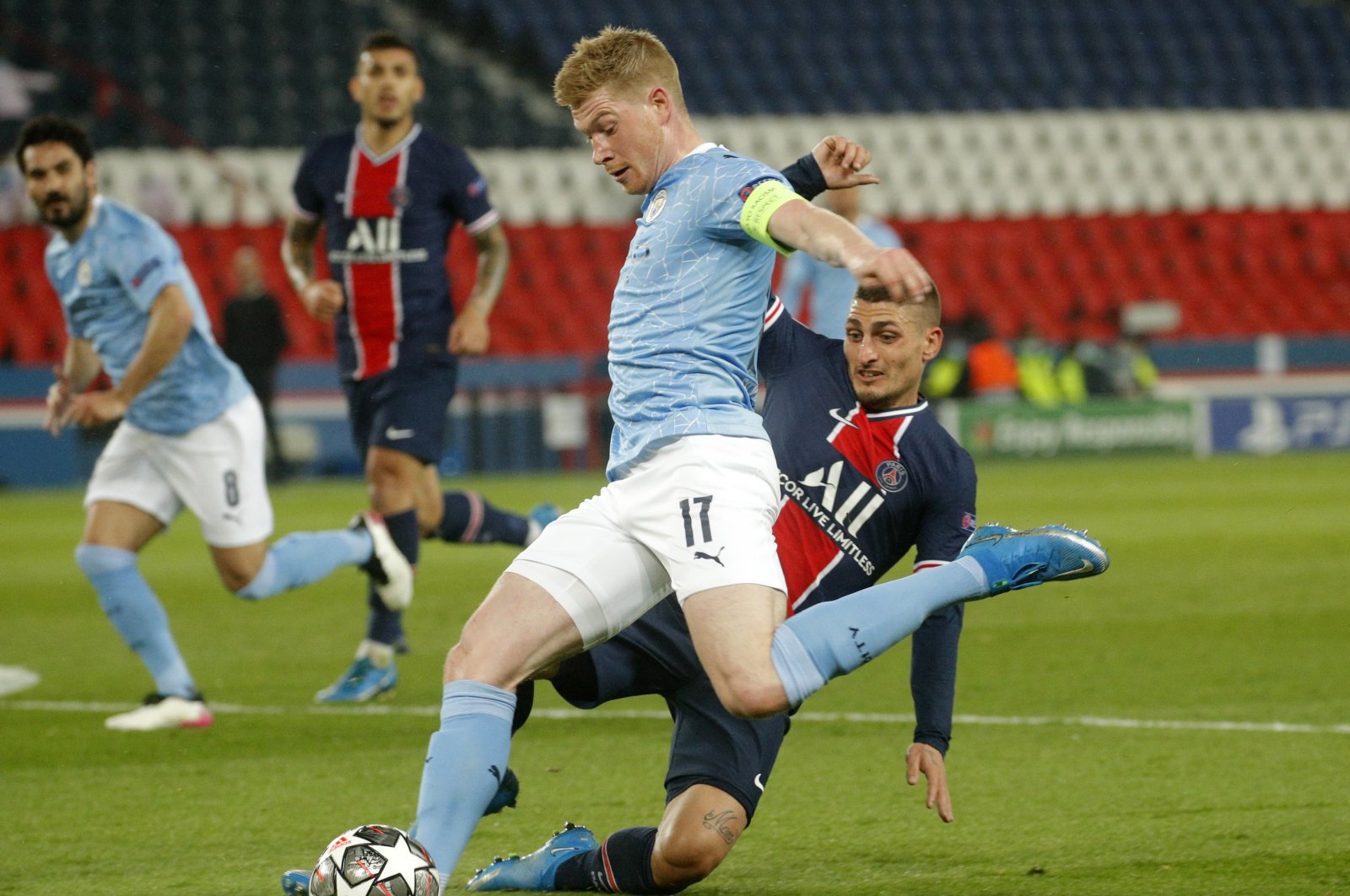 PSG led 1-0 through captain Marquinhos’ early header from a corner, but City skipper Kevin De Bruyne equalized in the 64th minute when goalkeeper Keylor Navas misread his dipping cross and it bounced inside his post.

Riyad Mahrez's free kick – through a wall that jumped early and left an inviting gap for the Algeria winger – put the visitors ahead in the 71st.

“We deserved the lead, but in the second half, they were better than us. Physically they were a little bit more aggressive, it was difficult for us to recover the ball," PSG coach Mauricio Pochettino said. “We’re very disappointed with the two goals. It’s difficult to accept that this happened in the semifinal, it’s really painful."

After City's quick 1-2 punch, PSG’s composure soon crumbled, as has often been the case in recent seasons when under pressure. Pochettino's side finished the game with 10 players as midfielder Idrissa Gueye was shown a red card in the 77th minute for a dangerous tackle on midfielder Ilkay Gündoğan.

City could have taken a bigger lead into the return leg next Tuesday, but winger Phil Foden shot straight at Navas after a brilliant jinking run through PSG's flagging defense.

City coach Pep Guardiola wants his players to stay relaxed for the return leg, rather than thinking about reaching the final for the first time in the club's history.

“All I want is for us to be ourselves in the second leg,” he said. "We are good playing a certain way, we cannot do it differently.”

Chelsea drew 1-1 at Real Madrid in the other semifinal on Tuesday.

City made a bright start, stretching PSG with its quick passing and imposing itself in midfield with some hefty challenges.

But PSG had the first sights on goal and, after Neymar went close, Marquinhos timed his run well to meet Angel Di Maria’s corner near the front post and head in the 15th-minute opener.

It was another important goal from the Brazilian, after netting a last-gasp equalizer in the quarterfinals and then scoring in the semis last season.

Di Maria was causing problems for City’s defense with his runs from the right flank, while both Neymar and Marco Verratti were opening City up with their passing.

With City now playing on the break, Foden wasted a good chance near the break when he shot straight at Navas from just inside the penalty area, after being set up by Bernardo Silva’s pass from the right.

“In the first half we were too rushed," De Bruyne said. "That’s not the way we’re set up as a team.”

PSG threatened early in the second half when Di Maria’s superb pass over the midfield put Kylian Mbappe into space down the right. He twisted inside and out, putting two City defenders on the floor, but his fizzing cross was too strong and eluded his teammates.

De Bruyne set up City’s late winner in the League Cup final last Sunday and again took time to exert his influence after a brief spell out injured. The Belgium star went close with a shot on the turn that went just over on the hour mark.

Four minutes later, he was mobbed by his relieved teammates when his cross was intended for a teammate's head but stunned Navas as it bounced past him.

“It is so hard for the keeper because he always expects someone to touch it,” De Bruyne said.

Then he gave the free kick to Mahrez, who grew up in Sarcelles but is another on a long list of talented local players overlooked by PSG over the years.

“He asked me if he could take it and I said ‘If you believe in yourself take it,’" De Bruyne said. “I have full confidence in all my team.”

He spotted a gap as PSG’s wall jumped too early and inched City closer to its first Champions League final.

Both sides took a knee against racism just before the game.