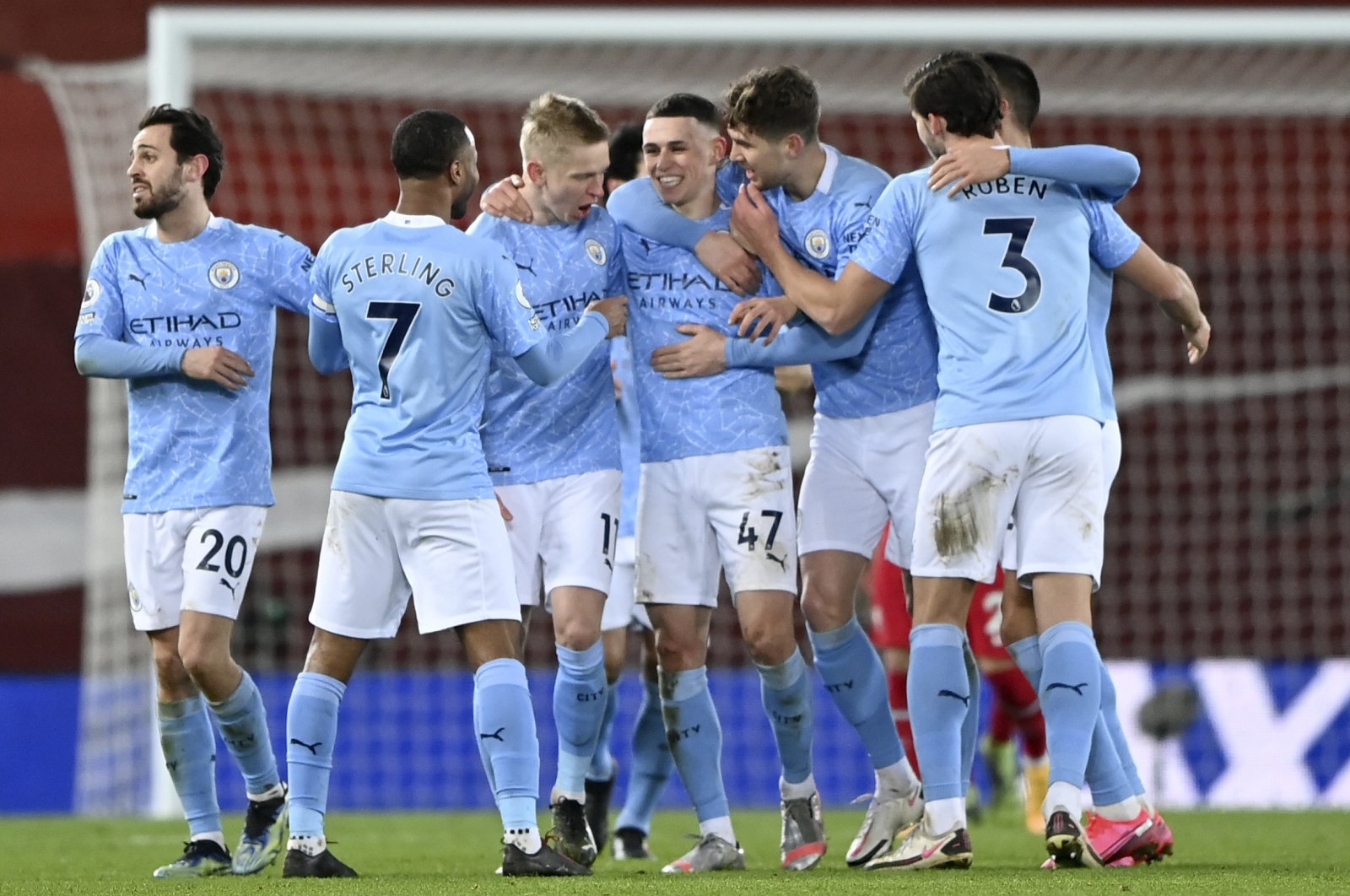 Inspired by Gündoğan's goals and Phil Foden's stylish display, City moved 10 points clear of fourth-placed Liverpool after their first win at Anfield since 2003.

The troubled champions were blown away by Pep Guardiola's side, who became the first team to score four times in a league game at Anfield in 12 years.

City hold a five-point lead over second-placed Manchester United and have a game in hand on their local rivals as they eye a third title in four seasons.

They have won 14 successive games in all competitions to equal the record for an English top-flight club, set by Preston in 1892 and Arsenal in 1987.

Despite the prolonged absences of Kevin De Bruyne and Sergio Aguero, City have shrugged off their slow start to the season and sit in pole position to win the title.

"We have done brilliantly so I cannot deny how happy we are. To come here and finally win, it's very important," Guardiola said.

"I'm so grateful to my players but this is now the past. In February no one is champions."

In stark contrast, Liverpool are in disarray after losing three consecutive home league games for the first time since 1963.

They have won just two of their last nine league matches as injuries and fatigue take their toll.

"We made two massive mistakes, that is clear. There is not a real explanation. Maybe he had cold feet? It sounds funny but it could be," said coach Jurgen Klopp of the two poor clearances from Alisson that led to City goals.

"They used them and 3-1 down in a game like this, when you are that long level, it is tough to take.".

Gündoğan blasted a 38th-minute penalty into the Kop after Fabinho's trip on Raheem Sterling.

But the Germany midfielder got back in Guardiola's good books in the 49th minute after Sterling's incisive run unhinged the Liverpool defense.

Sterling found Foden inside the Liverpool area and when his low shot was parried by Alisson, Gündoğan was on hand to thump home from close-range.

Liverpool were gifted a penalty in the 63rd minute after City defender Ruben Dias allowed Mohamed Salah to latch onto Trent Alexander-Arnold's long pass and responded by pulling him down.

Salah took the penalty himself, showing Gündoğan how to do it as he shot high into the net for his 22nd goal this season.

Alisson made an even bigger mistake than Dias in the 73rd minute when the Liverpool keeper's sloppy pass was intercepted by Foden.

Foden made a superb run through the heart of the Liverpool defense before cutting back for Gündoğan to finish from virtually on the line.

Alisson's nightmare wasn't over and in the 76th minute he again conceded possession with a woeful pass.

This time, Bernardo Silva was the beneficiary and he chipped a cross to Sterling, who headed into the empty net.

England midfielder Foden capped the rout in the 83rd minute, cut in from the right to blast past the shell-shocked Alisson.

Kane back in style

Jose Mourinho admitted Tottenham "depend" on Kane after the Tottenham striker delivered a dominant display on his return from injury.

Mourinho's side had lost their previous three Premier League games to put their top four hopes in peril.

Revitalized by Kane's earlier than expected return from an ankle problem suffered against Liverpool, Tottenham got back to winning ways just when the under-fire Mourinho needed it most.

Kane had missed the last two games, but he made up for lost time by opening the scoring in the second half at the Tottenham Hotspur Stadium.

Kane's 20th goal in all competitions this season took him to 208 goals in 317 Tottenham appearances – level in joint second place alongside Bobby Smith in the club's all-time scoring list.

The England captain's milestone goal was followed by a Son Heung-min strike moments later to kill off West Brom.

Leicester remain third after a 0-0 draw at Wolves.