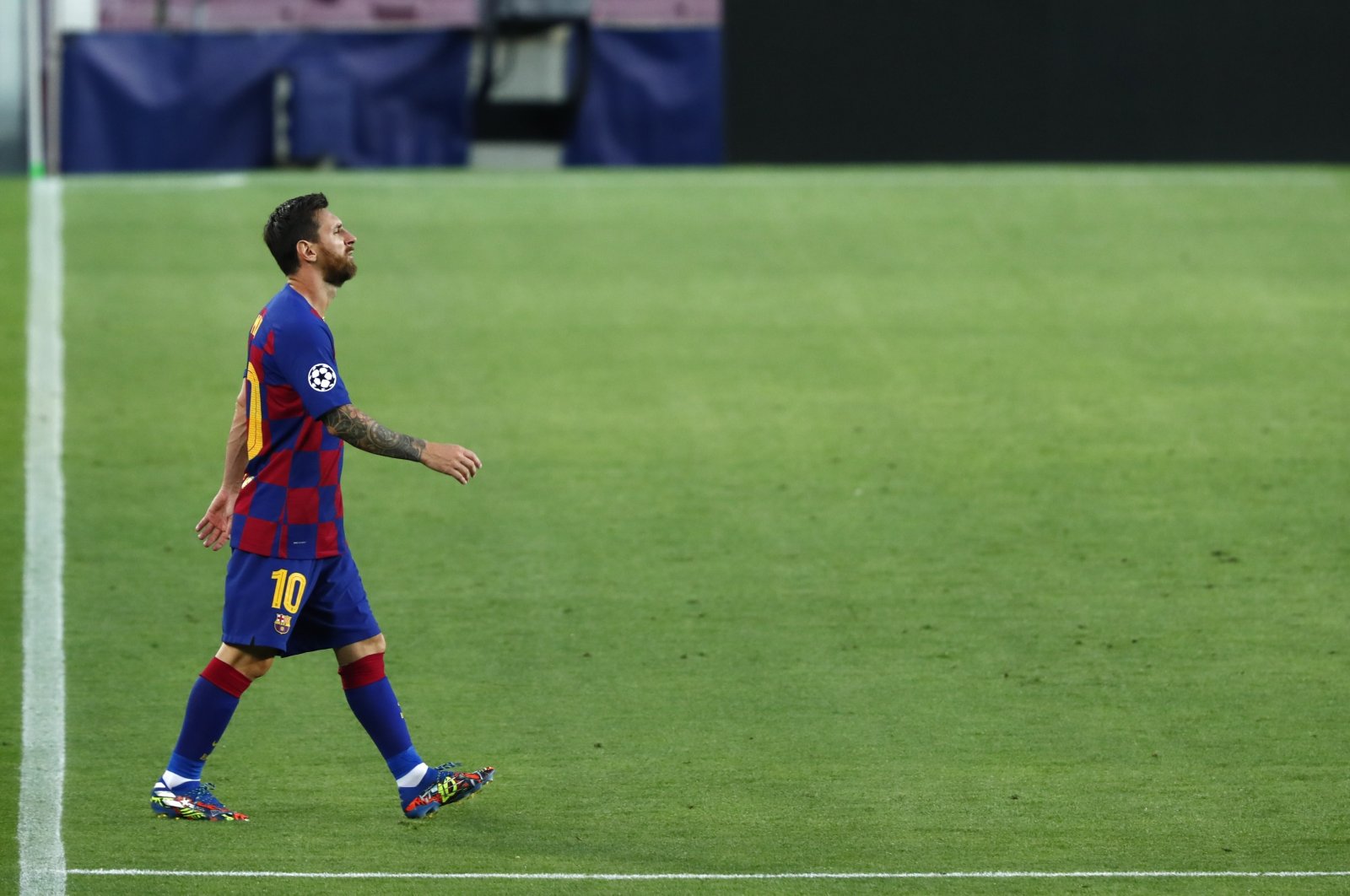 Barcelona's Lionel Messi walks on the field for the Champions League round of 16, second leg football match between Barcelona and Napoli at the Camp Nou Stadium in Barcelona, Spain, Saturday, Aug. 8, 2020. (AP Photo)
by ASSOCIATED PRESS Sep 05, 2020 9:10 am
RECOMMENDED

Lionel Messi made it clear that it was time to move on, seek new challenges and be happy somewhere other than Barcelona.

He had won dozens of titles and broken numerous records with the Catalan club but didn't like the direction it was going, so the time had come to try and succeed somewhere else.

But despite being promised that he could leave, he wasn't allowed to. So he is staying for another year to avoid a lengthy legal battle with “the club of his life.”

Putting an end to uncertainty about his future, Messi announced Friday that he will continue with Barcelona for the upcoming season despite having wanted to leave.

Messi made the announcement in a video interview published by Goal.com. He said he wanted “to seek a new direction” in his career but didn't want to fight with the club.

He made it clear that he wasn't happy with club president Josep Bartomeu, saying the club official didn't keep his word to let him leave for free at the end of the season.

Messi officially told Barcelona 10 days ago about his decision, but Barcelona said it wanted him to finish his contract that runs until June 2021. It claimed that the clause invoked by Messi to leave had expired on June 10 and said that he had to pay a buyout clause of 700 million euros ($837 million) if he wanted to depart now.

Messi had told the club about his intention to leave by sending a burofax, a certified document similar to a telegram.

“The burofax was simply to make it official that he was not following the rules, not to get into a fight because I did not want to fight with the club," Messi said.

There had been no agreement when Messi’s father and Bartomeu met on Wednesday to discuss the player’s future.

“I’ll continue at Barcelona and my attitude won't change, no matter how much I have wanted to go,” Messi said. “I told the club and the president that I wanted to go. I’ve been telling him all year. I thought my time in Barcelona was over, sadly — I always wanted to finish my career here."

Messi had not made any public statements since the team's 8-2 loss to Bayern Munich in the quarterfinals of the Champions League on Aug. 14. He said the defeat, one of the worst in his career, was not what made him decide to leave.

“It was a very difficult year, I suffered a lot in training, in games and in the dressing room,” Messi said. "I wanted a winning project and to win titles with the club to continue expanding the legend of Barcelona. The truth is that there has been no project or anything for a long time, they juggle and cover holes as things go by.”

Still, Messi said it wasn't easy to decide to leave the club.

“When I communicated my wish to leave to my wife and children, it was a brutal drama,” he said. "The whole family began crying, my children did not want to leave Barcelona, ​​nor did they want to change schools.”

Messi's announcement came a few hours after his father had sent a letter to the Spanish league saying his son felt that he was free to leave Barcelona immediately without having to pay the 700 million euro buyout clause. The league contested saying he was under contract and could not leave without the clause being paid.

Messi's decision to stay came as a huge relief for Barcelona, which is still mired in crisis three weeks after the devastating loss to Bayern. Bartomeu and incoming coach Ronald Koeman had said the team’s restructuring project revolved around the Argentine forward, so convincing him to stay was key to helping lift the club out of one of its worst crises ever.

The club will start its season against Villarreal in the Spanish league at the end of the month. The squad had been training without Messi since Monday.

“What I can say is that I’m staying and I’m going to give my best for Barcelona,” Messi said. “No matter what, my love for Barça will never change.”