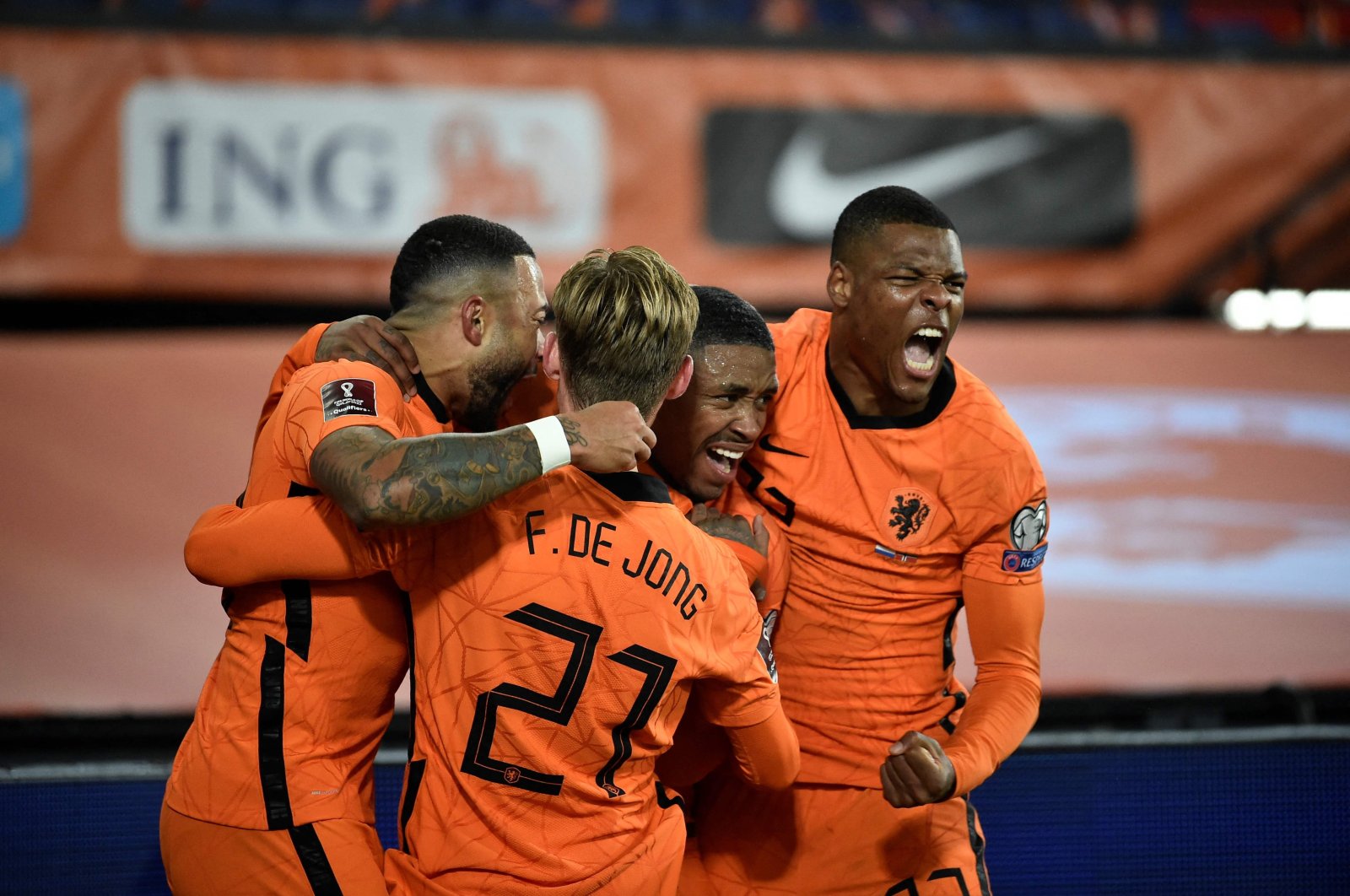 Netherlands' forward Steven Bergwijn (C) celebrates with teammates after scoring his team's first goal during the FIFA World Cup Qatar 2022 qualifying round Group G football match between Netherlands and Norway at the Feijenoord stadium in Rotterdam on Nov.16, 2021. (AFP Photo)
by Agencies Nov 17, 2021 12:41 am
RECOMMENDED

The Netherlands beat Norway as late goals from Steven Bergwijn and Memphis Depay sealed a 2-0 win over Norway on Tuesday.

The Dutch, with injured coach Louis van Gaal watching from the stands in Rotterdam, only needed a point to top Group G and came through a nervy encounter to finish two points clear of second-placed Turkey, who pipped Norway to a play-off spot.

Steven Bergwijn finally broke the stalemate in a cagey match in the 84th minute, running onto a pass by Arnaut Danjuma and smashing a powerful shot past Orjan Nyland.

In stoppage time, the Tottenham winger surged forward and laid off a pass for Memphis Depay to seal the victory with a shot from a tight angle.

Norway, needing a win to stand a chance of progressing, showed little initiative throughout the match.

The Dutch were minutes from qualifying on Saturday night, leading Montenegro 2-0 in the last 10 minutes of regulation time before conceding twice to set up Tuesday’s nerve-jangling match.

This time it was the Dutch who scored twice late on, leaving Norway no time to come back.

Dutch coach Louis van Gaal watched the match from a sky box at the stadium after breaking a bone in his hip in a fall on Sunday, passing messages to his assistants Henk Fraser and Danny Blind in the dugout.

Star striker Erling Haaland was also out injured and without him Norway largely lacked attacking impulse and did not manage a single shot in the first half.

The Dutch pushed forward and Depay looked the most likely to break the deadlock before the break but could not find a way past Nyland.

The Netherlands controlled most for the match and Bergwijn’s strike and Depay’s extra time goal were enough to send the three-time World Cup runner-up to Qatar after failing to qualify for the 2018 tournament in Russia.