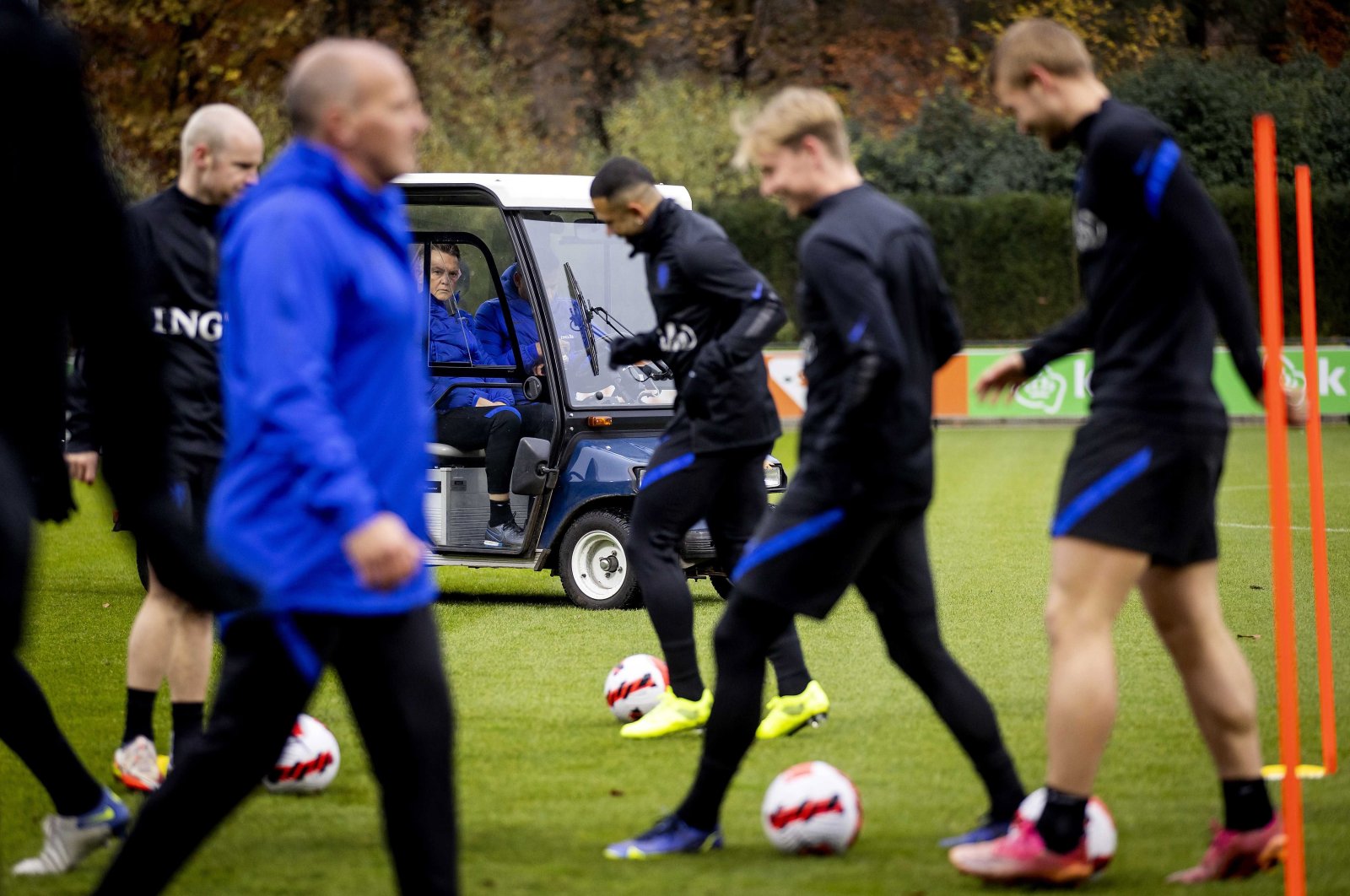 National coach Louis van Gaal (back) sits in a cart during a training session of the Dutch national team at the KNVB Campus in Zeist, the Netherlands, Nov. 15, 2021. (EPA Photo)
by Agencies Nov 15, 2021 7:09 pm
RECOMMENDED

The Netherlands has been left with an unexpected injury to contend with ahead of the team's crucial World Cup qualifying match against Norway: Coach Louis van Gaal hurt his hip when he fell off his bicycle and had to be driven to training Monday in a golf cart.

The 70-year-old coach, who was cycling near the team hotel when he fell and was taken to hospital for tests on Sunday, said he can still do his job.

During the training session, Van Gaal remained seated in the cart and gave instructions to one of his assistants, Danny Blind, who passed them on to the players.

The coach also was unable to attend Monday's pre-match press conference in person but made an appearance via video link, sitting in a wheelchair.

“Physically, (I’m) not good, but the brain is still working,” Van Gaal said, adding he was in “a lot of pain. That's why I am sitting in a wheelchair.”

“I can still do everything and have done all the preparation that I normally would have.”

Netherlands captain Virgil van Dijk, who did appear at the press conference, said the incident was “definitely a shock.”

“We are happy that he can lead us and it hasn’t impacted much in terms of the preparation. This morning he chaired an important meeting and still guides us. Van Gaal is still keen to make it to the World Cup.”

Van Gaal said that he would be on the bench on Tuesday and expected the Dutch to win the game and secure the top spot in their group.

The Netherlands blew a two-goal lead against Montenegro on Saturday in a 2-2 draw when victory would have guaranteed qualification for the World Cup in Qatar.

The Netherlands has a far superior goal difference over Turkey and Norway, which are two points behind the Dutch. A draw on Tuesday in Rotterdam should be enough to ensure the team advances to next year's tournament.

Central defender Stefan de Vrij left the Dutch training camp Sunday with an injury he picked up against Montenegro and will not be available for Tuesday's game.

The match will be played at an empty Kuip Stadium in Rotterdam because of lockdown measures that came into force over the weekend amid soaring COVID-19 infections in the Netherlands.

Van Gaal said staff at the stadium are looking into how to get him to the dugout for the match.