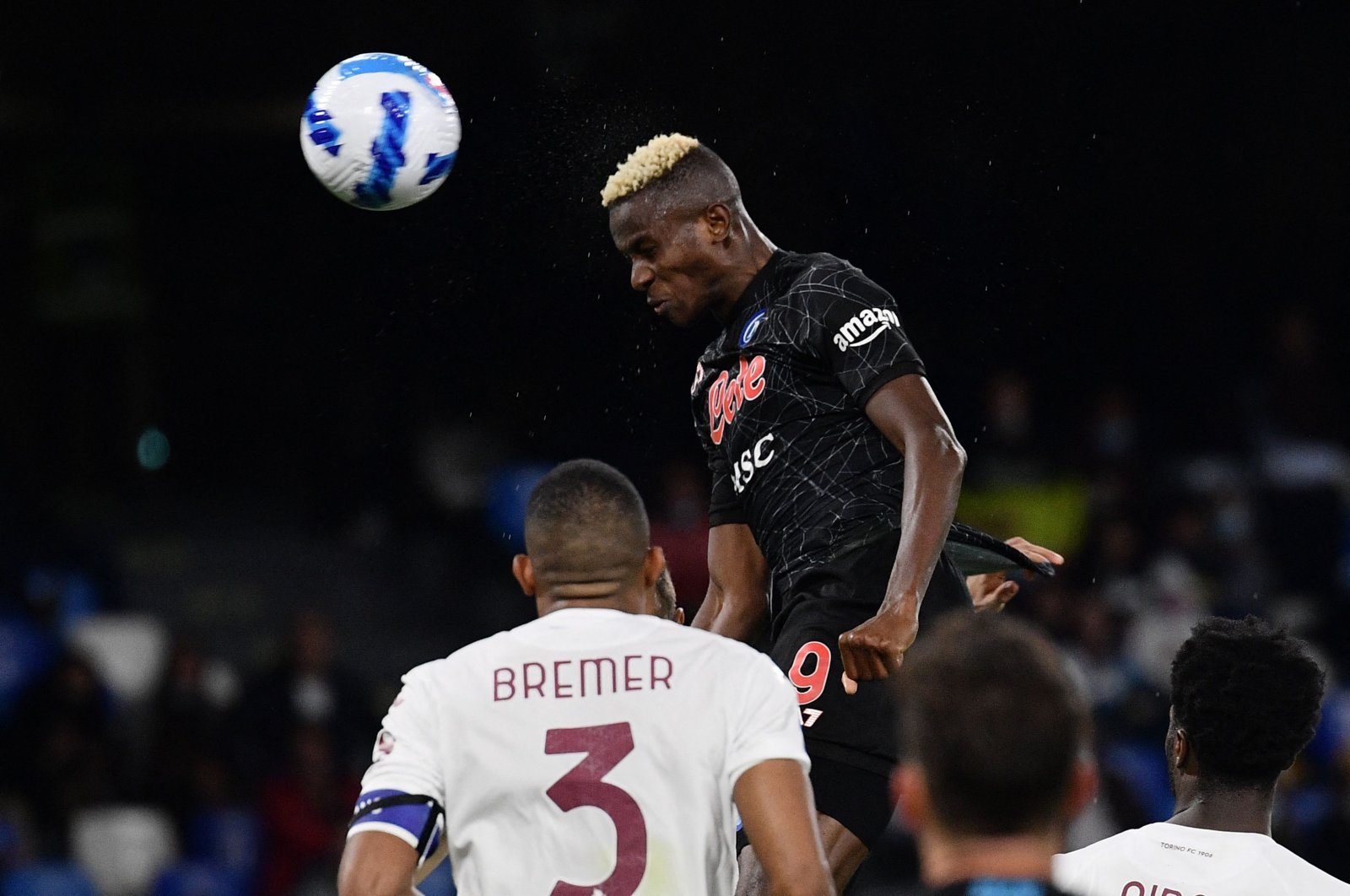 Napoli's Nigerian forward Victor Osimhen scores a header during a Serie A match against Torino at the Diego-Maradona stadium in Naples, Italy, Oct. 17, 2021. (AFP Photo)
by French Press Agency - AFP Oct 18, 2021 9:45 am
RECOMMENDED

The win helped Napoli reclaim the top spot in Italy and further extend its perfect start to the Serie A season, with eight wins in eight outings.

AC Milan had moved to the top of the table after battling back from two goals down to beat Hellas Verona 3-2 at the San Siro earlier Saturday.

But Napoli moved back to the summit after Osimhen, who had scored for his country in a 2-0 win against the Central African Republic in World Cup qualifying last week, headed the 81st-minute winner.

Lorenzo Insigne's weak first-half penalty was saved and Mexico international Hirving Lozano hit the post before Osimhen made the most of an attempted clearance that ricocheted off teammate Eljif Elmas.

"It was the most important goal of my career," said Osimhen.

"I'm so pleased. The atmosphere at the stadium was incredible. The fans pushed us forward and we managed to get the three points.

"We never gave up, we attacked until the end and deserved the win. I saw the ball fly up and I thought I could get there before the defenders. I connected well and scored such an important goal for me and the team," he added.

Napoli has 24 points, two more than AC Milan, after equalling the best start in club history, having also won its first eight games in 2017-18.

Reigning champion Inter Milan is on 17 points after losing ground following a 3-1 defeat away to Lazio on Saturday.

Wojciech Szczesny saved a penalty from Roma midfielder Jordan Veretout just before half-time as Juventus made it four wins on the bounce, moving up to seventh.

Roma remains fourth but has lost three of its past five outings.

"I like 1-0, as it's a good result, especially as we kept another clean sheet," Juve coach Massimiliano Allegri told DAZN.

"Roma are a technically good team, they have a lot of quality and caused us problems early on, then we scored a good goal and improved as time wore on."

Atalanta was an easy 4-1 winner against Empoli on Sunday as it warmed up to take on Manchester United at Old Trafford in the Champions League on Wednesday.

Veteran Slovenian forward Josip Ilicic, recalled to the team after suffering from a combination of a knee injury and severe depression, scored the opener and his first goal of the season when he was well served by Joakim Maehle on 10 minutes.

Ilicic, 33, got his second with a rasping shot on 26 minutes but Federico Di Francesco pulled a goal back for the home side.

Four minutes into the second half, Atalanta took a 3-1 lead when 19-year-old Empoli defender Mattia Viti scored an own goal before the visitor wrapped up the win when Colombian forward Duvan Zapata got his 100th Serie A goal.

The team from Bergamo now head to northwest England to face United, who was beaten 4-2 at Leicester on Saturday, in Champions League Group F.