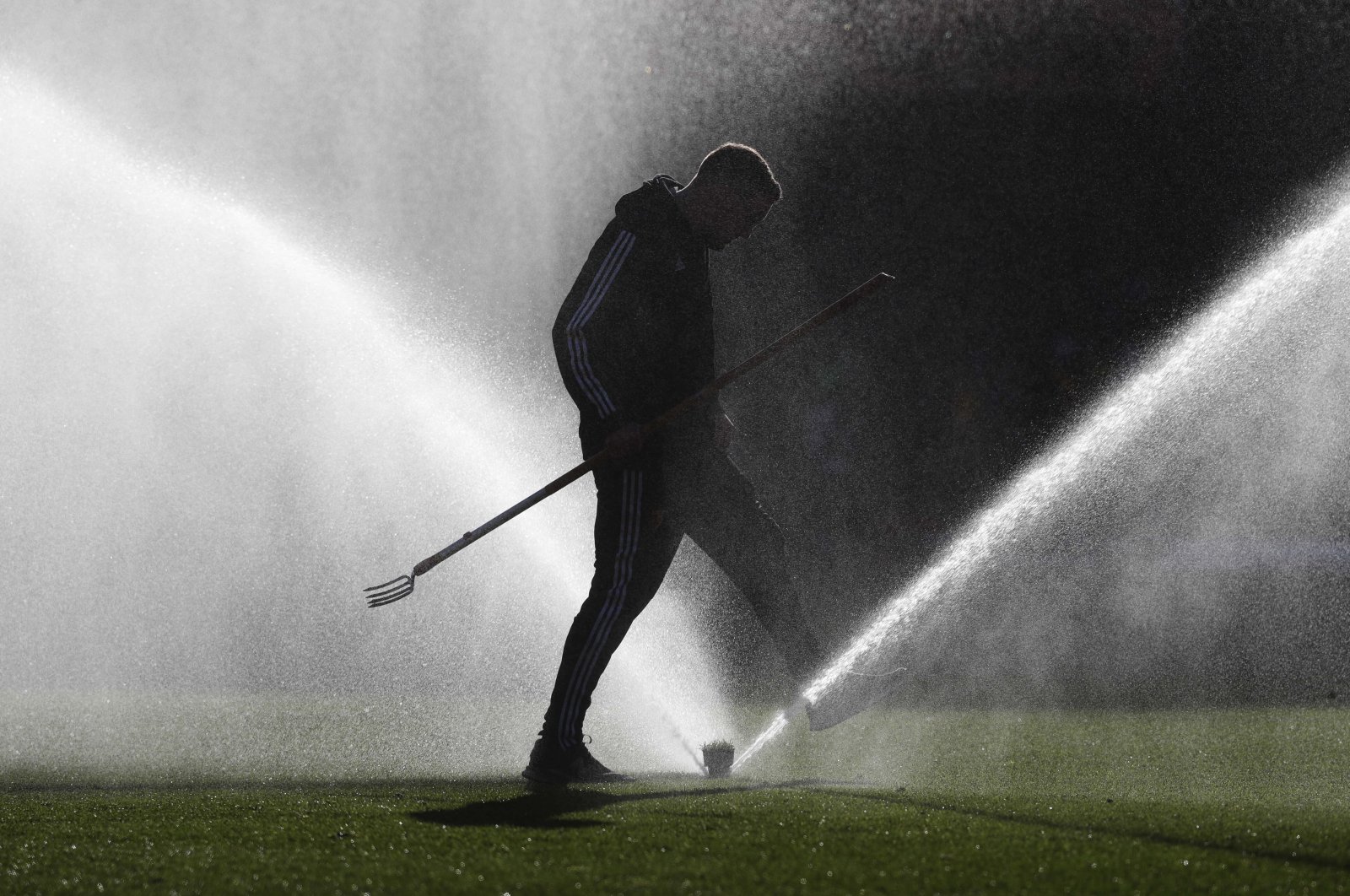 A field worker walks through a spray of water on the pitch prior to the start of the Premier League football match between Watford and Tottenham Hotspur at Vicarage Road, Watford, England, Jan. 18, 2020. (AP Photo)
by French Press Agency - AFP Apr 02, 2020 9:28 am

Players and clubs in the Premier League drew the ire of the football world over their reluctance to share the financial burden of the coronavirus crisis, as several British teams announced plans to use government-offered funds to pay staff

Premier League clubs have been accused of living in a "moral vacuum," with players urged to take their share of the financial hit from the coronavirus pandemic as non-playing staff begin to feel the pinch.

Last year's Champions League finalist Tottenham, as well as Newcastle and Norwich, has faced a backlash for using the British government's furlough scheme, which will guarantee 80% of employees' income up to a maximum of 2,500 pounds (TL 20,690) a month.

"It sticks in the throat," said lawmaker Julian Knight, who chairs the Commons Digital, Culture, Media and Sport Committee, referring to the use of public funds to prop up wage bills.

"This exposes the crazy economics in English football and the moral vacuum at its center," he said.

That 2,500-pound sum would be a drop in the ocean for many Premier League stars, yet there has so far been no agreement on wage cuts or deferrals for players, unlike the situation at other top European clubs such as Juventus and Barcelona.

Tottenham chairman Daniel Levy said he hoped discussions between the Premier League and players' and managers' representatives would "result in players and coaches doing their bit for the football eco-system."

However, a joint meeting between the Premier League, English Football League, Professional Footballers' Association and League Managers Association on Wednesday failed to reach an agreement.

"No decisions were taken today, with discussions set to continue in the next 48 hours with a focus on several high-profile matters, including player wages and the resumption of the 2019/20 season," the four bodies said in a joint statement.

Levy is in the firing line himself despite taking a 20% cut in salary for the next two months.

On Tuesday he announced a 20% cut for 550 non-playing staff on the same day it was revealed he was paid 7 million pounds last season, including a 3 million-pound bonus for the completion of the club's new stadium, which ran well over time and budget.

Players at Barcelona have taken a 70% pay cut during Spain's state of emergency and will make additional contributions to ensure other employees receive full wages.

The squad of Italian champions Juventus, including Cristiano Ronaldo, have agreed to have their wages stopped for four months while players at German giants Bayern Munich accepted a 20% pay cut.

"Where the players have the means and they step forward I think that shows very much that they understand what is happening right now and frankly we will be seeing more of that," said FIFPro general secretary Jonas Baer-Hoffmann.

Bournemouth manager Eddie Howe became the most prominent Premier League figure so far to take what the Cherries described as a "significant" pay cut on Wednesday.

He said: "Highly paid football players are people who can carry the greatest burden and they should be the first one to, with respect, sacrifice their salary, rather than the person selling the program or the person who does catering."

However, players can argue the spotlight is being unfairly shone on them to foot the bill rather than the billionaire owners of clubs.

"I think the football industry is being used as a lightning rod by politicians," football finance expert Kieran Maguire told Agence France-Presse (AFP).

According to the Sunday Times rich list, Tottenham owner Joe Lewis, who resides in the Bahamas, saw his wealth surge to 4.4 billion pounds last year.

"Joe Lewis himself is worth over 4 billion pounds and we are having a go at Harry Kane who is a guy with a career that is going to end at 35," added Maguire.

Players do not want to be the fall guys in a crisis only for clubs to behave irresponsibly when their income returns.

"It's ridiculous to have clubs deferring their obligations to players and then making big-money transfer signings," said PFA chief executive Gordon Taylor.

Yet, transfers are far from the minds of most executives just trying to ensure their clubs are still standing in a few months' time.

"When I read or hear stories about player transfers this summer like nothing has happened, people need to wake up to the enormity of what is happening around us," added Levy.