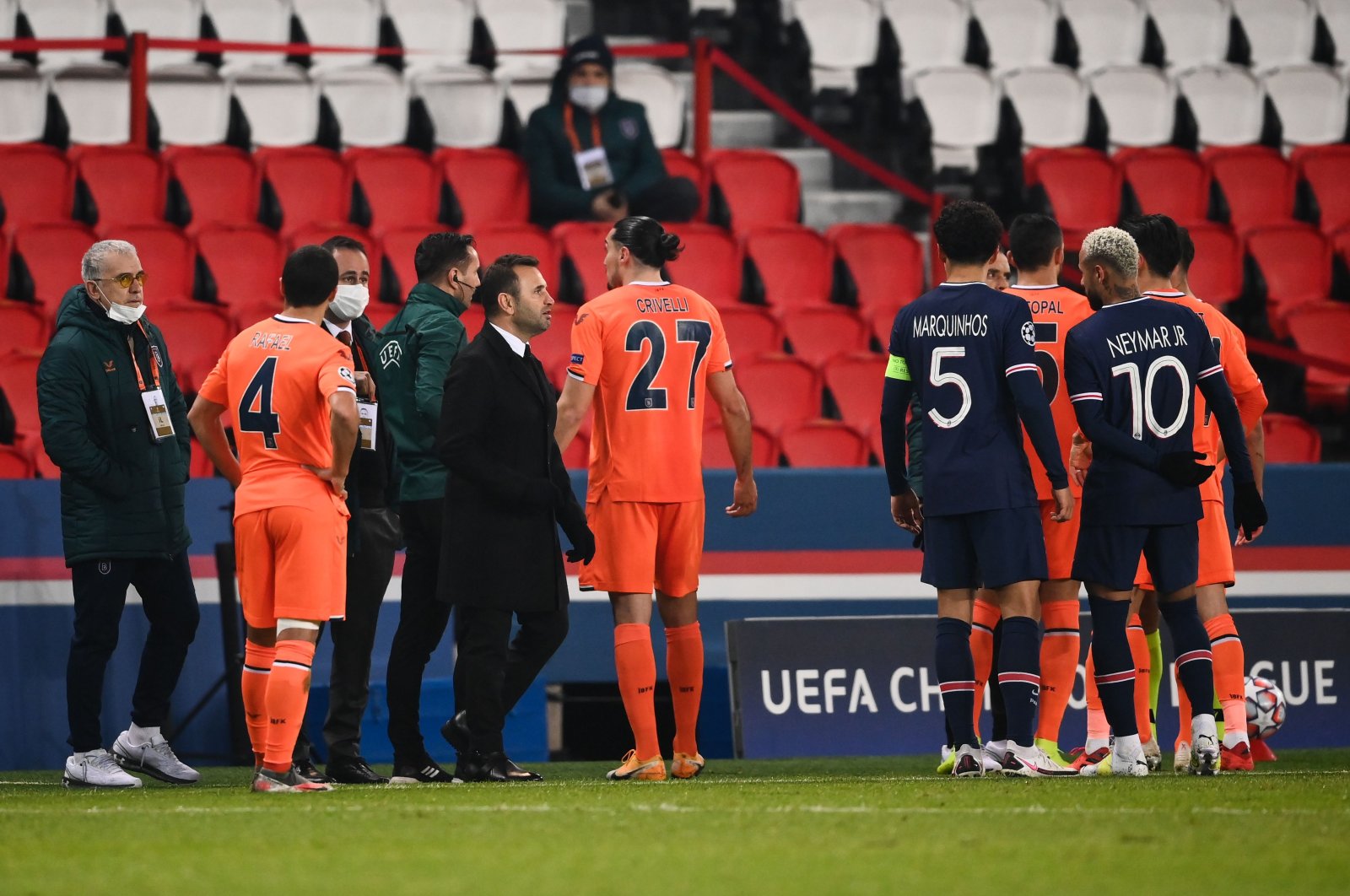 The Champions League match between Paris Saint-Germain and Başakşehir was interrupted after the Istanbul club's players walked off the field on Tuesday after accusing fourth official Sebastian Coltescu of Romania of using a racial slur against an assistant coach.

Players of the Istanbul side were furious after assistant coach Pierre Webo was shown a red card by Romanian referee Ovidiu Hategan, saying Coltescu had used a racial term against Webo, who is from Cameroon, before he was sent off.

Webo was enraged and was heard repeating at least six times, “Why you say negro?” as he sought an explanation from Coltescu.

PSG players Neymar and Kylian Mbappe also demanded an explanation from officials, while Başakşehir coach Okan Buruk said “you are racist” to Coltescu.

The game at the Parc des Princes stopped in the 14th minute, with the players walking off the field around 10 minutes later. PSG players also left the pitch.

Soon after the incident, Başakşehir President Göksal Gümüşdağ announced that the players would not come back on the pitch if the UEFA did not remove Coltescu from the match.

After Gümüşdağ’s remarks, the UEFA replaced Coltescu and pledged to investigate the situation.

“Following an alleged incident involving the 4th official, the match was temporarily suspended. After consultation with both teams, it was agreed that the match would restart with a different 4th official,” the UEFA said in a statement.

“UEFA will thoroughly investigate the matter and further communication will be made in due course.”

Although Coltescu was replaced, the match was rescheduled for Wednesday with a completely different set of officials after several Başakşehir players continued refusing to come on to the pitch.

Seven years ago, Hategan was in charge of a match between CSKA Moscow and Manchester City when City's black players were racially abused.

Michel Platini, the UEFA's president at the time, requested an internal inquiry involving the referee to examine why guidelines were not followed to respond to discrimination incidents during matches.

During the interruption, Başakşehir posted a message on Twitter that included the UEFA anti-racism campaign slogan, “NO TO RACISM.”

After Başakşehir’s post, messages of support and solidarity began to pour in for the Istanbul club.

Most of the Süper Lig clubs, including Istanbul rivals Galatasaray, Beşiktaş and Fenerbahçe released statements on Twitter, saying they were against racism and that they stood with Başakşehir.

"Racism is never acceptable. We strongly condemn it. We will closely follow the matter. We stand by our representative Başakşehir," Turkish Football Federation wrote.

“I strongly condemn the racist remarks targeting Başakşehir’s staff member Pierre Webo and hope UEFA will take the necessary steps. We are against all sorts of racism and discrimination in sports or elsewhere,” President Recep Tayyip Erdoğan wrote on Twitter.

“We stand by Başakşehir’s honorable stand against racism, a crime against humanity,” Çavuşoğlu wrote.

"Whatever the cost, it is important to take an honorable stand," Koca wrote.