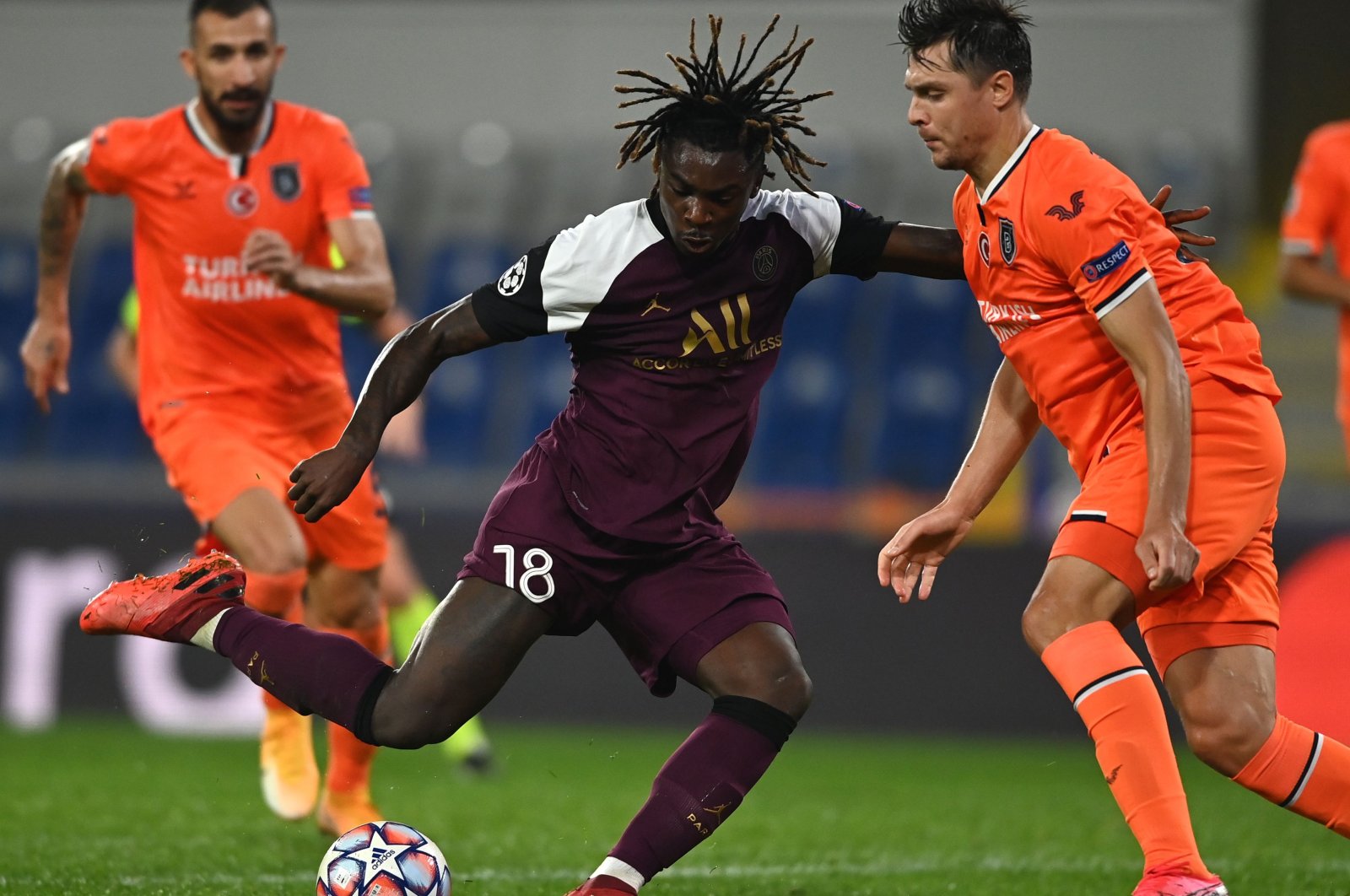 Istanbul Başakşehir’s hopes to secure its first points in the Champions League were crushed on Wednesday after the Süper Lig titleholder was defeated 2-0 by Paris Saint-Germain in Istanbul.

The French powerhouse suffered an early setback during the Istanbul clash, losing Neymar to a hamstring injury. The Brazilian winger attempted to play on with a heavy bandage applied to his thigh, but he was soon substituted by Pablo Sarabia in the 26th minute.

Beaten 2-0 away by RB Leipzig in its Champions League debut after winning its first Turkish title last season, Başakşehir came close to taking the lead in the first half.

Edin Visca twice narrowly missed the target from range, while PSG goalkeeper Keylor Navas made a key save to deny Deniz Türüç in the second half.

The French giants saw Sarabia shoot over to squander a glorious chance at the start of the second half, but Moise Kean's opener at the 64th minute calmed any nerves. Kylian Mbappe played the role of provider with a corner from the left that was headed home from six yards by the unmarked Kean to make it 1-0.

Eleven minutes later, a fumble by Mbappe fell kindly to Kean, who controlled and turned before firing past Mert Günok to make it 2-0 and secure the points.

“Towards the end of the first half we suffered. But we played a good game and held out until the end," Kean was quoted as saying by The Associated Press.

"We played away, which isn’t easy. We held firm and got the win.”

PSG coach Thomas Tuchel's men earned their first three points in Group H after an opening defeat to Manchester United. Neymar’s injury, however, will surely add to Tuchel’s problems as PSG already suffers from a long list of hurt players.

"It's his adductor muscle, but I hope it's not a real injury. He didn't feel good or free and that is why he came off," Tuchel said about Neymar’s injury, according to Agence France-Presse (AFP).

Speaking to the reporters after the match, Başakşehir coach Okan Buruk said he was pleased with the performance of his players despite the result

“We might not have gotten the result we desired, but that was a good game we put on,” Buruk said.

“I congratulate our opponent. If he had a bit of luck, we might have been talking about an entirely different result against such an important opponent, a finalist of the last Champions League season.

Meanwhile, Marcus Rashford came off the bench to score an 18-minute hat trick as Manchester United thrashed Leipzig 5-0 in the other match of Group H.

After making a name for himself off the field through his campaign against child poverty during the pandemic, Rashford excelled in his day job with a trio of well-taken finishes after entering as a 63rd-minute substitute.

The English forward ran onto a first-time pass from Bruno Fernandes and slotted home to make it 2-0 in the 74th, building on the first-half opener by Mason Greenwood that made the 19-year-old forward United’s second-youngest scorer in the Champions League after Wayne Rooney.

Rashford’s quick feet saw him charge through Leipzig’s open defense and drive in his second goal in the 78th, and after Anthony Martial made it 4-0 from the penalty spot, the French striker teed up Rashford who then completed his hat trick in the second minute of injury time.

It was the heaviest loss in Leipzig's 11-year history.

United will take on a double-header with Başaksehir on the other side of the upcoming international break, knowing two wins could allow the team to seal qualification for the knockout stage.

A change of shape by manager Ole Gunnar Solskjaer saw United switch to a diamond formation, and it worked wonders at Old Trafford, with the recalled Paul Pogba surging through midfield and setting up Greenwood for a well-taken opening goal in the 21st minute.