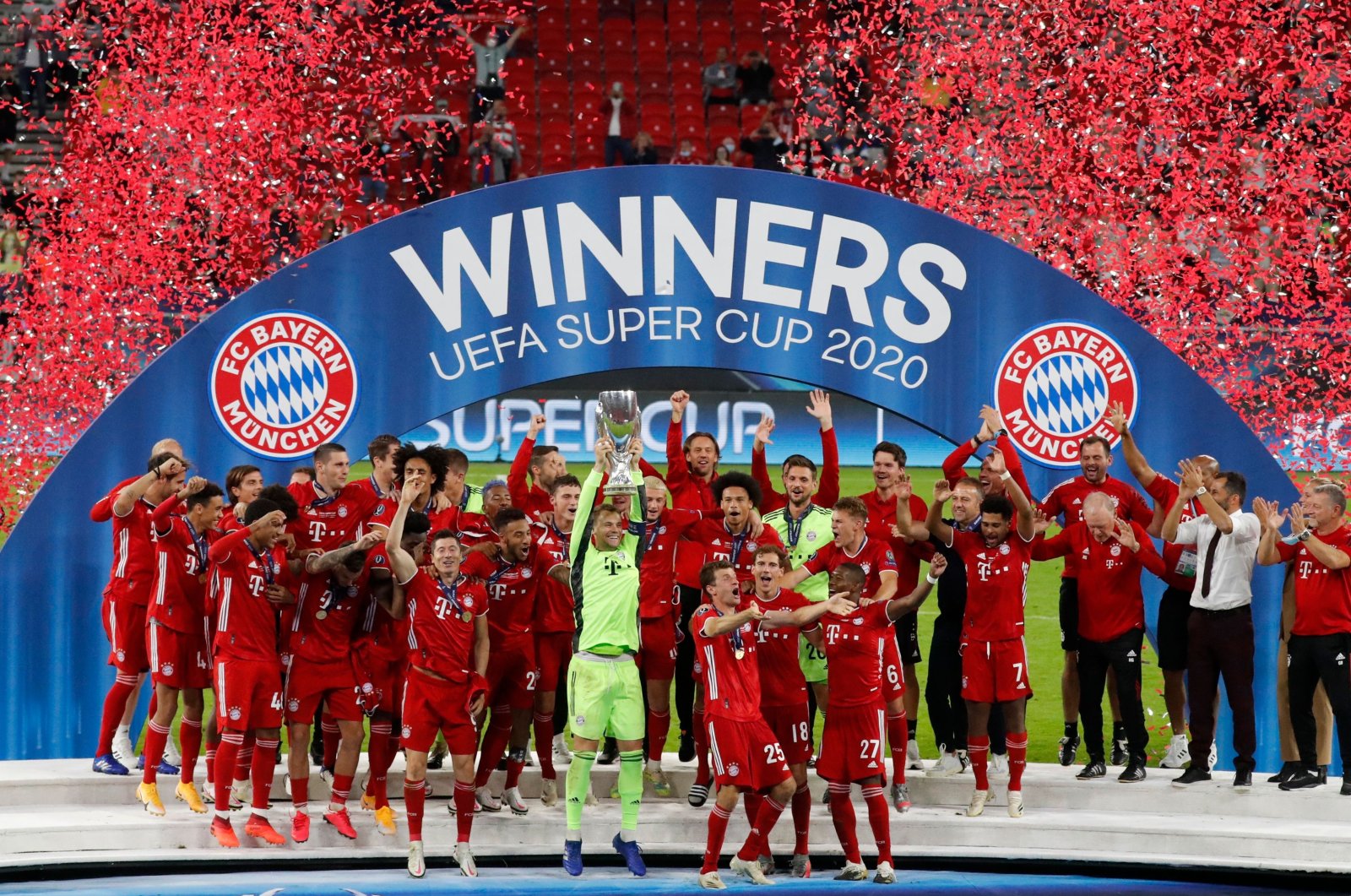 Bayern Munich's Manuel Neuer lifts the trophy with his teammates as they celebrate after winning the UEFA Super Cup match against Sevilla, in Budapest, Hungary, Sept. 24, 2020. (AFP Photo)
by Agencies Sep 25, 2020 12:20 am
RECOMMENDED

Bayern Munich beat Sevilla 2-1 after extra time on Thursday to lift the UEFA Super Cup and complete a quadruple under coach Hansi Flick, in the first European game played with fans in the stands since the sport returned amid the COVID-19 pandemic.

Seven years after scoring another extra-time goal to help Bayern win its last Super Cup, Javi Martinez rose above a crowd of players to head in the rebound when Sevilla goalkeeper Yassine Bounou parried David Alaba's speculative shot in the 104th minute.

It could be one of Martinez's last games for Bayern after chairman Karl-Heinz Rummenigge told German media last month that the versatile defensive player was seeking to leave.

Playing extra time was far from ideal for either team in a season which has started later than normal and will have a more congested calendar amid the coronavirus pandemic. For both Bayern and Sevilla it was the start of a run of four games in 11 days and came barely a month after Bayern beat Paris Saint-Germain in the Champions League final.

Bayern was largely in control of the second half but saw two goals ruled out – one for offside, one for a shove by Lewandowski – and needed Neuer to save Youssef En-Nesyri's shot on the counterattack in the 87th minute.

The game was played with around 15,000 supporters in the Puskas Arena, around a quarter of capacity, as UEFA trialed a partial return of fans in time for the Champions League and Europa League group stages.

However, the recent rise in coronavirus cases across Europe – and Budapest in particular – made it a controversial move.

Around 800 out of the 2,100 tickets sold to Bayern fans were returned ahead of the game after politicians in the state of Bavaria warned fans against going to Budapest. Sevilla distributed around 500 tickets, meaning the vast majority of people in the stadium were Hungarian locals.

Social distancing rules were largely followed at the Puskas Arena, with fans sitting in ones and twos with empty seats in between.

The international travel for Bayern and Sevilla fans also made the Super Cup an outlier. The main European leagues that have resumed with supporters, such as Germany and France, have restricted games to home fans so as not to encourage long-distance travel during the pandemic.