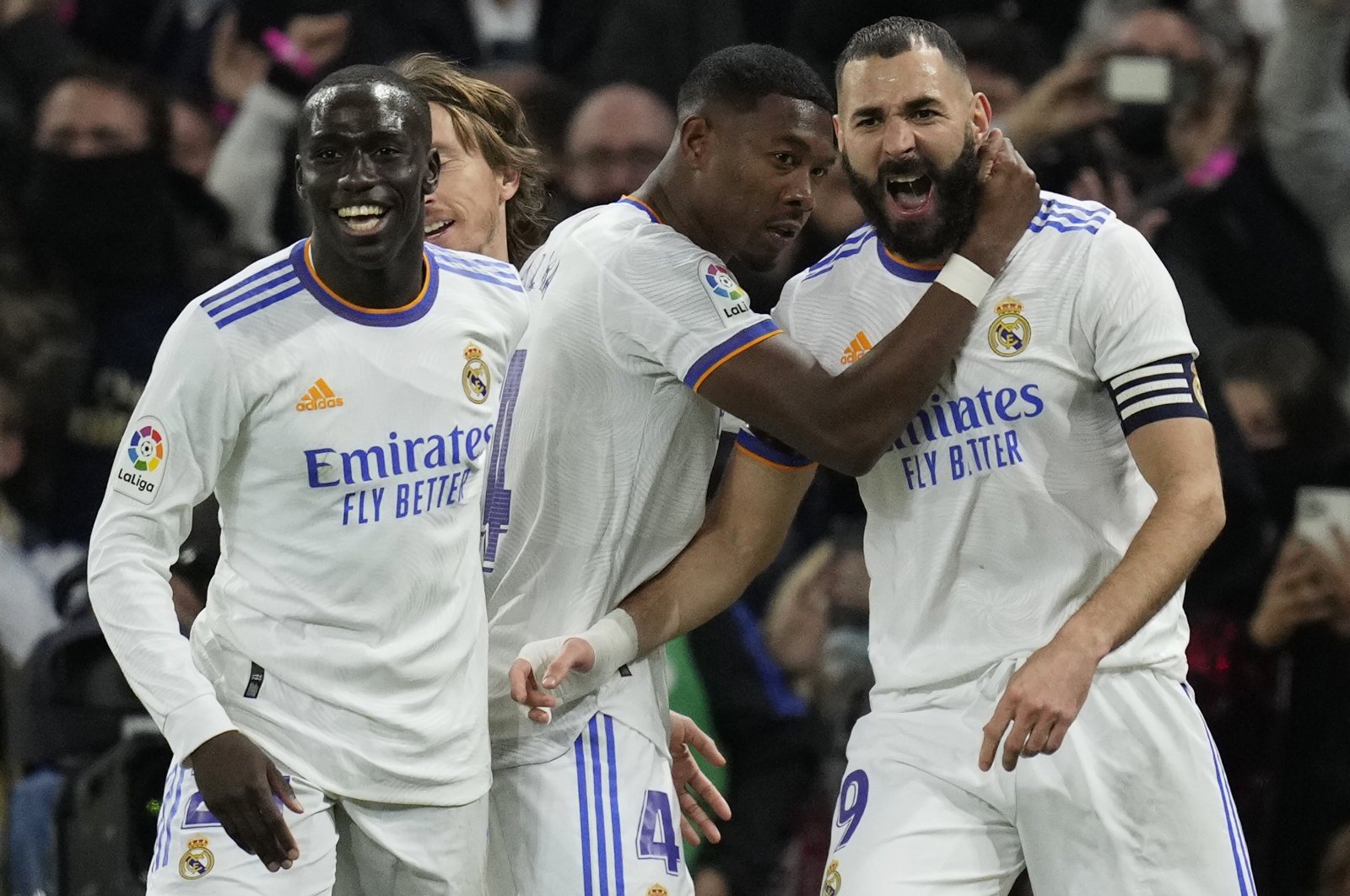 Atletico has a game in hand over its rival but the advantage is considerable and perhaps even insurmountable, even in December.

Barcelona is now 18 points adrift and arguably an irrelevance at the top after it was earlier held to a 2-2 draw away at Osasuna.

Sevilla, who last won the Spanish title in 1946, is the closest challenger, eight points back, and having played a game fewer.

"We are favorites today, of course, you can say that," said Carlo Ancelotti. "But if you relax it can cost you dearly. We have to keep going, to get closer to winning it as soon as possible."

Madrid, though, was ominously superior in a derby that had its occasional bad-tempered moments but was largely neutralized by the home side's dominance at the Santiago Bernabeu.

"The title race is still alive," insisted Diego Simeone. "There is a load of matches left. Madrid has a lot of points, it's true, but La Liga is complicated."

Karim Benzema was passed fit enough to start and then, worryingly for Madrid went off again at halftime, but not before volleying his side into the lead. Marco Asensio doubled the advantage in the second half.

There was never any sign of an Atletico comeback, with the home fans confident enough to cheer their team's every pass in the 70th minute while some of Madrid's defending late on was done at walking pace.

The 21-year-old Vinicius Junior was instrumental again, providing the assists for both goals, but it was the 36-year-old Luka Modric who ran the game, with the Croatian at his majestic, mesmerizing best.

At one point in the second half, the home crowd gave Modric a spontaneous standing ovation and he was so comfortable he even had time to applaud them back.

"It was an incredible performance, nothing else to say, it was spectacular," said Ancelotti. "With the ball, without the ball, the consistency, the personality. It was extraordinary."

Atletico's attacking talents all failed to fire. Luis Suarez started on the bench and came on when Madrid's ascendancy was established.

Joao Felix and Thomas Lemar replaced Antoine Griezmann and Yannick Carrasco at halftime but Simeone's attempts to shake life into his team came to nothing.

The first goal came from a mistake but Koke was in the middle of the pitch when his pass forward was cut out by Modric, the threat was not immediately obvious. But Casemiro played into Benzema and within seconds Vinicius was driving from the right and into the penalty area.

Atletico's defenders were dashing back with such intent they forgot about Benzema behind them, the Frenchman holding his position just inside the area for the cut-back. Vinicius found him with a floated pass and Benzema had time to send a perfect volley past Jan Oblak.

Felix went close soon after the restart but the changes made little difference to the balance of the game and just before the hour Madrid made it two.

Luka Jovic did well to feed Vinicius down the left and as the Brazilian approached the area he surprised everyone by playing right to Asensio, who slid his finish first time into the corner.

Barcelona's nightmare week, meanwhile, ended in more disappointment as it conceded in the 86th minute to draw away at struggling Osasuna.

After losing at home to Real Betis last weekend and being dumped into the Europa League by Bayern Munich on Wednesday, Barca could only muster a point against Osasuna, who sits 10th and is now winless in eight league matches.

The deflation for Xavi Hernandez's team will be heightened by the manner of Osasuna's equalizer, coming so late in the game after two 19-year-olds, Nico Gonzalez and Abde Ezzalzouli, had set them on course for victory.

Instead, Chimy Avila drove into the corner to secure a draw for Osasuna that was as dramatic as it was deserved. David Garcia had earlier leveled for his side two minutes after Nico's opener.

"Our young players are the positive but in general it's negative," said Xavi afterward. "The players who make the difference in the club right now are 17, 18 and 19 years old.

"It is good for the future of the club, but it says a lot about the current situation. They are so young that they cannot be expected to perform every week. It's a difficult situation that needs time and patience."

Xavi has now overseen only two wins in his first six games in charge. "We need a win, urgently," he said.