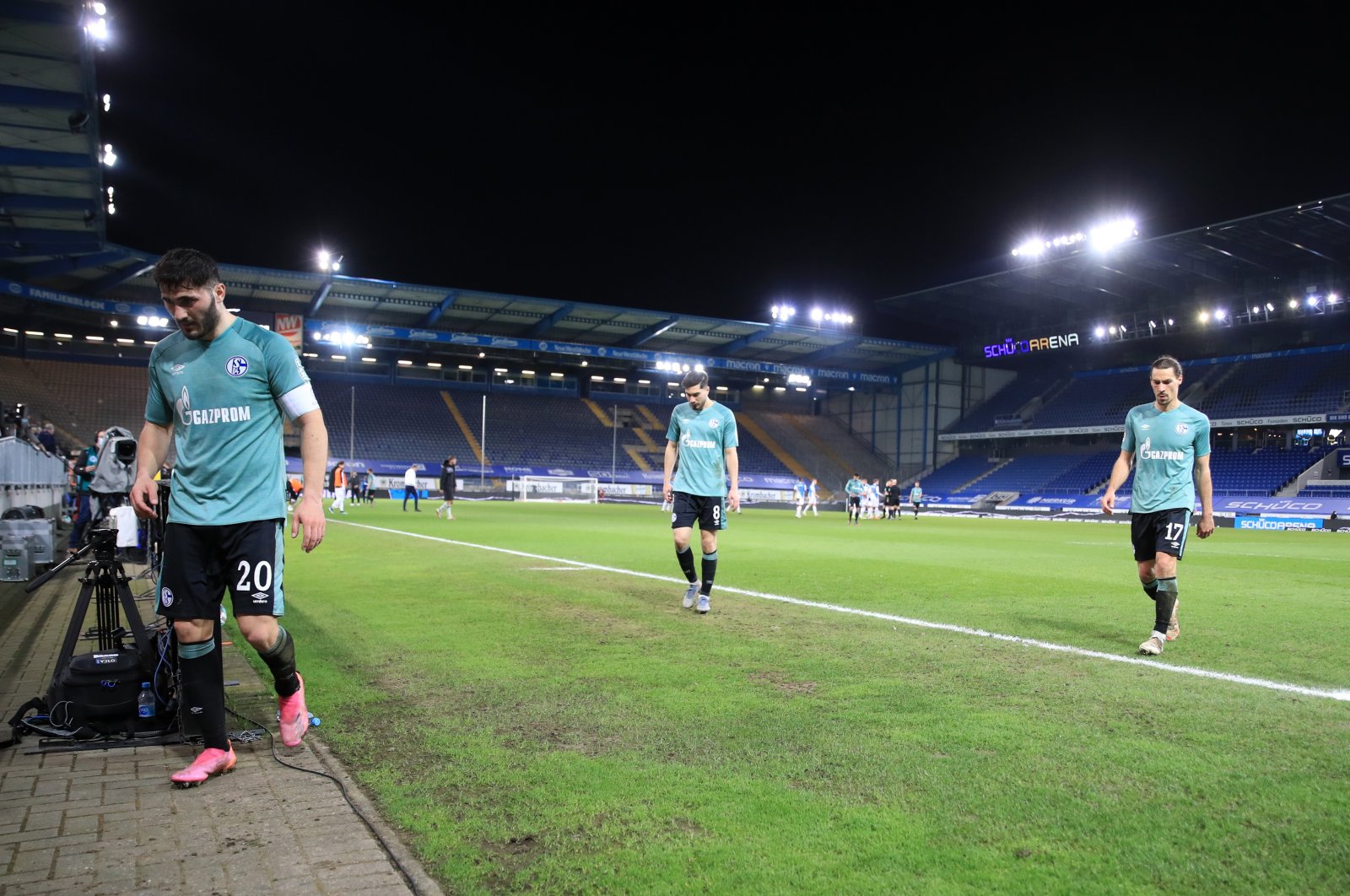 Schalke 04's Sead Kolasinac (L) and teammates leave the pitch after being relegated from the Bundesliga following a defeat against Arminia Bielefed on Tuesday, April 20, 2021. (Wolfgang Rattay/DFL/Pool via Reuters)
by Agencies Apr 21, 2021 12:59 pm
RECOMMENDED

Prominent German club Schalke 04 was finally relegated Tuesday after losing to Arminia Bielefeld in its most recent defeat in a nightmare Bundesliga season, which looks to end in yet another Bayern Munich title.

Schalke, which last relegated in 1988, had been playing in the Bundesliga continuously since earning promotion in 1991. It’s the quickest of the Gelsenkirchen-based club’s four demotions with four games still to play. The club has won the German title seven times, the last of which came in 1958, but have yet to be crowned champions since the introduction of the Bundesliga in 1963.

Having gone through five coaches in the current campaign, Schalke, Bundesliga runner-up as recently as 2018, have conceded 76 goals, more than any other team in an entire season since 2000.

"We knew it was coming, but when you realize it’s over – it’s really brutal,” said former Schalke great Gerald Asamoah, who acts as a link between the club and the players. "I’m bound to the club, it’s been 20 years and I never dreamed it could be so long. I’ve no words.”

Fabian Klos’ 50th-minute goal was enough for Bielefeld to deal Schalke its 21st defeat in 30 games.

Bielefeld, which was promoted last season, moved four points above Hertha Berlin in the relegation zone, though Hertha has two games in hand. The Hertha squad is on quarantine for two weeks following a COVID-19 outbreak at the club.

Goalkeeper Ralf Fährmann saved a penalty from Klos, who was offside when he swept in the rebound. Schalke also finished with 10 men after Malick Thiaw was sent off with his second yellow card in the 71st.

But Schalke is last with 13 points from 30 games and cannot gain enough points to survive even if it were to somehow win its last four games. Relegation follows a dramatic decline for Schalke, which played in the Champions League knockout stages two seasons before. The club is in deep financial trouble and has won only two Bundesliga games all season.

"It's a very bitter hour for all Schalke people,” said Dimitrios Grammozis, the team's fifth coach of the season. "We're brutally disappointed.”

Schalke are among the most fiercely supported clubs in Germany and typically draw more than 60,000 fans to home games. Fan groups confronted the players in the early hours of Wednesday morning when the team returned to Gelsenkirchen, leading to condemnation from the club.

"During this encounter, so far unidentified individual people from the crowd crossed lines which FC Schalke 04 considers non-negotiable,” the club said.

Schalke added that it understood the anger but "the club will never accept the physical welfare of its players and staff being endangered. That is exactly what happened last night due to the actions of individuals.”

Police in Schalke's home city of Gelsenkirchen said up to 600 people, some with pyrotechnics, gathered at the club's stadium to await the team's return. When the team left the bus, "the players had eggs thrown at them and were verbally attacked.” Police said they intervened to stop the incident escalating further. There was no immediate report of arrests but police are still investigating. No injuries were reported.

Bayern is just one win away from a record-extending ninth consecutive championship after it capitalized on second-place RB Leipzig’s shock 2-1 loss at Cologne and moved 10 points clear at the top with a 2-0 win at home over Bayer Leverkusen.

The Bavarian powerhouse can seal the title with a win at Mainz Saturday.

"I told the team before the game, that we could take a huge step towards the title, which we have done. We want to now also win in Mainz," said Bayern coach Hansi Flick.

"Now we're very close. Even if the season didn't go quite to plan, we can grab the championship. That's the main target,” Joshua Kimmich said.

Bayern wasted no time against Leverkusen at Allianz Arena. Alphonso Davies was involved before David Alaba crossed for Thomas Muller to draw a good save from Lukas Hradecky. But the rebound fell to Eric Maxim Choupo-Moting, who hammered home a volley in the eighth minute.

Leverkusen defender Daley Sinkgraven then laid the ball off for Joshua Kimmich to fire inside the left post five minutes later.

It another boost for the club, Leon Goretzka returned from injury when he came on for Muller in the 63rd.

Off the field, Bayern are in disarray since Flick dropped a bombshell on Saturday by saying he wants to be released from his contract at the end of the season. Bayern's senior bosses responded by saying it "disapproves of the one-sided communication by Hansi Flick" and wants to focus on this week's games.

The Bavarian giant was also adamant on Tuesday that it will not join the breakaway Super League.

1. FC Koln captain Jonas Hector scored twice for his team to upset Leipzig 2-1 and boost its chances of survival.

Leipzig dominated the first half in terms of chances and possession but was caught out after the break when Hector – a defender – headed in the opener after Dayot Upamecano left him in too much space at the far post for Jannes Horn’s cross.

Amadou Haidara equalized in the 59th, but Hector scored again a minute later, firing inside the right post after playing a one-two with Ondrej Duda, who set him up with his heel. It was the first time the Germany defender scored twice in a Bundesliga game.

Cologne remained second from bottom in an automatic relegation place, behind Hertha on goal difference.

Also, Eintracht Frankfurt consolidated fourth place and the last spot for Champions League qualification with a 2-0 win over Augsburg.