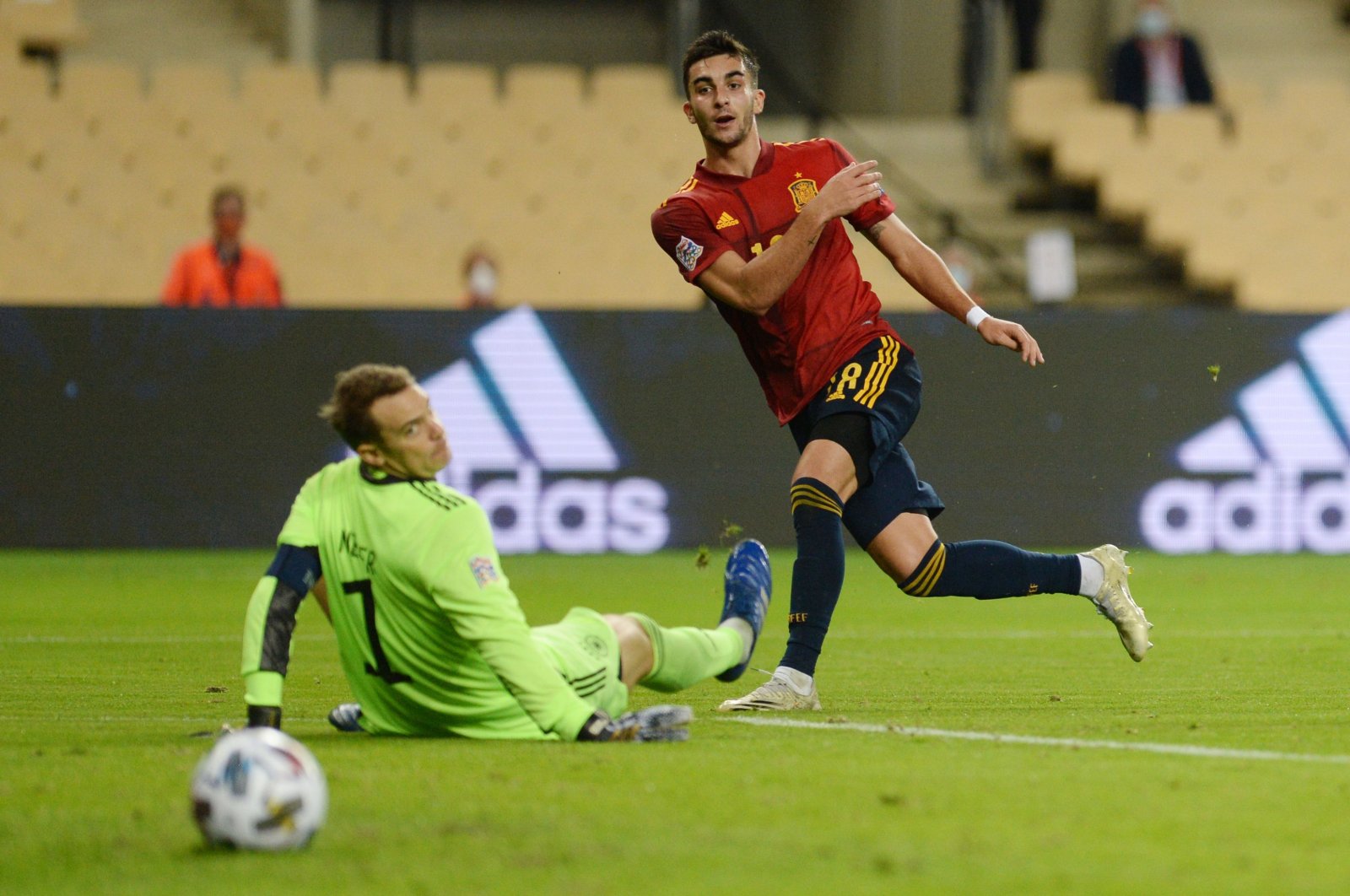 Spain booked its place in the Nations League Final Four in style Tuesday, inflicting the heaviest loss for Germany in 89 years.

Ferran Torres scored a hat trick in a 6-0 win for Spain, which now heads to the semifinals as group winner. The win showed off Spain's strength in depth to keep scoring after a raft of substitutions in the attack.

France had already qualified for the Final Four and remained unbeaten in a 4-2 win over Sweden, which was relegated. Ruben Dias' late goal gave Portugal a 3-2 win over Croatia.

Only three out of four games in League A were played as Switzerland's game with Ukraine was canceled following a coronavirus outbreak in the Ukrainian squad. The Final Four is scheduled for October 2021.

Germany only needed a draw to reach the Nations League Final Four ahead of Spain. Instead, it got a record loss.

Germany's players appeared in shock after the country's worst defeat of all time in a competitive tournament. It was the biggest margin of defeat for Germany in any game since a 6-0 friendly loss to Austria in 1931.

“It’s just bitter and disappointing," was the verdict of Manuel Neuer, who marked his 96th game for Germany – a new record for a goalkeeper – by conceding more than any German keeper in 66 years.

Spain “demonstrated everything we should have been doing with and without the ball,” said midfielder Toni Kroos, according to the Associated Press (AP).

Germany coach Joachim Low said his team simply failed to communicate on the field on a “black day,” but the World Cup-winning coach's selection and tactics face scrutiny.

Low started with a center-back pairing of Niklas Sule and Robin Koch which was quickly overwhelmed, and replacing Sule with Jonathan Tah had little effect. That will prompt renewed scrutiny of Low's refusal to pick the experienced Mats Hummels and Jerome Boateng after dropping them last year to focus on a rebuild.

"I really don't know what happened to the team," Low told reporters after the match.

"We had hardly any chances and we didn't win a single individual battle out on the pitch."

The only negative for Spain was that captain Sergio Ramos went off with an apparent thigh muscle injury, adding to the rash of injuries for various countries' players during the international break amid a packed schedule this season.

Speaking to a broadcaster after the historic defeat, German national team director Oliver Bierhoff has said Low is not in danger of losing his job over the humiliation his side suffered.

When asked if Low would remain the coach until next year's Euro 2020, Bierhoff told ARD TV, "absolutely, yes. This game changes nothing. We still trust Joachim Loew, no doubt about that."

"With the national team, you have to think and analyze from tournament to tournament. We want to achieve the maximum at next year's Euros," Bierhoff was quoted as saying by Reuters.

Olivier Giroud scored twice as France beat Sweden 4-2 to qualify unbeaten for the Final Four from first place in its group.

The win, and a 1-0 victory over Portugal last week, restored France's momentum after its surprise 2-0 friendly loss to Finland last week.

Victor Claesson gave Sweden the lead early on after dribbling through the French defense. Giroud's goals were a statement that he's still relevant for France ahead of the European Championships despite playing just 33 minutes for Chelsea in the English Premier League this season.

Center-back Ruben Dias scored two goals, including a late winner, as Portugal battled to a 3-2 win over a Croatian team which played nearly half the game with 10 men.

Dias scored both of his goals from loose balls at set pieces either side of a goal from Joao Felix which could have been ruled out for a handball in the buildup by Diogo Jota.

Croatia midfielder Marko Rog was sent off after a second yellow card for a foul on Cristiano Ronaldo, who didn't get any closer to Iran striker Ali Daei's record of 109 goals for a men's national team. Ronaldo remains at 102.

Croatia was at risk of relegation but was saved despite its defeat because of Sweden's loss to France.

UEFA will rule on whether Ukraine must forfeit its game against Switzerland after Swiss authorities ordered the whole Ukrainian team into quarantine following three positive tests for COVID-19 reported Monday.

It was the second Nations League game to be canceled because of the virus, and the first from the top-tier League A. Switzerland needed a win against Ukraine to avoid relegation.

Ukraine also had positive tests for the virus last week among players and staff but was cleared to play Germany in a 2-1 loss Saturday.

Germany coach Joachim Low said he was surprised when two Ukraine players who took part in that game later tested positive but wasn't worried his players could have been infected. All German players have since tested negative.

Norway's game against Romania scheduled for Nov. 15 was canceled when Norway was unable to travel to Romania for the game following a positive test for COVID-19 in its squad.