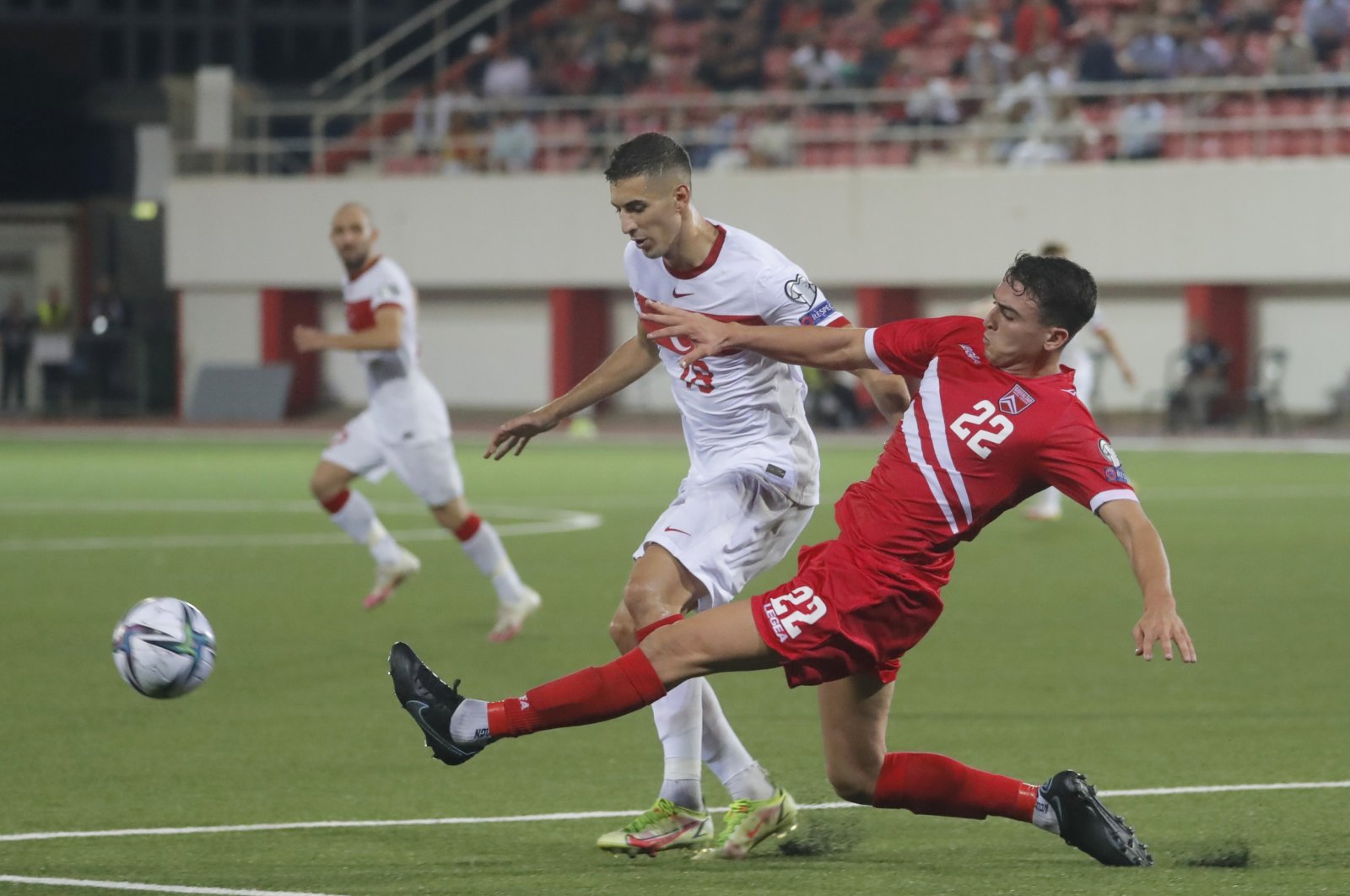 Turkey picked up a 3-0 win over minnow Gibraltar in a World Cup 2022 European qualifier match on Saturday.

The Turkey national team made a great start to the first half with balls played behind the Gibraltar defense. With just two minutes on the clock, Turkey won a penalty after striker Efecan Karaca was brought down in the opposition penalty box.

Striker Enes Ünal, however, missed the opportunity to convert from the spot. Turkey then slowly got locked out by a deep-lying Gibraltar, often defending with as many as eight players in the box.

Ünal, who stepped in for Burak Yılmaz to lead Turkey’s offense, got lost among the crowded Gibraltar defense while Kerem Aktürkoğlu and Yusuf Yazıcı’s attempts to break through all but failed as the first half ended in a goalless draw.

Subs to the rescue

Nevertheless, Gibraltar came close to scoring in the first five minutes. Striker Tjay De Barr hit the bar in the 46th minute and failed to score from close range in the 50th.

Devişoğlu scored in the 54th minute and Çalhanoğlu doubled the lead with a long-range strike in the 65th minute. The other substitute Karaman sealed the deal in the 83rd minute.

In the other Group G matches, Norway beat Latvia 2-0 while the Dutch hammered Montenegro 4-0.

Though it helped Turkey maintain the lead in Group G, the win was less than convincing and serious concerns remain ahead of the Star-Crescents’ next match against the Netherlands on Tuesday.

Turkey currently has 11 points from five matches, followed by the Netherlands and Norway with 10 each. Montenegro has seven, while Latvia has four and Gibraltar is yet to claim a point.

France drew its fifth successive match as Anthony Martial scored his first international goal in five years to earn Didier Deschamps' side a point in Kyiv.

The Manchester United forward, who missed Euro 2020 with a knee injury, grabbed just his second goal in 29 caps to cancel out a magnificent first-half strike by Ukraine midfielder Mykola Shaparenko.

Les Bleus remain four points clear at the top of Group D but have played two games more than Finland, who they host in Lyon on Tuesday.

"We are maybe not in a better situation than we were before the match, but it is not any worse either. It's just one more point when obviously our goal was to take all three," Deschamps told French broadcaster M6.

Ukraine has now drawn all five of its qualifiers so far, including both matches against France.

Finland, in the meantime, clinched a 1-0 victory over Kazakhstan Joel Pohjanpalo's second-half effort.

Erling Haaland converted a spot-kick as he scored for the second game running in Norway's 2-0 win against Latvia, with Mohamed Elyounoussi also on target in Oslo.

Norway and the Netherlands are both a point back of Turkey, who go to Amsterdam on Tuesday.

"Now we must win on Tuesday against Turkey. A victory would put us in an ideal position for qualification," added Van Gaal.

Russia beat Cyprus 2-0 away while Slovenia won 1-0 at home to Malta.

Denmark needed an 85th-minute effort from Jonas Wind to see off the Faroe Islands 1-0 and record a fifth win in as many outings in Group F.

Eran Zahavi followed up his hat trick against the Faroes in midweek with two more goals to power Israel past Austria 5-2.

Aleksandar Mitrovic struck twice as Serbia defeated Luxembourg 4-1 to edge above Portugal on goal difference at the top of Group A.

A late Shane Duffy equalizer salvaged the Republic of Ireland a disappointing 1-1 draw at home to Azerbaijan.