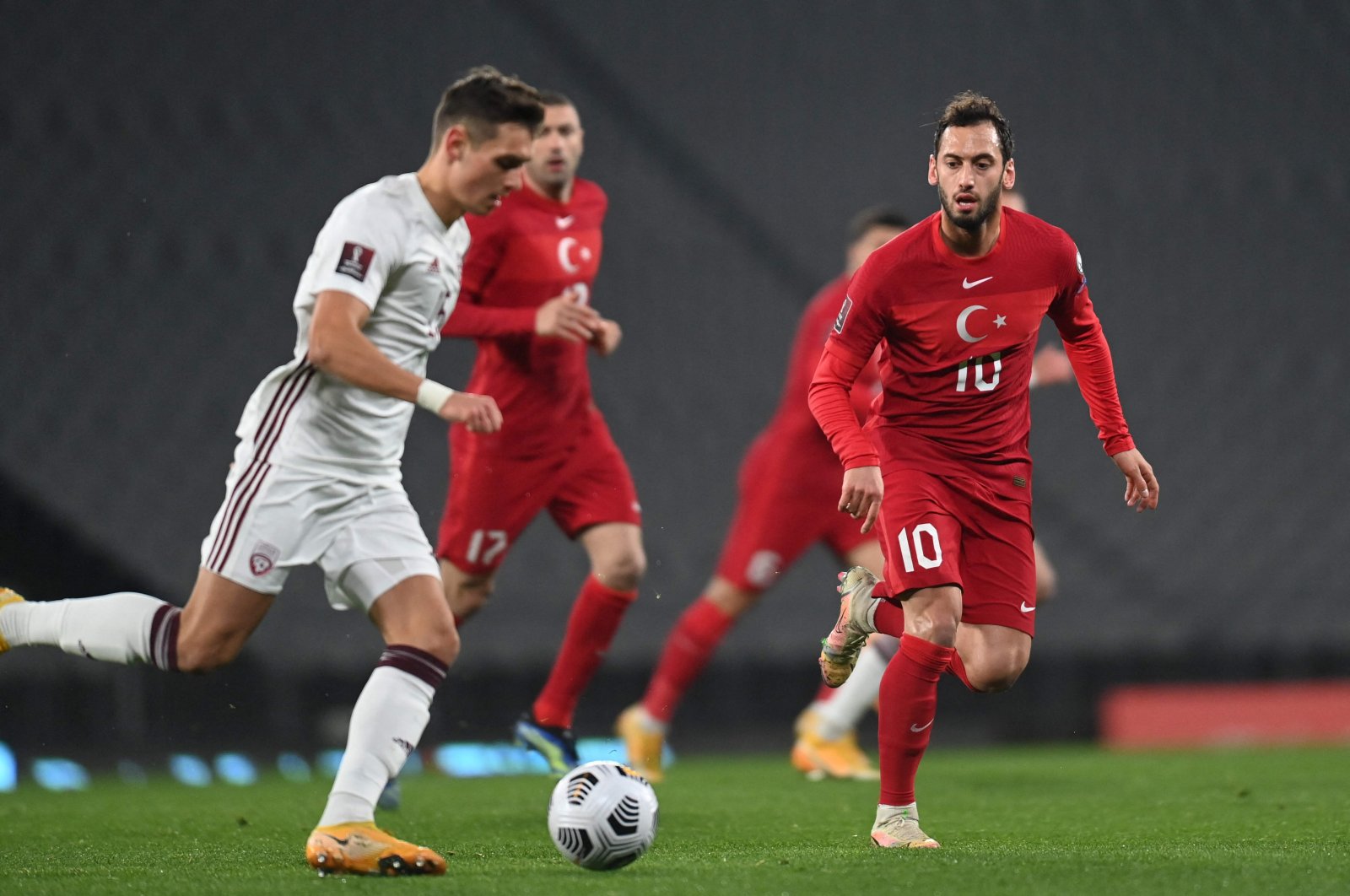 Turkey scored the opener in the second minute as Kenan Karaman found the net with a left-foot strike in the area.

In the 32nd minute, Turkish left back Caner Erkin fired with his left foot to hit the crossbar. But a minute later, Turkish midfielder Hakan Çalhanoğlu's low shot outside the penalty area beat Latvian goalkeeper Pavels Steinbors, giving Turkey a 2-0 lead at the Atatürk Olympic Stadium in Istanbul.

Latvia narrowed the gap in the 35th minute to one as midfielder Roberts Savalnieks scored on a counter attack.

Savalnieks' shot hit the far post before going in.

Turkey led the first half 2-1.

In the early minutes of the second half, Turkey was awarded a penalty kick as Turkish defender Mert Müldür was fouled in the area.

Burak Yılmaz converted the penalty successfully in the 52nd minute to make it 3-1 for Turkey.

But Latvia didn't give up, making it 2-3 in the 58th minute as forward Roberts Uldrikis, who was unmarked, finished with a close range shot. Turkey appealed for an offside, but the goal was valid.

The Latvians leveled the game in the 79th minute as forward Davis Ikaunieks controlled the ball lofted in the area and then took a low shot to score the equalizer. Ikaunieks was onside to score the goal.

Latvia clinched the 3-3 away draw, returning home with a point.

President Recep Tayyip Erdoğan was also in the stadium to watch the match.

The Netherlands, Montenegro and Norway have 6 points each.

Latvia bagged their first point in the group.

Meanwhile, Gibraltar does not have any points, and the Group G underdog has lost all three of their matches so far.

In the next fixture, Turkey will play against Montenegro at home in September.

Elsewhere in Europe, Belgium and the Netherlands scored 15 goals combined in big routs on Tuesday, while Portugal got one from Cristiano Ronaldo in its victory against a Luxembourg team that tinkered with another shock result.

Belgium crushed Belarus 8-0 to stay at the top in Group E, while the Dutch trashed Gibraltar 7-0 to go second in Group G.

Minnow Luxembourg, which opened with a surprising win against Ireland, looked on its way to pulling off another upset after it took the lead against Portugal, but the visitors came from behind to stay at the top of Group A along with Serbia, which earlier defeated Azerbaijan with another double by Fulham forward Aleksandar Mitrovic, reported The Associated Press (AP).

After being held scoreless in the first two qualifiers this year, Ronaldo scored his 31st goal in the World Cup qualifying early in the second half in Portugal’s victory at Luxembourg.

He has now scored for Portugal in every calendar year since his first international goal in 2004 and moved six away from tying the all-time scoring record for a men’s national team. The record of 109 goals is held by former Iran striker Ali Daei, the only other male football player to surpass the 100-goal milestone.

Like Turkey, Russia also missed a chance to win three straight to start its qualifying campaign, losing 2-1 to Slovakia.

The result left the Russians tied at the top of Group H with Croatia, which got its second victory by beating Malta 3-0.

Cyprus earlier defeated Slovenia 1-0 for its first win in the group. It was the fifth consecutive away loss for Slovenia in World Cup qualifying.

Mitrovic continued his hot streak by scoring a double in Serbia’s win at Azerbaijan.

He has scored five goals in the first three qualifiers. He also had a double in the opening 3-2 win against Ireland, and found the net once in the 2-2 draw against Portugal.

Mitrovic opened the scoring in the 16th and netted the winner in the 81st after Azerbaijan had scored in the 59th.