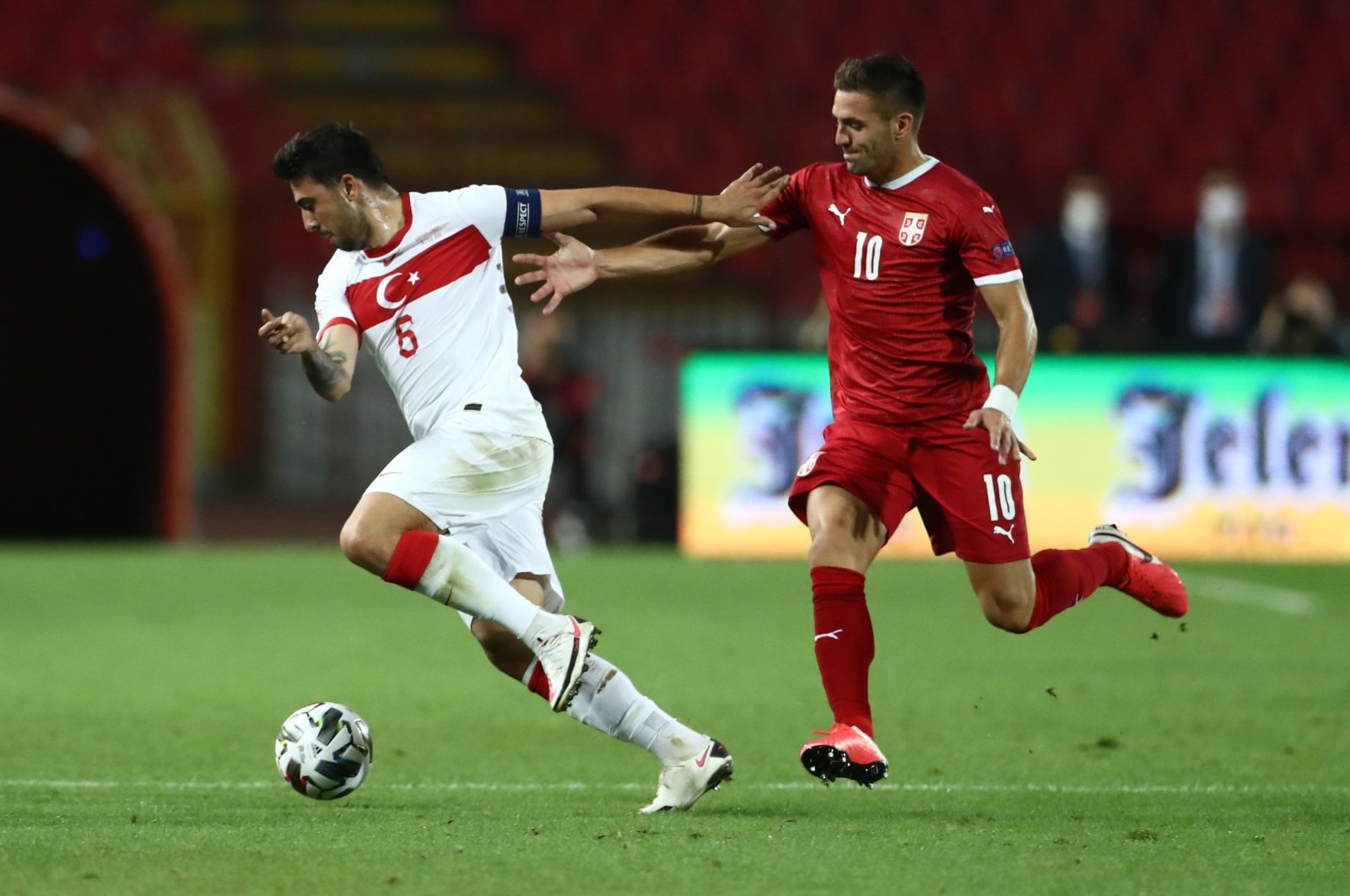 Standing in third place with two points, anything less than a win against Serbia on Wednesday will end Turkey’s chances of promotion in the Nations League

The Turkish national team hosts Serbia for a UEFA Nations League clash Wednesday in Istanbul, where coach Şenol Güneş and his players hope to secure their first win in the tournament.

With three games down and three more remaining, Turkey has two points and is in third place in League B’s Group 3.

Starting the tournament with a stinging 1-0 loss at Hungary, Güneş’s damage control mode saw Turkey avoid further defeats and secure single points against Serbia and Russia in the following games.

But with the group stages halfway there, Güneş will need to shake things up against Serbia at Türk Telekom Arena if he wants to elevate Turkey to League A.

At the top of the group with seven points, Russia’s hold on the top spot was undermined by Turkey with Sunday’s draw, and Hungary didn’t miss the chance to edge closer to the leadership spot. Defeating Serbia 1-0 Sunday, Hungary follows Russia closely with six points.

As Hungary visits Russia for a leadership clash in the group’s other match, Wednesday will offer Güneş a prime opportunity to make up for a slow start.

Güneş’s strongest weapon in his arsenal will undoubtedly be Kenan Karaman, who saved the day against Russia with his second-half equalizer while denying Germany a victory with a last-minute goal during a friendly last week.

Serbia’s ace up the sleeve, meanwhile, will be Sergej Milinkovic-Savic. Lazio midfielder became Serbia’s hero after scoring two goals during last week’s Euro 2020 qualifiers and knocking an Erling Haaland-powered Norway out of the competition.

Meanwhile, in Lisbon, Sweden will visit the inaugural champion Portugal, which was rocked by news of its superstar Cristiano Ronaldo testing positive for COVID-19.
Standing at the top of the A3 group with seven points, Portugal failed to pull ahead after drawing Sunday with France, which follows closely with seven points as well.
Wednesday’s match will be critical for both sides. Winning its last five games and undefeated for the last 18 matches at home, Portugal will hope to make quick work of Sweden to increases its chances of booking a ticket to the playoffs.
For Sweden on the other hand, a defeat would mean almost guaranteed relegation to League B.
While Ronaldo would have been the undisputed star of the match, he will miss the match after the Portuguese Football Federation (FPF) announced Tuesday that the 35-year-old striker has tested positive for the coronavirus.
The FPF said Ronaldo was in isolation with no symptoms and was overall in good health, helping everyone breathe a sigh of relief, but the news surely sent Portugal coach Fernando Santos’ plans into disarray at the last minute.
With Ronaldo scoring in all four of Portugal’s matches against Sweden since 2013 and managing to net seven goals in total, Santos was left to come up with a game plan without his biggest threat against the Swedes.
Standing at third place with three points, Croatia will host France for the other match of the group.

Elsewhere on that night, Poland coach Brzeczek Jerzy hopes he will be lucky enough to field his superstar Robert Lewandowski against Bosnia-Herzegovina.

Lewandowski, who suffered a minor injury during Sunday's Nations League clash with Italy, will likely play Wednesday as a medical examination revealed no damage to his ankle joint, a spokesperson of the Polish Football Association (PZPN) said.

Lewandowski underwent an ultrasonogram examination, which "did not reveal any mechanical damage to the ankle joint," PZPN spokesperson Jakub Kwiatkowski said late Monday as cited by the Polish Press Agency.

The recently named European player of the year Lewandowski only has a hematoma which causes pain, and will be tended to by physiotherapists, Kwiatkowski said.

The risk that Lewandowski will not be available against Bosnia is slim, Kwiatkowski said. It remains to be seen, however, if he will start.

The Bayern Munich striker left the Italy game in the 82nd minute, but the injury may have occurred from a kick in the first half, PAP reported.

Poland stands third with four points in the Nations League Group A1, while Italy leads with five. Italy will take on the Netherlands for the next match in the group.