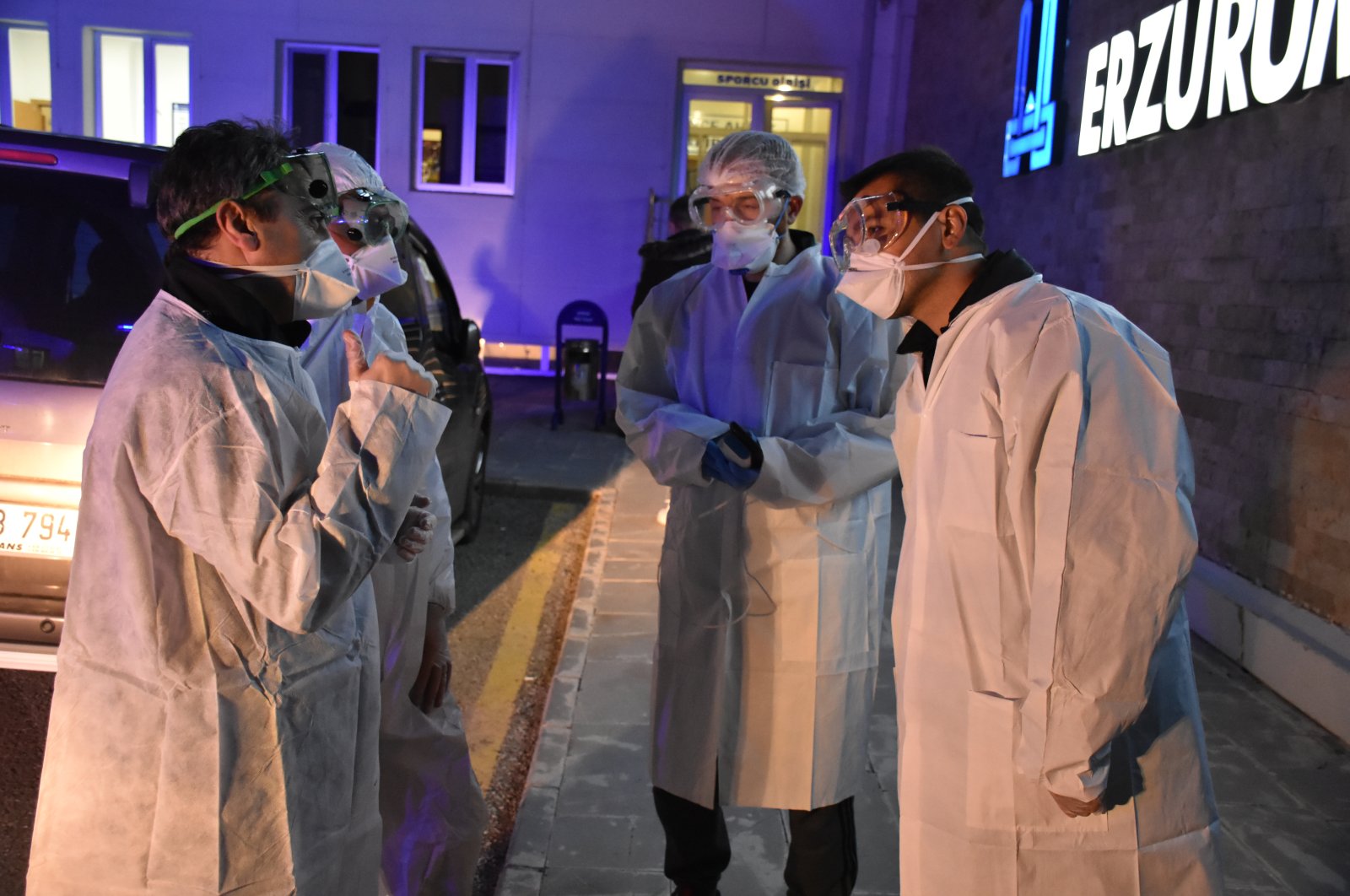 Health personnel talk at the Metropolitan Municipality Erzurumspor facilities as 11 people tested positive for the coronavirus, Turkey, May 13, 2020. (AA Photo)
by Daily Sabah with Wires May 14, 2020 2:17 pm
RECOMMENDED

The Turkish Football Federation (TFF) has confirmed its decision to resume the Turkish Süper Lig, despite concerns over further spreading the novel coronavirus as several clubs reported new infections.

In a statement Wednesday, TFF said the Turkish Süper Lig will resume on June 12 while second-tier TFF 1. Lig will start a week later. All the other leagues, including TFF 2., 3. Lig and regional amateur leagues, are set to resume on July 18.

However, a day after TFF decided to restart the Süper Lig, Istanbul heavyweight Beşiktaş released a statement with some bad news.

“All our footballers, technical team and employees have been tested for COVID-19. Eight of them have tested positive,” the club said in the statement.

Later in the day, the Black Eagles released yet another saddening statement, informing the public that their president, Ahmet Nur Çebi also tested positive.

Beşiktaş is not the first Istanbul team to be hit by the coronavirus. Fenerbahçe reported last week that two of its club employees have tested positive and placed themselves in self-isolation.

But Galatasaray was arguably the club hardest hit by COVID-19. The club's vice-presidents and coach tested positive and recovered.

A prominent TFF 1. Lig team, Metropolitan Municipality Erzurumspor, reported an outbreak of its own.

The club confirmed that four of its first-team footballers and seven other employees have tested positive for the virus. “Yesterday night was so tragic,” club President Hüseyin Üneş told the media.

“We have 12 suspected cases too,” he said, adding that all facilities of the club have been shut down and patients placed in self-isolation.

“Before a road map was drawn out, we should have been consulted,” he said.

Many European countries known for high-tier football, including the U.K., Spain, Italy, France and the Netherlands, still have their respective leagues on hold. Germany has decided to restart the Bundesliga, deemed too early by some and drawing ire from fans, who do not want the matches played without spectators.

A number of European football fan groups have called for the coronavirus-related suspension of matches to continue until spectators are allowed back in the stadiums.

The statement from "United Supporters of Europe," published Wednesday and featuring more than 100 fan groups from countries including Germany, Italy, France and Spain, opposed the restart, saying that financial interests are being put above health.

"We strongly ask (European governing body) UEFA and the national associations to keep the stop and stop the football competitions until crowding the stadiums is once again a habit free of risks for public health," the statement said.

Germany's Bundesliga is restarting on the weekend with games behind closed doors, and there are similar plans in leagues including in England, Italy and Spain.

Meanwhile, Italy’s cash-strapped Serie A clubs are facing a few more hurdles on the way to full competition.

"June 13, let's play," Il Corriere dello Sport headlined on Thursday, specifying, as all the other newspapers did, that "the last word is on the government."

More than two months since the last top-flight game was played on March 9, the 20 clubs on Wednesday picked the mid-June date to begin playing the 12 remaining rounds in empty stadiums.

The government and the Italian Football Federation have reached an agreement to resume team training next Monday.

Individual workouts at camps have been allowed since May 4, with medical exams and frequent tests programmed to monitor possible infection of footballers and staff.

The safety protocol adopted by the federation will now see teams train together in isolation at their camp for at least two weeks, with further planning depending on the government's cautious approach as it monitors the infection, which killed 195 people on Wednesday alone.

Early tests, meanwhile, found four positive cases at Sampdoria and three at Fiorentina. All were said to be asymptomatic and quarantined, bringing the total of infected Serie A players to 23.

After Monday, however, a positive case will extend the isolation period of the entire squad for two more weeks from the day the infection is found.

This seems to imply that a team won't be allowed to play games in case of a positive test result shortly before or once the action has resumed.

The measure has also irked team medics, whom the protocol considers legally responsible for damages suffered from players during the retreat.

"We have already alerted our lawyers to make their observations on the protocol," Enrico Castellacci, who chairs the team doctors association, said this week.

"Once away games begin, the risk of infection is higher. With one case, the league is blocked. This raises perplexities on the real will to restart. (The government) should let us know if they really want it."

Clubs' balances, meanwhile, have been hit by the interruption. Players have accepted pay cuts, but more damage could come from negotiations with television broadcasters.

Sky and DAZN, who reportedly are yet to pay the last installment of 233 million euros ($251.5 million) for the current season, are said to be seeking a discount, given the months without games.

Despite financial troubles, Brescia, Torino and Sampdoria have been lukewarm about recommencing the season, while some groups of fans have flatly opposed it.

Banners against the restart were displayed last week from Roma fans, one reading, "Some die and suffer while others make money: stop the league."