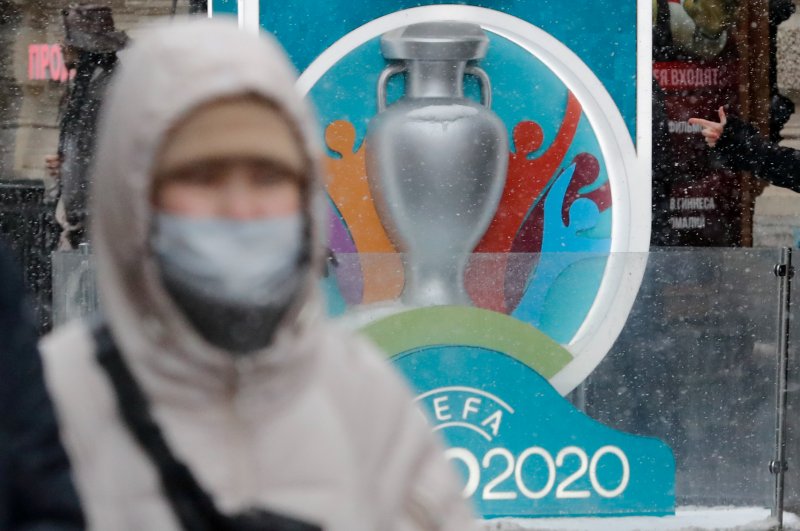 With 100 days to go until the start of Euro 2020, preparations are being fine-tuned for the first European Championship to be played across the continent; however, the coronavirus outbreak poses a potential threat to the tournament

The European football governing body UEFA remains unconcerned about the status of the pan-continental Euro 2020 despite the new coronavirus outbreak spanning the globe.

"We're in touch with the authorities. We're in the hands of the local authorities, and we'll deal with whatever they tell us," UEFA spokesman Phil Townsend said after Monday's executive committee meeting in Amsterdam.

"We're in constant contact with the WHO," he said, using the acronym for the World Health Organization.

While the UEFA hopes for business as usual, the Formula One season is also set to start as planned on March 15 in Australia, while MotoGP suffered a second cancellation in Thailand.

The UEFA's top committee did not consider concrete measures to be taken at Euro 2020 or the possibility of the event being canceled. Rather, the discussion was focused on the playoffs, scheduled for March 26 and 31, in which 16 countries will compete for the four remaining finals berths.

The tournament, hosted by a dozen countries, kicks off in Rome on June 12, with the final slated for July 12 in London.

But Townsend played down how much influence the UEFA may have on the final decision, depending on how events unfold.

"The authorities on the ground are in control of the situation, not the UEFA," he said. "The UEFA is a sports governing body."

Italy has seen several top-tier Serie A matches scheduled for the north of the country postponed in the last two weeks.

Monday's Serie A fixture between Sampdoria and Verona has become the latest match delayed till May, but Italian Cup semifinals later this week are currently to go ahead.

The semifinal in the Italy Cup football tournament between Juventus Turin and AC Milan is to take place without fans from Milan due to the coronavirus epidemic, according to a statement from Juventus on Monday.

Fans from the Lombardy region, where the European outbreak of the novel coronavirus is concentrated, will not be able to attend Wednesday's game.

The ban also applies to people from Veneto and Emilia Romagna, and also the areas of Pesaro, Urbino and Savona, given the higher level of infections there.

Fans able to attend the matches were advised in the statement to come early as extra time would be needed to check people's identity documents.

Despite these measures, Inter President Steven Zhang has accused Serie A President Paolo Dal Pino of not looking after players and coaches.

In an Instagram story, Zhang called Dal Pino "probably the biggest and darkest clown I have ever seen" after accusing him of "playing around (with) the (match) calendar and always putting the public health as secondary consideration."

The president of the Milan club went on to call on the Lega head to "stand up and take your responsibility" while telling fans to stay safe.

Switzerland saw cancellations too, as all first and second-division football matches scheduled for March were called off due to the epidemic.

The 20 clubs that make up the Swiss Football League reached the decision in Bern on Monday.

If the Swiss authorities' ban on events, currently running until March 15, is not extended, football games will recommence on April 4 and 5.

It was unclear Monday whether the Europa League game between Eintracht Frankfurt and FC Basel, planned for March 19, would go ahead.

The UEFA Congress and Nations League draw will take place as planned in Amsterdam on Tuesday.

Teams and equipment are scheduled to arrive as usual in Australia in the coming days despite the increasing number of coronavirus infections and entry bans enforced on several countries.

However, Italy, home to the teams Ferrari and Alpha Tauri and tire provider Pirelli, has yet to be impacted by a ban.

The fourth race of the season, in China, has already been postponed, while the Grand Prix races in Bahrain and Vietnam are in doubt.

Australian race chief Andrew Westacott insisted "we are all systems go" for the Melbourne event.

In contrast, Thailand pulled the plug on the March 22 MotoGP a day after Qatar scrapped the March 8 season opener, and the coming biathlon World Cup in the Czech Republic will take place behind closed doors.

Thailand's Public Health Minister Anutin Charnvirakul told reporters Monday that the event has not been canceled, but it is indefinitely postponed "until it's safe."

MotoGP organizers confirmed the decision, saying it was "evaluating" the possibility of staging the race later in the season.

Czech Prime Minister Andrej Babis announced the March 5-8 biathlon World Cup in Nove Mesto would take place but without fans following a meeting of the national security council in Prague.

Czech authorities will consider further measures regarding large-scale events in the coming days. Organizers had expected up to 100,000 people to attend.

The governing IBU said it accepted the decision and reiterated it "will follow any regulations and demands made by national authorities regarding the spread of the coronavirus."

And the Junior Weightlifting World Championships, due to start March 13 in Bucharest, have also been canceled.

The governing body IWF said, "The health and wellbeing of participants has been a key priority" after accepting the request of the Romanian national federation not to proceed.